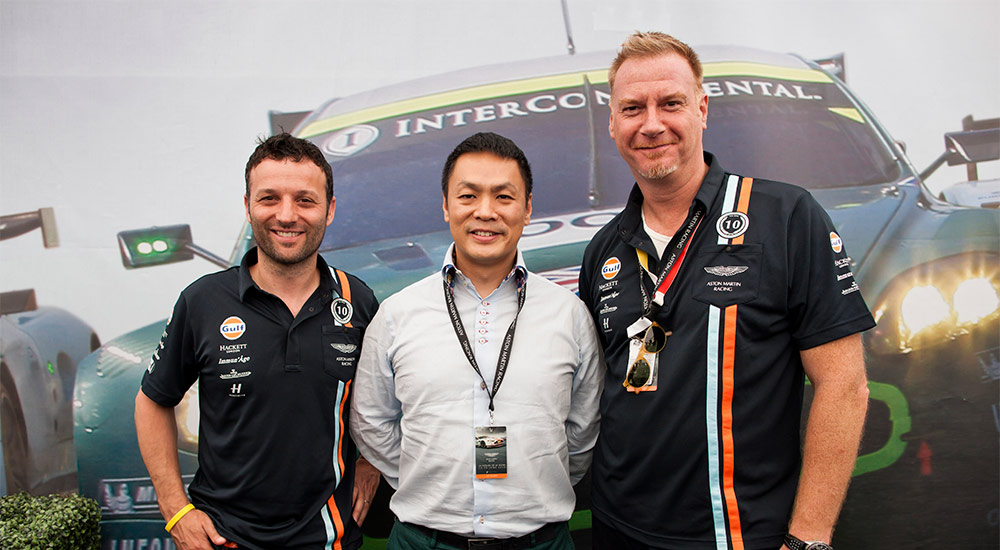 - Aston Martin Racing has signed a partnership agreement with solar...

In an effort to be cool in more ways than one, carmaker Aston Martin is teaming up with thin film solar company Hanergy Global Solar to power up its cars’ air conditioning units with solar power.

The car designer linked with book and movie character, James Bond, is prepping itself for the FIA World Endurance Championship (WEC), where car makers are required to have air conditioning keep driver’s ambient air temperature at or below 90oF (32oC). In an effort to not impact the car’s fuel efficiency, which AC does, Aston Martin is teaming up with Hanergy Global Solar, a manufacturer of thin film photovoltaics to make a PV system that can directly power the car’s air conditioning.

As part of its ambitious growth plans, Hanergy Solar is exploring wider applications of its technologies, investigating how solar power can be incorporated into many new areas to improve efficiency and enhance performance.

Jason Chow, Executive President of Hanergy Global Solar Power & Applications Group said: “We are interested in adapting our world leading thin film solar technologies for cars, so that, for example, a thin layer of cells can be applied to the roof or rear windscreen to power the air-conditioning or other ancillary functions without affecting the performance of the car or using the fuel or battery source.”

“The engineers at Aston Martin Racing are helping us to apply our technology and eventually to put it to the test in the most extreme of automotive environments,” said Chow.

High temperatures in the race car can have extremely negative affects on drivers and, with the WEC travelling to hot destinations such Austin and Bahrain, it is a concern for all of the teams. However, running air conditioning causes loss of power to the engine and negatively affects the car’s fuel efficiency.

“It’s a bit of a balancing game at the moment,” explained Dan Sayers, Chief Engineer at Aston Martin Racing. “The air conditioning system uses engine power, however, keeping the drivers cool and more comfortable is essential. If we can find a solution that keeps the driver cool without the negative effects on performance then it could have a really positive impact on GT racing.”

Aston Martin Racing is continually improving the comfort of its range of Vantage race cars that compete in championships around the world and the technology could be introduced to the V12 Vantage GT3 and V8 Vantage GT4 once developed.

“We aren’t looking at solar power technology for our race cars because it is a green option,” said Aston Martin Racing’s Team Principal John Gaw. “We are looking at how we can use the power of the sun to improve the comfort of our race cars for our drivers and therefore increase our performance on track. However, we are looking at how we can improve our green credentials as a business now that we are moving to new premises.”

US thin film solar panel maker SoloPower Systems has wired nearly $125,000 to the state of Oregon to cover late payments and penalties, it was reported by Oregon Live, an online news site.

The financially troubled business is still paying off a state loan worth $10m, after being shut for about one year. The cash was transferred more than a week after the state sent a demand letter warning that it would launch default proceedings if the loan was not brought current by July 1, when the next monthly payment comes due, it was reported.

According to the news report, Diana Enright, a spokeswoman for the Oregon Department of Energy, confirmed the agency received $124,950 to partially cover the delinquency. Even after the latest payment at the time of writing, SoloPower remains $119,000 in the red.

The loan has been in arrears for five months despite intermittent payments by SoloPower. State officials have yet to pursue foreclosure on the company. route.

SoloPower President Rob Campbell and his team are currently fundraising up to $50m so that the company can restart its facility and pay off its loan balance.

Siva Power, a CIGS manufacturer has received an initial investment in a $15m round to help scale the manufacturing of thin film solar technology, which the company claims can surpass the US Department of Energy SunShot Initiative target of solar module cost of $0.50/watt. The company has also hired solar industry veteran Leroy Luo as president of Siva Power China to lead operations in that market.

The new capital came from four investors, including three existing investors: Trident Capital, DBL Investors and Acero Capital.  The city of Wuxi, China came in as a new investor. The capital will be used to scale up the R&D process by building a small mini-module pilot line, the last step before full commercialization of Siva Power's CIGS technology.

The SunShot Initiative has set a target of reducing solar module costs to $0.50/watt by 2020. Siva Power estimates it can achieve manufacturing cost of less than $0.40/watt after full deployment of its giga-scale production line.

"The addition of new capital and a seasoned energy industry executive provides momentum toward building the solar industry's 'factory of the future' with gigawatt production capacity at the world's lowest cost in solar," said company CEO Brad Mattson. "Quickly emerging as a leading solar market, China is a critical piece of our success, and we are very excited to have Leroy Luo further augment our world-class team."

Based in Shanghai, Luo has spent nearly a decade as a senior executive in the advanced thin film solar industry, co-founding NuvoSun and serving as an executive at Miasole. He has more than 25 years of international business management and engineering experience in high-technology companies in both the United States and China.

"Siva Power has a technology that will help not only China, but the world, achieve the scale that the solar industry requires," said Luo. "I'm very excited to join the Siva Power team and to build a market for the best thin film technology for the future."