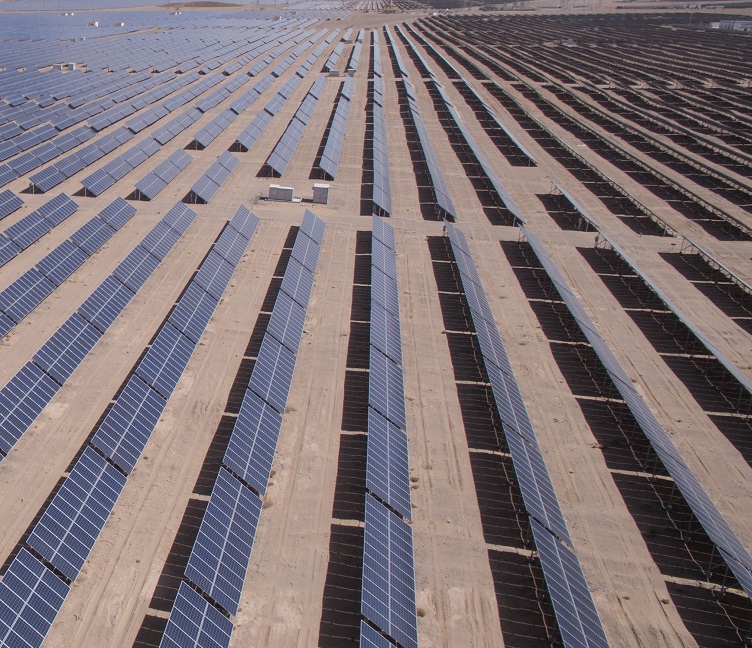 Eight consortiums made it through to the bidding stage, submitting bids between $1.79/MWh and $3.4/MWh, REPDO said.

The Masdar consortium's bid is far lower than the record price of $24.2/MWh for the 1.2 GW Sweihan project in Abu Dhabi, bid by a consortium including Japanese investment company Marubeni, China's Jinko Solar and the Abu Dhabi Water and Electricity Authority (ADWEA).

Prior to the Sweihan bid, a Masdar-led consortium held the record for the lowest PV price with its $29.9/MWh bid for the 800 MW DEWA III project in Dubai. In March, EDF EN announced it had joined the DEWA III consortium.

Masdar confirmed October 9 it has also partnered with EDF EN for the Sakaka Project but would not comment on the details.

"We applaud the Renewable Energy Project Development Office (REPDO) on the transparency and detail of the tender process, which is reflected by the number of participating companies. The tender is ongoing, with the technical and commercial proposals now under review,” a Masdar spokeswoman told New Energy Update.

The REPDO is expected to announce a final shortlist of bidders on November 28, and the project will be awarded in January.

The Sakaka project represents the first round of Saudi Arabia's National Renewable Energy Program (NREP), which sets a target of 9.5 GW of renewable energy capacity by 2023.

The Middle East kingdom is restructuring its power sector as part of its Vision 2030 plan to diversify its economy away from hydrocarbon resources. Saudi Arabia hopes to attract up to $50 billion of investments in solar and wind projects and new development frameworks are boosting investor confidence after years of stunted growth.

Around 3.5 GW of new renewable capacity is expected online by 2020 and Saudi Arabia launched the first round of its NREP in April, inviting bids for the Sakaka project in Al Jouf province and 400 MW of wind power in Tabuk province. Round 2 of the NREP will see a further 620 MW of PV and 400 MW of wind capacity tendered in the coming months.

The International Energy Agency (IEA) has increased its global solar growth forecast by one third due to "continuous technology cost reductions and unprecedented market dynamics in China," the IEA said October 4.

"Solar PV is entering a new era. For the next five years, solar PV represents the largest annual capacity additions for renewables, well above wind and hydro. This marks a turning point and underpins our more optimistic solar PV forecast which is revised up by over one-third compared to last year’s report," the IEA said. 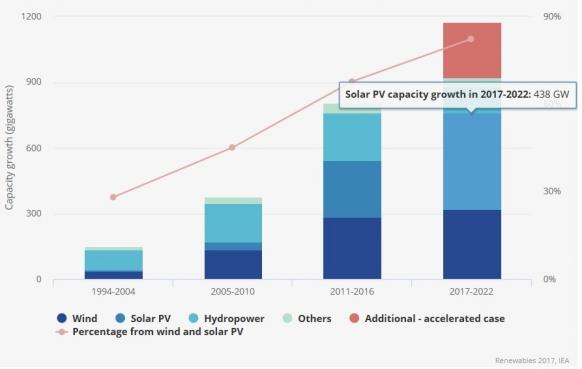 "As such, market and policy developments in China will have global implications for solar PV demand, supply, and prices," it said.

China is currently modifying energy policies to move away from feed in tariffs to a quota system with green certificates.

"Together with ambitious power market reform, new transmission lines, and the expansion of distributed generation, these new policies are expected to speed up deployment of solar (and wind). However, the timing and implementation of this policy transition remains uncertain," IEA said. 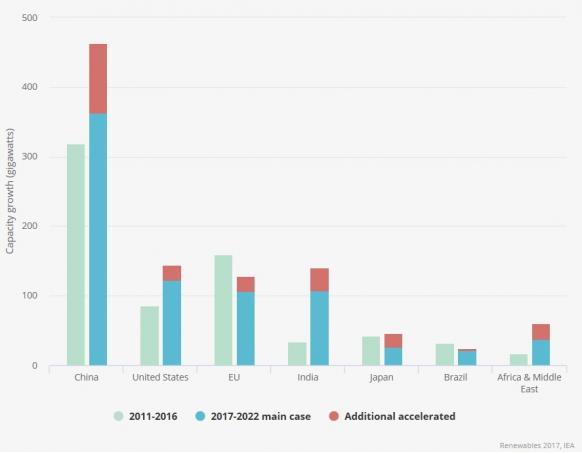 “The war on coal is over,” Pruitt said at a press conference. “Tomorrow in Washington, D.C., I will be signing a proposed rule to withdraw the so-called Clean Power Plan of the past administration and thus begin the effort to withdraw that rule," he said.

The EPA's new proposals were expected to be filed in the Federal Register on September 10, the New York Times reported.

The agency's move follows an executive order by President Trump in March which lifted the ban on Federal leasing for coal production and lifted restrictions on the production of oil, natural gas, and shale energy. The order also directed all government agencies to conduct a review of existing actions that "harm domestic energy production" and suspend, revise, or rescind actions that are not mandated by law, the White House said in a statement.

The federal Investment Tax Credit (ITC) which has supported solar power growth remains in place, for now, and in many states solar power generation has become highly competitive against other generation types such as coal-fired plants.

The U.S. Energy Information Administration (EIA) had said that even if the CPP is not implemented, low natural gas prices and current tax credits will make natural gas and renewable energy the primary sources of new generation capacity.

However, the Trump administration's support for coal and nuclear plants could prolong the lifespans of these plants and delay demand for new capacity.