PV Insider chats with founding Enviromena partners Sami Khoreibi and Erik Voldner on their experience and how the reduced cost of PV is providing a compelling economic case for its regional MENA roll-out. 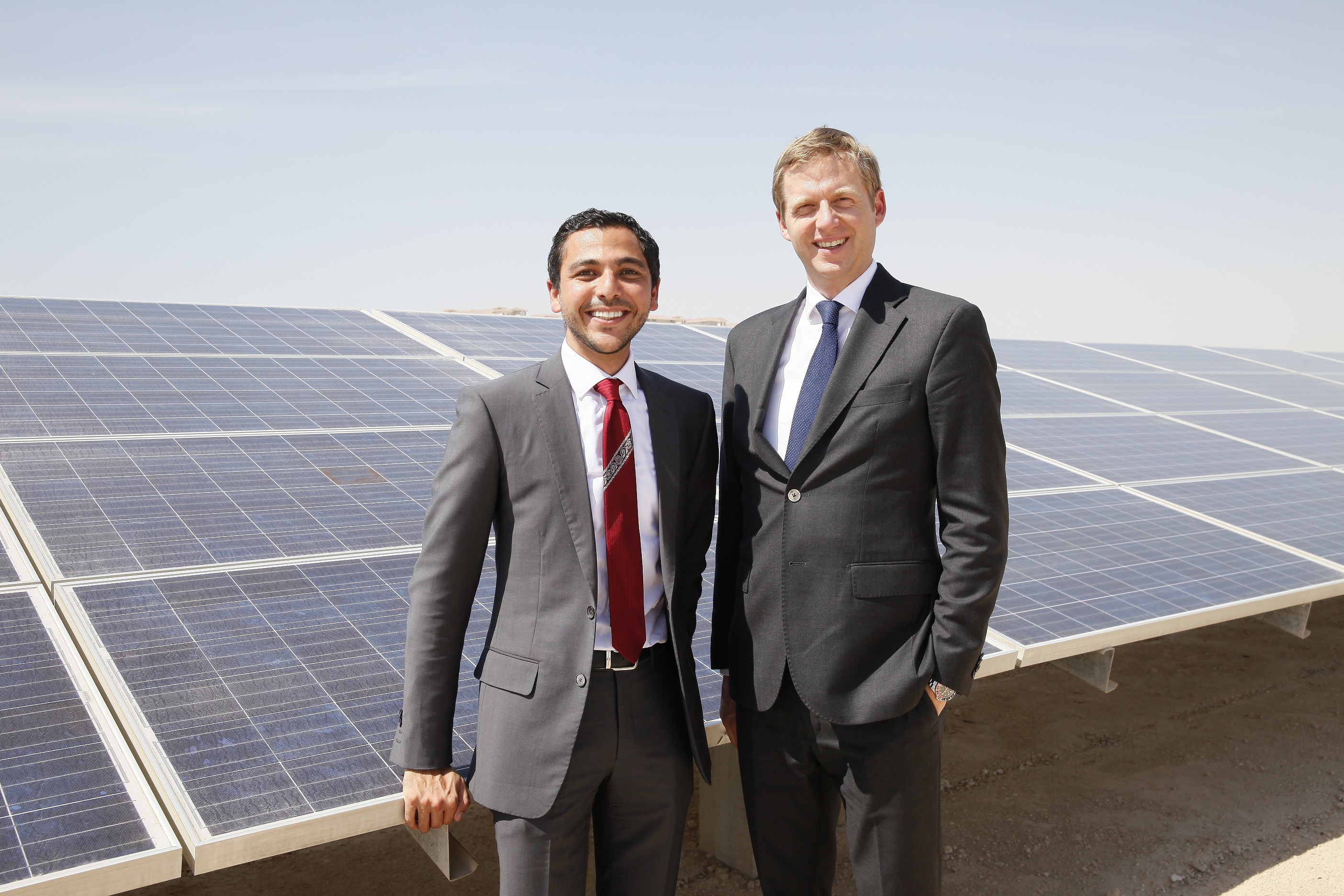 Sami Khoreibi and Erik Voldner on their experience and how the reduced cost of...

As the largest photovoltaic EPC contractor in the Middle East and North Africa (MENA), Abu Dhabi-based Enviromena has constructed 35 out of the region’s 73 grid-connected PV power plants.

Q: You founded Enviromena in 2007 with Sander Trestain and Erik Voldner before there was any significant solar PV activity in the region. What prompted to you to establish the business at the time?

A: When we founded Enviromena, there were no companies looking into building PV power plants in the region. But there was a very large opportunity that we were expecting to come forward in the PV space, specifically in Abu Dhabi with the launch of Masdar. The region was very fitting for PV installations due to lots of sunshine and high power demand in the middle of the day with air conditioning loads, so there was a real opportunity to come in early and establish ourselves.

Q: Enviromena has constructed 45% of the region’s totalled installed PV capacity. What were the most critical lessons that you learned from this wealth of experience?

A: We’ve done grid connections in six countries across the MENA as well as Mauritania. The first lesson that we learnt together with utilities and regulators was establishing the process and creating a degree of comfort in terms of grid connection; showing them that solar was a complimentary part of a PV grid and the whole process of grid connection. Because the first time you’re loading power back into the grid in a distributed fashion with solar plants is often going to be a moment when you hold your breath to see how it works out, and it’s proven to work really well.

After grid connection is the actual operations and maintenance (O&M), and performance of the power plants. We’ve been operating PV plants for over six years in the region. What we’re seeing is that a solar plant here operates as good as it can anywhere around the globe and that can be proven with an example of Germany, which is always pointed to as the number one solar market globally. But a solar panel placed here produces twice as much energy as the one in Germany.

Q: What about the intermittency issue?

A: Intermittency is of course an issue and that’s why PV should be part of a larger portfolio of power in any grid where you have several sources of renewable and conventional energy all working together in the most efficient manner. In the MENA region, though, intermittency is far less of an issue, because we have mostly clear skies.

Q: Who are Enviromena’s stakeholders?

A: Enviromena was the first example of international venture capital (VC) investing in a Middle East company. We’re fortunate to have had three key VC institutional investors come in, which were Zouq, one of the largest clean tech funds out of Europe; Good Energies, which was at the time of investment the largest solar investor globally, and then Masdar came in, becoming our largest minority shareholder. We also have smaller institutional and angel investors that have been very helpful in terms of experience.

Q: Do you think there is enough political will by GCC governments to deploy solar energy?

A: The political will was very much shown through public announcements of renewable energy targets across the GCC, but this is just one small component of what you need to introduce solar programmes. It’s important, but ultimately, we’re selling energy and the underlying economics have to be compelling enough. Solar has to be as competitive if not more competitive than what it’s displacing.

In terms of utilities and governments in many parts of the region being virtually one, the opportunity cost of burning oil domestically for the production of electricity compared to exporting oil at over $100 and even $115 a barrel today is a true cost to governments, their revenues and budgets. So the cost competitiveness of solar today versus oil-fired power plants is very compelling in several geographies of the GCC – Saudi Arabia being the biggest one.

Q: What is the cost of electricity that you’re able to achieve today from PV?

A: We’re able to produce solar at $14 cents a kWh comfortably and below in various parts of the region. Of course, it varies from country to country and offtaker to offtaker.

Q: Given that you’re based in the UAE, the world’s second-largest producer of desalinated water, howdo you see the feasibility of PV-powered desalination plants in the region?

A: Thermal systems are closely tied to CSP, whereas RO systems can be coupled with PV. Whether we use the power produced by PV for desalination or consumers, we can just connect it to the grid. It doesn’t need to be connected to a specific load.

That would allow us to position the PV system in an area with the least amount of dust and humidity and the highest radiation. So it can be used to offset the power used for desalination, but it doesn’t have to be located right beside it, which is usually coastal and high-value land or land needed for industry. It’s a great application for the grids in the GCC, and it doesn’t have to be a direct load.

Q: Are you planning to bid on Utico’s solar desalination plant that will be built in Ras Al Khaimah?

A: As EPC contractors, we’re very interested to see who will be bidding as a developer and asset owner, and then we would be looking to participate on the EPC side.

Q: How do you see the potential of offsetting diesel usage with PV electricity in the region?

A: Diesel generators have a high percentage of usage throughout the region. We see them more as micro grids – a diesel generator providing for not one load but multiple, whether houses, a village or few applications. This is a rapidly growing field and over the last five years, we’ve seen that the technology relating to the control systems for PV and diesel generators has become very viable – it can be installed in the multi-megawatt range. So it’s a great application and has great economics behind. We’ve already built one project in the UAE.

Q: Where do you mainly source your modules from?

A: We are technology agnostic, and use the best panels for the application. Sometimes it’s a requirement from the client for a certain type of technology, sometimes it’s the lowest cost per kilowatt-hour, and sometimes the efficiency is a large concern. We’ve bought from over nine module suppliers globally – from the U.S., Germany, Japan, Korea and China, and we’ve used thin film and crystalline technologies.

Q: Speaking of Abu Dhabi and Dubai’s solar rooftop programmes, which have already been announced, how soon do you think these will be implemented on a large scale?

A: It’s challenging for us to make a prediction on when programmes will come into place. To our knowledge, the rooftop programmes have not been formally introduced. However, there have been rooftop installations throughout the UAE which have probably over the past couple of years shown the impact of distributed solar projects throughout the grid. What’s happening now is that they’re studying the technical impact of distributed solar across the cities. We have built more than 20 rooftop projects in the UAE and outside.

Q: How have you been dealing with the unavoidable issues of dust storms, high humidity, and limited water resources that characterize the region’s environment?

A: When we built the 10 MW plant that was connected in 2008, this was an important question and continues to be. What we’ve learnt over the past six years of operating plants is that we can use virtually no water.

We use a tiny amount of water to clean the large-scale utility power plants over 50-acre sites; just drops of water per panel using a dry-brush method. We tested over 200 types of brushes with different fibres and we were able to join them in one type of brush which is easy on the solar panels. PV panels, unlike CSP and CPV to some degree, can still operate effectively with a little bit of dust on them because you don’t need to concentrate the light on the panel.

Q: Which worldwide markets are you targeting in the next two years?

A: Our focus is on the MENA region, although we’ve done one project in Germany. We’re opportunistic, so if there’s a project where Enviromena has a unique value or competitive edge, then we’ll consider it.

Q: Having recently opened a new office in solar-hungry Jordan, are you planning to establish additional offices in the region in the near future?

A: We opened our second and third offices in Jordan and Dubai at the same time. A lot of solar activity is out of Dubai and international developers and companies have situated themselves here, so we found that it makes sense, in addition to our headquarters in Abu Dhabi and office in Jordan. With the three offices we have, we’re able to meet quite a bit of regional demand.

However, as North African and other GCC markets develop, we’re open to establishing an office when we feel there’s enough underlying business to justify it. There’s no doubt that when the Saudi programme comes into place, Enviromena will have a significant presence in the kingdom.