We chat with solar innovator Professor Stuart Wenham on commercialising his hydrogen passivation breakthrough and halving the cost of PV in the next 4-5 years. 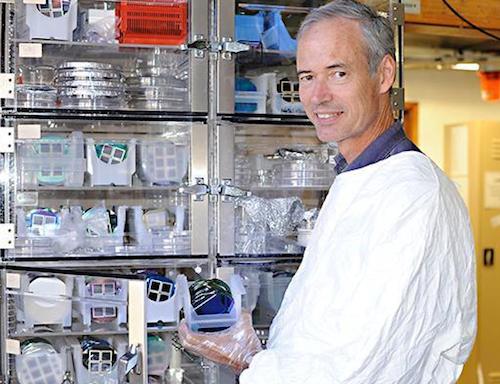 "Because we have the only undergraduate engineering degree in...

Q: What are some of your current achievements at Solar Industrial Research Facility (SIRF)?

A: Our new process takes cheap commercial silicon wafers with contaminants and crystallographic deficiencies, and turns them into high quality wafers like ones used in labs.

Currently, commercial solar cell efficiencies average about 19%. By comparison, in labs around the world, several groups are able to produce about 25% efficiency - a big difference in performance - primarily because labs use the very highest quality wafers.

Silicon wafers for large-scale manufacturing are not much more than a dollar each. The wafers used in labs typically cost hundreds of dollars.

With our improved hydrogen passivation technique, we have demonstrated that efficiencies above 23% are achievable with standard commercial grade p-type CZ wafers. So we're taking 19% up to 23% - even using the cheap wafers.

Q: What makes your technique unique?

A: Hydrogen is such a small atom that it can actually fit inside the silicon and move around inside. Because hydrogen is known to be able to passivate or heal defects inside the silicon, people have tried for a long time to put hydrogen inside silicon, but in general have trouble moving it everywhere that it needs to go, or getting it to bond to the different types of defects. Hydrogen is not very mobile and not very reactive if it's in the wrong charge state.

By understanding the importance of the charged state of those hydrogen atoms, and working out how to control that state, we can increase - by up to a million times - how well we can move the hydrogen atoms around, enabling the hydrogen to bond to these defected regions to fix the defects. Now we can fix up most of the crystallographic defects, and also the recombination that comes from unwanted impurities.

To control the charge state, it’s a matter of giving the hydrogen the right number of electrons. We shine lasers of the right wavelength onto the silicon material; using the photons of light of these specific wavelengths to strip the electrons off the silicon atoms; giving them to the hydrogen atoms, to put them in the charge state we want them to be in.

Q: Have you demonstrated it?

A: One of the nice things about this technology is we have been able to easily demonstrate how well it works.

Because we have the only undergraduate engineering degree in photovoltaics in the world, many of the solar manufacturers around the world have our former students in senior management positions, such as chief technical officers, Vice Presidents of Technology or even CEOs. In particular, most of the top Asian manufacturers have former students of ours in senior management positions.

For example, Dr Shi who founded Suntech was one of our former PhD students. JA solar was also founded by people from our group. Other large Chinese firms, like Trina solar, Yingli Green Energy and Canadian Solar, also now have our former students in senior positions.

So we asked many of the largest cell manufacturers to bring some of their silicon wafers to our university so we could demonstrate to them how well we can improve their quality. Most took us up on the offer, in fact all but one.

We then demonstrated our technology on their silicon wafers by simply putting them through our process, which takes about a minute, and showed them the wafer after our process. In most cases the quality of the wafer went up drastically. So they were very excited and enthusiastic about funding the ongoing development of the technology.

We are already in the process; we’ve just signed up five companies to agreements and we expect another three to be signing up shortly.

Q: What is your path to the assembly line?

A: That is one of our aims. Now we're in the process of transferring our existing technology onto commercial tools so they can be directly used by the solar cell manufacturers; our industry partners.

Separately, we’re also working with several tool major manufacturers, who donate tools to us for use in our Solar Industrial Research Facility (SIRF) - one that’s worth $3m - because they want us to implement our technology on their tools and have our industry partners then use their tools.

All of our industry partners want us to show that our technology can work on commercial tools and that's why we actually set up a separate facility here at UNSW in a separate building altogether, that has commercial tools in it, and then the companies like Roth & Rau, Kuttler, 3S, Schmid and Meyer Berger were all willing to donate tools to us, to go into that new facility.

We expect to have the technology fully developed within three years, with full benefit in perhaps four to five years once large scale manufacturing can be implemented. Either existing commercial wafers can be significantly improved in quality for the same price, or you could make the wafer cheaper and still achieve similar efficiencies, with both approaches expected to approximately halve the cost of photovoltaics in the next 4-5 years.