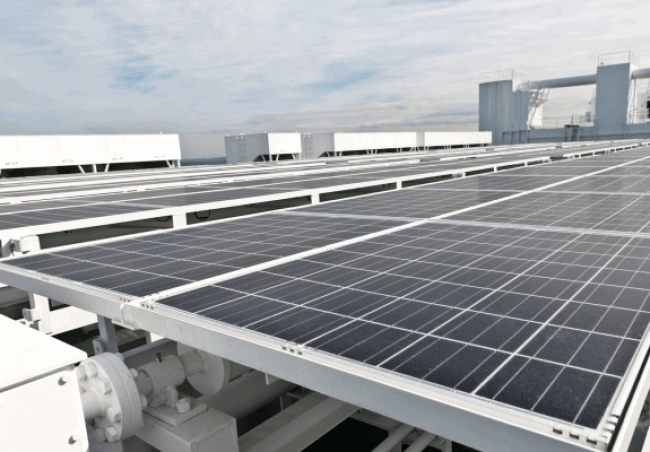 The UK has seen unprecedented growth in this last quarter with hundreds of megawatts of PV being deployed ahead of the Q2 ROC adjustment, it has been reported.

With a coverage of approximately 35,000 square metres, the 5.8 MW system is currently the largest rooftop solar project in the UK. Completed in the first quarter of 2014, it will generate about 5.5 MWh of electricity per year, enough to power 1,500 homes.

According to Yingli 5.8 MW of the PANDA Series modules are installed on the rooftop of a new facility of a  multinational automotive company located in the Midlands, United Kingdom.

The remainder of PANDA modules were being used on other large-scale rooftop projects implemented by Kingspan Energy in the first quarter of 2014.

"The UK has seen unprecedented growth in this last quarter with hundreds of megawatts of PV –being deployed ahead of the Q2 ROC adjustment. We believe that demand for large-scale rooftop projects with a self-consumption model will, in the coming months, continue to provide a stable backbone for the UK market," said Mr. Ramin Dilmaghanian, Business Development Director UK, Yingli Green Energy.

"We are delighted to expand our presence in the industrial and commercial rooftop market in the UK," said Liansheng Miao, Chairman and Chief Executive Officer of Yingli Green Energy.

"The UK solar market has seen significant growth due to stable funding mechanisms, such as the solar Feed-In Tariff scheme and the Renewables Obligation which is the main support mechanism for renewable electricity projects in the UK. We will continue to solidify our leading position in this sustainable market through cooperation with key partners such as Kingspan Energy," said Miao.

JinkoSolar has reported that it will supply 35 MW of solar PV modules to Clenera, a clean energy finance and management firm, for the construction of the Avalon Solar Project. The project is one of the latest to be planned for abandoned land sites, notable former mining sites.

Located in Pima County, Arizona, this large-scale solar system will be built on 500 acres of land adjacent to the Mission Mine Complex. The site was chosen for its compliance with an Environmental Protection Agency programme established with the objective of constructing renewable energy projects on abandoned land, including old mining sites. The project will create up to 300 construction jobs, and will generate nearly $4m in local property tax revenue.

It was reported that 114,750 of JinkoSolar 305W high efficiency PV modules will be used in the project, which is expected to produce enough energy to power over 7,000 homes. The power will be sold to Tucson Electric Power Company, helping to achieve the Arizona state mandate of 15% renewable energy generation by 2025.

Residential solar energy is growing quickly across the Northeast United States. According to the Solar Energy Industries Association (SEIA), the demand for residential solar installations in New York doubled between the third and fourth quarters of 2013, with an increase from 6.1 MW in the third quarter of 2013 to 13.1 MW during the fourth quarter. Additionally, SEIA predicts New York's residential demand for distributed solar to grow to 75 MW by the end of 2014.

Working with its dealer and installer network, OneRoof Energy now allows New York homeowners served by LIPA and Con Edison to go solar with little to nothing down, according to OneRoof. OneRoof Energy also serves Arizona, California, Hawaii, Massachusetts and New York.

"Thanks to the vision and leadership of Governor Cuomo and his Sun-Initiative, there has never been a better time for New York's 20 million residents to convert to cleaner and more affordable solar energy," said David Field, OneRoof Energy president and chief executive officer.

According to the agreement between Yingli Turkey and Tekno Ray Solar, 30 MW of Yingli Solar modules will be delivered in installments from the second quarter of 2014 through the first quarter of 2015. The YGE Series modules will be installed in several large scale solar projects in the southern part of Turkey.

"In Turkey, which has Europe's richest solar resources, we believe that we need to utilise the sun to contribute to both the economy and the environment. At Tekno Ray Solar, we have blazed a trail in large-scale PV project development,” said Altay Coşkunoğlu, Chairman of the Executive Board of Tekno Company Union.

Liansheng Miao, Chairman and Chief Executive Officer of Yingli Green Energy, said the company was delighted to reach a new milestone in the market development in Turkey with Tekno Ray Solar, with whom Yingli has partnered on many projects, including Turkey's first medium voltage ground-mounted project in MW size with grid connection and the first self-consumption project in the Akdeniz Region.

“We look forward to enhancing our presence in this high-potential solar energy market," said Miao.

Marubeni has begun construction of a mega-solar power project in Iwaki City, Fukushima.

The power plant capacity is 2.2MW and is expected to produce approximately 2.5 million kWh per annum, corresponding to the annual electricity consumption of 700 ordinary houses. The generated power will be sold for over 20 years under Japan's feed-in-tariff scheme.

Marubeni, Mibugawa Power Company and JAIC have each brought their strengths to realize this project. Marubeni has a proven track record as the Project Integrator of the Fukushima Floating Offshore Wind Farm Demonstration Project in Fukushima, Mibugawa Power Company possesses strong development capability and management experience of renewable power projects such as mega-solar, and JAIC has aggressiveness for investment in projects that produce long-term stable profits.

Marubeni will conduct stable operation of this plant by utilizing Mibugawa Power Company’s more than 50 years of hydro power plant operational know-how, in addition to its operational experience of the 4.3MW mega-solar power project in Shimizu Town, Hokkaido.

Marubeni already has three mega-solar projects (82MW in Oita, 4.3MW in Hokkaido and 1.1MW in Miyazaki) in operation and two more projects (49MW in Aichi/Mie and 28.3MW in Miyagi) under development.