Competitive without subsidies: Navigating the booming solar market in Chile

By Susan Kraemer on Nov 11, 2014 Solar developers are flocking to the recently opened new market for renewable energy in Chile, a nation dependent on imported diesel, coal and gas, no fossil fuel subsidies and the world’s best insolation. But what are the on-the-ground challenges? 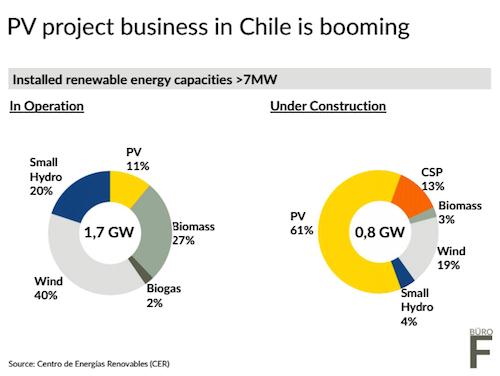 Currently Chile’s electricity market is almost completely supplied by coal, imported from far-away Columbia. Gas is imported from neighbouring Argentina, but the supply is unstable. When Argentina faced shortages with recent domestic demand soaring, it cut exports to Chile.

But there are big changes afoot. A 20% by 2025 renewables requirement is already in place, and this year Chile elected a new government.President Michelle Bachelet approved over 70 renewable projects since taking power.

“The current government changed in March this year and it is very pro-renewable energy,” says Stephan Franz, founder of büro f, which does market research for the renewable energy industry.

“They are very good at managing the processes right now, so I think they will make some substantial progress in this field in the next four years.”

Chile’s renewable energy quota was already moving the market towards solar and wind. There is a fine for not reaching each annual goal. Currently Chile is on track, at about 6% renewable.

“So far everybody has complied with the law, and no one has ever had to pay the fine,” says Marlen Goerner of Germany’s Deutsche Gesellschaft für Internationalle Zusammenarbeit (GIZ) GmbH where, on behalf of the German Ministry for the Environment (BMUB), she supports the Chilean Energy Ministry in renewable topics.

“A lot of the big generators are investing into their own renewable projects already and the others are buying a green certificate from other renewable generation.”

To supply this new market, international solar developers are flooding into Chile. Because the Chilean market is complex, affiliating with local people who understand the local market is essential.

“We have offices in Chile and our Chilean office is largely staffed with local people out of the local power industry.” says SolarReserve CEO Kevin Smith, who is developing both PV and CSP solar projects internationally.

“The solar resource is substantially stronger, and that’s the fuel, so essentially we get 40% more power output in Chile from the same design. So we should be able to reduce our cents per kWh pretty substantially in Chile,” Smith points out. “We are developing a project where we are competitive without subsidies.”

The world’s highest insolation is in the northern half where the SING grid currently supplies the mining industry with 90% fossil-fired electricity, and demand is rising at 3.8% annually.

The southern end is supplied by the SIC grid, starting 500 km above the central city of Santiago - with nearly the entire population of Chile. Demand here is growing at 5.3% annually. Insolation is lower, but still excellent.

In both regions, the combination of the demand growth, the absence of subsidies for fossil fuelled electricity, a renewables-friendly government and the world’s best insolation creates arguably one if not the best solar market in the world.

“Generally in the deserts there's good radiation, but if you don't have the demand-side it's not really viable,” says Goerner. “But here you do.”

Despite the initially large 100MW and over projects first begun by SunEdison and First Solar, smaller projects will ultimately rule in Chile, according to Franz.

Small self-consumption projects under 10 MW will become more attractive than arranging PPAs with utilities in both regions.

Commercial electricity customers can get 100% credit for self-generation; supplying what they need and no more, in what Franz describes as ‘intelligent design” - by contrast with his native Germany which incentivised over-generation through its generous tariff policy.

But self-generation is a limited solar market, restricted to the size of the energy needs any particular business has. Yet, it must not be too small, because in Chile transmission costs must often be paid for, ruling out the viability of very small projects in the kilowatt range.

“If your neighbour or anybody has a PV plant, and then there is another one down the road, and now you are the one applying to connect your PV, your grid operator says that now they have to expand the substation or whatever it is - and you and only you will pay for this,” Franz explains. “It is not shared between all the PV owners, so this makes it prohibitively expensive to build your PV plant because now you have to build and invest into a power line.”

So, though the market is restricted to self-generation, the commercial need has to be large enough to be worth the transmission investment. Fortunately, that is possible in Chile.

In most countries, businesses rent their premises and cannot predict that they can remain in business over the long haul to recoup a solar investment.

However, in Chile, the commercial sector is dominated by a very few families, and their stable, long-lived family businesses get handed down. More than half own their business premises, or could predict a family member will take over in future generations, making solar self-generation an attractive investment for much of the commercial sector.

“Everybody needs cooling. It gets very hot during the daytime, and this could be PV production. Consumption has a peak at midday,” says Franz. “There are a lot of industries and service sectors with such energy demand; shopping malls, supermarkets and logistics centres and so on.”

Other large industrial energy users near Santiago include the meat, fruit packing and the wine industries.

The biggest need for energy is from big mines in the top half of the country. Copper, gold and silver mining dominates the Chilean economy. The large mines buy coal power from the grid. Smaller more transient mines use diesel generators. Neither are subsidised. The needs of the mining companies can be as high as 20 MW.

“The mining industry puts a lot of pressure on the government to solve the energy problems. Energy demand is growing 3% to 4% each year so they are very concerned,” says Goerner.

Goerner continues: “They also use diesel generation in remote areas far away from any grids, so they don't need any incentives to replace it.”

Over the last several years, the bigger international mining companies have experimented with pilot solar and wind projects, learning how the technology can work for their industry.

“It's a very conservative industry of course,” she cautions. “But now they are getting used to it, and I think that they are going to build more and more self-consumption plants.”

Reportedly, not all smooth sailing. The mining companies own their transmission connections to the main grid and they  supposedly do not always play well with others.

“You'd have to directly negotiate with them and obviously are not negotiating on very even ground because you're a small renewable developer versus an international mining company,” says Goerner. “That's something the renewable developers here are complaining about. They have trouble connecting to the lines.”

Chile is clearly an intriguing market that presents great opportunities, but also has some significant challenges. But so far, the prospects remain sunny.