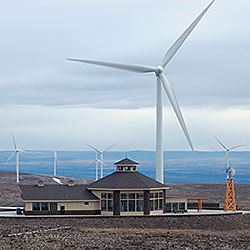 Institutional and corporate investors such as Allianz Capital Partners and Google are increasingly looking at PV to improve the diversity of their renewable energy portfolios.

The move comes amid a generally growing appetite for renewable energy investment in the institutional and corporate investment community, which includes large corporations and investment or pension fund managers.

A report published by Ernst & Young last November found that while 61% of pension and insurance funds, for example, had no renewable energy investments, almost a third of respondents expected their allocation to the sector to increase in the next three years.

In addition, 15% of those looking to invest were expecting to do so heavily, with allocations set to increase by more than 10%.

And while onshore wind and hydro remain the most attractive technology options for investors, accounting for 43% and 38%, respectively, of current or planned investments, solar PV is rising in importance, at 32%.

Critically, many major investors with existing wind or hydro assets are now looking to incorporate PV into their portfolios as a way of hedging against the risks associated with a particular technology.

Allianz Capital Partners, for example, has been investing in wind power since 2005 and now has 43 wind farms in its portfolio, but since 2009 has added seven solar parks to bring its total generation capacity to more than 1GW across Europe.

“Wind resource volatility is an inherent challenge,” he said.

On a year-on-year basis, output from wind assets can fluctuate by as much as 25%, Allianz has found. This is a problem for institutional investors, which seek to regular, stable income streams.

Combining output from farms across different countries helps to reduce this variability, but PV can provide even greater benefits because solar irradiation only has an annual deviation of between 3% and 5%.

In addition, Jones pointed out, wind and solar resource are diametrically opposed during the calendar year so the combination of both asset classes helps to further stabilise intra-year production and profits.

Last but not least, the fact that PV attracts higher incentives than wind in most markets means a diversified portfolio can generate more revenue, although Jones sounded a note of caution over retroactive changes such as those seen in Spain.

“The biggest challenge we face is the economic cycle, where the affordability of energy is much higher up the political agenda,” he said. “While we’re dependent on subsidies, we are at risk.”

Google, another important institutional investor, has similarly looked to strike a balance between wind and PV investments.

Its 2GW portfolio includes USD$100m invested this April in a fund with SunPower Corporation, to finance residential installations, on top of investments in projects across California, Arizona, South Africa and Germany.

According to Allianz, institutional investors like renewable energy investments because they have a long asset lifetime, with relatively predictable cash yields and no correlation to capital markets. And PV is now increasingly seen as a mature technology, like hydro and onshore wind.

Being viewed as an institutional investment target could help the PV industry tap into a major source of funds.

According to a Climate Policy Initiative report called ‘The Challenge of Institutional Investment in Renewable Energy’, published last year, pension funds, insurance companies and other long-term investors control around $71 trillion on assets.

In the US, says Lux Research analyst Fatima Toor: “Large corporations are investingin renewable or ‘clean’ energy generation is because of simple economic benefits like the federal government’s Investment Tax Credit and state-level renewable energy certificates.”

There are also branding benefits for companies such as Google and Intel, which want to be seen as acting in a socially responsible manner. “Consumer views of a ‘sustainable’ company does positively impact business for large corporations,” Toor says.

“Corporations in general are partnering with utilities or green energy consulting agencies to accelerate their investment in green energy technologies.”

Even in emerging markets such as India, says Jasmeet Khurana, head of market intelligence at Bridge to India: “Most prominent developers have a portfolio of power projects which may or may not be limited to solar, renewables or conventional power sources.”

Madhavan Nampoothiri, founder and director of RESolve Energy Consultants, says some investors might want to consider going a step further and integrating wind and solar at a single location. “The main benefits relate to a common infrastructure,” he says.

When considering a combined PV and wind plant, condition monitoring is a must. For example, when wind exceeds 25 miles per hour for over 15 minutes, solar panels, for example CPV panels, can go into what’s called ‘stow’ position. When in the stow position, they do not produce power, which will ultimately impact the overall production of the plant, but that may not be such a problem when wind turbines kick inn during night winds.

Desert conditions, where CPV and wind farms are often located need to take into consideration that dust can collect. And when the dust collects on the Fresnel lenses, it hinders production, so monitoring and cleaning are required.

An example of a hybrid plant working today is located near Ellensburg in Kittitas County, Puget Sound Energy’s second wind facility — Wild Horse Wind and Solar Facility – has 149 turbines spanning across 10,000 acres. The facility can generate up to 273 megawatts of electricity, enough to serve more than 80,000 homes. Wild Horse came on line in December 2006, and was expanded in 2009.Wild Horse also contains one of the Pacific Northwest's largest solar power arrays.

The solar array is the largest utility-scale solar demonstration project in Washington and provides for much of the facility’s on-site energy needs. Capable of generating 500 kilowatts (kW) of electricity, the solar array takes advantage of the clear skies enjoyed by Central Washington, which receives as much annual sunshine as Houston, Texas, according to the utility.

As Nampoothiri simply puts it: “Solar is available during daytime and wind is strongest during night. This helps in effective use of evacuation. When land and evacuation become constraints, squeezing in both solar and wind helps in efficient use of the available land.”