Power technology firms such as GE and ABB have developed more heat-resistant materials and self-regulating technology to build higher-voltage solar inverters which will lower the capex and opex of plants, company directors told PV Insider. 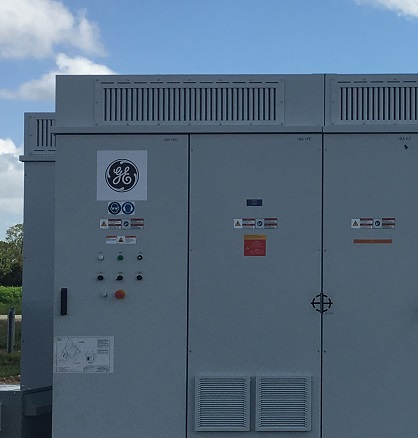 GE is using silicon carbide to accommodate higher temperatures inside its high-voltage inverters.

The International Renewable Energy Agency (IRENA) has predicted average solar system costs could fall by 59% by 2025 and price reductions will increasingly depend on balance of system (BoS) components such as inverters, as well as operations and maintenance (O&M) efficiency.

Inverters are a main source of PV plant failures and suppliers have sought to improve performance and reliability, inventing new materials and systems while harnessing big data to increase yields. Some suppliers are developing higher-voltage central inverters to reduce the cost per watt, while others are improving the performance of smaller three-phase string inverters.

Inverters represent 5 to 10% of U.S. utility-scale project costs, according to the Solar Electric Power Association (SEPA), and IHS Markit predicts inverter prices will fall 8% per year until 2020. Global PV inverter shipments grew 42% in 2015 to 59.7 GW and the inverter market will grow 11% per year from 2016 to 2020, according to GTM Research.

While central inverters are the most commonly-used inverter type in utility-scale plants, the market penetration of three-phase string inverters is rising fast.

*Note- the 1 GW plant in Ningxia, China was not fully completed at time of analysis in 2016 and does not use 100% string inverters. Data source: IHS Markit

Three phase string inverters are forecast to represent 40% of global PV inverter shipments to utility-scale plants by 2020, up from 20% in 2015, Gilligan said.

PV power plant operators favoring string inverters say it's easier to identify failures and make replacements in the devices in comparison with central inverters. Others say the increased number of units in a string inverter system raises BoS costs and also raises the number of potential failure points, according to data collected by IHS Markit.

As competition intensifies between inverter suppliers, GE has launched a new 1,500-volt DC central inverter with power devices made from silicon carbide, which can increase the efficiency of utility-scale PV power plants to 99% weighted power conversion efficiency.

Silicon carbide is a high-efficiency material which supports high temperatures and frequencies and reduces energy losses in solar applications.

The new technology will increase the output efficiency of the power plant by 1%, translating to a gain of around $2.5 million per 100 MW over a plant’s lifetime, according to GE calculations.

Another $800,000 can be saved over the lifetime of the plant by adding an optional feature to the system that enables the inverter and transformers to be disconnected at night, reducing losses when the plant is not generating power, according to the firm.

GE’s Oram said the new inverter can function at temperatures 14% higher than other traditional technologies, reducing degradation in performance and increasing the lifespan to over 25 years under normal conditions. Large inverter suppliers have recently guaranteed lifespans of 20 to 25 years and this continues to increase as technology is improved.

Power technology group ABB has improved its high voltage inverter by patenting a central inverter technology that uses a self-contained liquid cooling system to regulate temperatures of the equipment, removing the need for other large components like pumps, valves and inhibitors inside the machine.

The cooling system also uses phase transition and thermosiphon technology to avoid external air entering the critical compartments of the inverter, which reduces the risk of corrosive gases or sand entering the inverter and causing damage.

“We have designed the machine to have very low maintenance needs,” he said.

By using fewer large components, ABB has reduced the dimensions of the inverter, lowering installation costs and increasing the estimated lifetime of the inverter to 25 years.

Further gains are being made in operational efficiency by using big data and the Internet of Things (IoT) to identify potential inverter failures.

Energy management and automation company Schneider Electric has developed an inverter connected to a cloud computing system which collects data to monitor performance and estimate component lifespans in order to optimize O&M activities.

The cloud-connected inverters are guaranteed at 99% reliability for a 30-year lifespan, according to Arnaud Cantin, vice president of Power Plants and Energy Storage at Schneider Electric.

“We are trying to make the best of the existing technologies from the hardware perspective, and bring benefits on the [operational expenditure] side,” he said.

Alencon Systems developed new inverter technology which maximizes the amount of energy harvested at the string level and escalates the voltage to a centralized DC bus.

The new inverter technology is able to reduce BoS costs between 15% to 20% in comparison with other traditional inverters, Hanan Fishman, Alencon Systems' president, told PV Insider.

In addition, the company’s new IoT software enables operators to monitor current and PV string performance, as well as semiconductor and control board temperatures. The system uses a visual SCADA platform and a series of sensors embedded in the hardware.

This combined approach of hardware inventions to raise performance and software solutions to lower O&M costs will be a key trend going forward, as the maturing of the PV module market focuses operators' attention on BoS components.