Aside from its promising CPV business, Cool Earth develops and builds solar power plants for commercial and industrial settings, both on rooftops and on-ground plants. Cool Earth Solar CEO Rob Lamkin talks to us about the company's successful business model and the re-emerging promise of CPV. 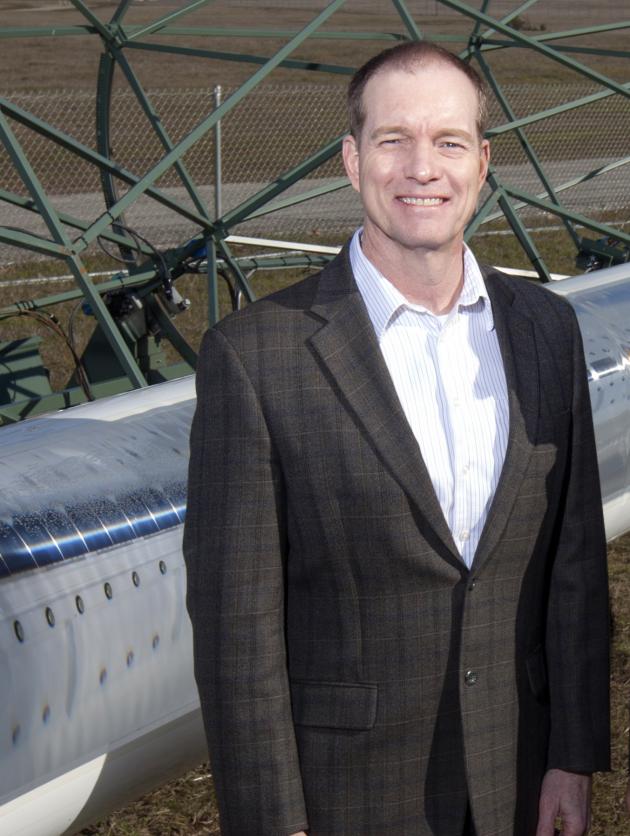 “Two to four years ago the reaction was negative against all CPV companies....

Q: Do you really rely on the same thin plastic film found in potato chip bags?

A: “Yes. Five billion pounds of it is produced every year in the United States. Walk down any grocery store aisle and you see it. There are so many manufacturers that make this thin film plastic. We have a special formula and some unique things that we do to the film.”

Q: Where does your CPV technology currently stand?

Q: It sounds like you’re still in the research phase for your technology.

A: “Although this is a pilot, I’d make the argument that the site represents a commercial deployment because it is grid connected. This is an operating power plant and the electricity we make is powering part of the National Laboratories. We have about 10KW out there now of our Gen 5 version, which is our latest iteration of the product.”

Q: It’s not cheap to fund the research for CPV projects. How is Cool Earth funded?

A: “We did an angel round in 2007 and raised $1m. Then we did a $20m Series A round in 2008. In 2011 we looked to do a B Round, but it was very hard to get funding during that period, and instead we found it easier to fund the company with our solar plant project business. We’ve been doing that for two years and we’ve got about $2m worth of PV projects, and of course it ramps up from here. We’re using mostly flat panel, but our CPV technology will be included in more projects in the future. That side of the business is growing.”

Q: So the commercial and industrial solar plants you develop fund the development of your CPV products?

A: “Yes. Our CPV product has taken longer to get market ready, so we’ve just been using flat plate at the plants for now. Eventually, they will utilise our CPV technology. Solar is challenging for a lot of reasons. Most people in the CPV space try to develop products on the backs of investor and VC money. That’s not a bad way to do it until the money runs out.”

Q: Give us an update on your solar power plans business.

A: “So we have a very large utility scale project in development, but most are commercial industrial rooftop projects. We installed a 170 kW solar facility on the roof of All American Label, and provided a full turnkey solar solution, which included permitting, design, procurement, and installation. We are also performing the operations and maintenance of this new solar installation.”

Q: What competitive advantages does Cool Earth Solar have, and how can provide solar power more affordably than others?

A: “For our equipment to capture the same amount of solar energy as more traditional solar equipment, we use less than half the materials in terms of weight and mass. When you factor in the fact that the little material we do use is a whole lot cheaper, that’s how we drive down the cost.”

Q: Could you take us through some of the benefits of outsourced manufacturing?

A: “We think of ourselves as being truly fab-less. We don’t have to build a factory to build our materials; it’s all contracted out to existing factories. What we have is strong patents and unique IP and a certain way to assemble our product. I think that is why we have survived.

We don’t have to go raise $500m to build a factory. Unlike many other CPV companies that couldn’t scale up because they couldn’t build a factory, there are already a lot of thin film manufacturers that make it for other industries. It’s all on exiting tooling at existing factories and so we give them the formulation and specs for what we need and product is shipped to us on rolls.”

Q: How do you view the general environment toward your products and the solar industry in general?

A: “Two to four years ago the reaction was negative against all CPV companies. There were a lot of companies that financially just didn’t make sense. Now, those of us left have the best performing and lowest cost products, so I think the sentiment toward solar has improved over the last year. Now that we’ve done the Sandia deployment and we are out of the lab, the marketplace can see our technology and we’ve seen a positive response.”