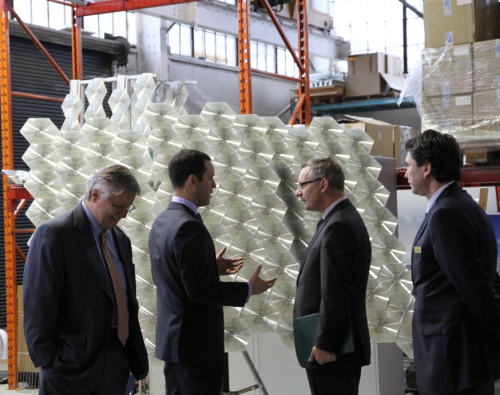 In a press statement EnerTech, a fully owned subsidiary of the National Technology Enterprises Company (NTEC), said the partnership agreement has been signed in Kuwait in a ceremony attended by representatives of the two companies and Canadian Ambassador to Kuwait Douglas George.

Comprising an Exosun tracker holding 18 to 24 Soitec CPV modules, this CX S540 model delivers output per unit reaching up to 61.2 kW. Already being sold by both companies, it will be used in the majority of CPV projects that the French Ministry of Energy selected at the end of the second call to tender for large-scale photovoltaic installations that the French energy regulator, the CRE, issued in March 2013.

Exosun designed and developed dual axis solar trackers using a control system to give excellent tracking precision of 0.1°. Going by the name Exotrak CPV they combine technical and economic performance to exploit the full potential of Soitec's CPV modules. The trackers are said to blend perfectly into the landscape, and are simple, fast and easy to install and maintain.

Exosun and Soitec have been collaborating over the past two years.

Jean-Noël de Charentenay, Exosun's VP of Business Development, comments, "The call to tender relating to ground-mounted photovoltaic installations of more than 250 kWp issued by the French energy regulator were implemented by the French Government in order to build a solar industry in France, in particular by encouraging innovative technologies like CPV with a total volume of at least 60 MW. This partnership with Soitec illustrates the way in which two French industry leaders contribute to forming a strong French photovoltaic sector, delivering high-quality and innovative services."

Jose Beriot, vice president of Solar Projects Development with Soitec's Solar Energy division, concludes, "Through this cooperation with Exosun, we are happy to show that CPV technology is in a position to reinvigorate the industry through innovation, and that it represents a true growth driver."