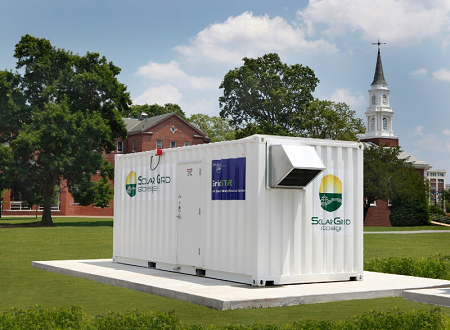 SunEdison’s recent acquisition of Solar Grid Storage, a Pennsylvania-based start-up specializing in packaging lithium-ion batteries and inverters with commercial solar PV projects, threw down a new gauntlet in the fast-changing and highly unpredictable solar-plus-storage market in the United States.

Though the dynamic growth of renewable energy, and particularly rooftop solar, predicates energy storage as the next big move in the solar and wind markets, so far the US solar-plus-storage sector had very few pure-play individual vendors.

Solar Grid Storage’s purchase in March 2015, which followed SunEdison’s acquisition of energy company First Wind for $2.4 billion earlier this year, made the American solar giant the world’s first renewable energy company to offer both solar and wind energy and energy storage services across the value chain - from design, engineering and development to asset management and operations & maintenance. SunEdison now has about 5 GW of solar and wind assets under management around the globe.

What SunEdison’s early forays into storage means for the solar-plus-storage market is still largely unclear. The US market for battery-backed solar PV systems is projected to grow to $1 billion by 2018, according to GTM Research, but it is still too early to say which of the 40-plus contenders in solar storage will manage to come on top.

SunEdison’s business plan
Yet, SunEdison’s near-term goals are pointing to a business plan that aims for diversification and global expansion, as the company intends to complete solar and wind projects with 2,100 to 2,300 MW of capacity in 2015. Overall, SunEdison has an inventory of about 3,300 MW, most of which in 2015 and 2016.

The company is among a growing number of solar system developers that are seeking to sell solar-plus storage in markets that have incentive programs and attractive revenue opportunities.

“There’s a tremendous opportunity both in storage itself but also its ability to clear the path for a large-scale penetration of renewables in the grid,” said Thomas Leyden, vice president for energy storage deployment at SunEdison.

The purchase of Solar Grid Storage gives SunEdison a head start in the ancillary services and solar-plus-storage markets, a project development team, new operating assets and a roughly 100 MW pipeline of prospects of importance to the company, Leyden said.

The deal gave Solar Grid Storage, which had built its business model around providing lucrative frequency regulation services in the PJM Interconnection market, access to additional capital and more attractive financing, which Leyden says is the key to reducing the barriers to battery-based grid storage projects.

New revenue streams that could be monetized for projects allow energy storage developers to offer better power purchase agreements to the end customer as the extra costs of installing storage systems are covered by the additional revenue.

Key to SunEdison’s business plan for entering the renewable-plus-storage market is to fold its solar-plus and wind-plus storage projects into the company’s YieldCo subsidiary, TerraForm Power, as well as the new YieldCo, TerraForm Global, which is expected to launch in Q2 2015 and will focus on emerging markets, particularly Asia, Leyden said.

“The advent of the YieldCo is a big deal because it is a financial vehicle that has not been available to us,” he added. “It’s the first time that an integrated solar company actually wants to own the asset rather than selling them off to a bank. That’s a big sea change in the solar industry.”

The YieldCo will allow SunEdison to retain more ownership on its balance sheet to participate long term in project benefits and to lower the cost of capital for the projects it is developing, which should increase the number of projects that make it across the finish line and accelerate the company’s growth rate.

At the time of the purchase, Solar Grid Storage had four energy storage projects totalling 1.2 MW in PJM Interconnection’s territory and recently installed a 500 KW system at a New Jersey public school.

SunEdison also expects to deploy a 1 MW system in New Jersey this summer plus additional 2 MW of capacity in Pennsylvania, for a total of 3.5 MW of new storage installations in 2015, Leyden said.

Though Solar Grid Storage has focused on solar-plus storage, SunEdison is looking into renewables-plus storage -- and even storage-only when it makes sense, according to Leyden.

The company plans to initially focus on two key markets – PJM Interconnection and California – which have the financial incentives and procurement mandates to drive more capacity – but its ultimate goal is to expand nationwide and ultimately globally.

SunEdison is also looking for opportunities in several other US states where utilities are starting to put out RFPs for fairly large-scale in-front-of-the-meter storage projects that will come on stream in late 2016 or early 2017.

“For all intents and purposes, 2015 is all about ramping up the PJM and California markets so that we could scale those, and then opportunistically looking in other areas in the country where we can deploy our solar-plus storage projects,” Leyden said.

The company’s short-term strategy is to focus on lithium-ion battery technologies for its US operations, but its recent announcement that it will purchase up to 1,000 flow batteries from Imergy Power Systems for rural electrification systems in India suggests it is looking across the board.

SunEdison will continue to focus on Solar Grid Storage’s traditional 150KW-10MW systems for its PJM market operations but could expand its system size in larger markets such as California, Leyden added.

New business models emerging
Though the solar-plus storage market has developed ad hoc, several emerging business models can already be identified. The early deals are pointing to a disruptive shift in the energy market, with new business strategies combining solar power, smart devices, energy storage, energy management technologies and electric vehicles in one form or another.

Following up on SunEdison’s acquisition of Solar Grid Storage, the market could see more solar developers acquire storage companies, particularly in the commercial/industrial and residential sectors.

“The historic trend of solar will repeat itself in storage, where the larger storage projects lead the way and then eventually companies find ways to cost-effectively incorporate storage into residential systems in some attractive way,” Leyden said.

Four of the top 10 US residential installers now offer energy storage, according to GTM Research.

Meanwhile, rather than becoming energy storage providers themselves, some vertically integrated PV manufacturers like First Solar say they prefer to pair with storage-only companies and technologies to offer a more attractive solution to developers.

Similarly, SunPower and storage startup Sunverge announced in December 2014 that they had formed an exclusive agreement to make an integrated solar-battery system broadly commercially available for residential customers and utilities in the US in 2015.

Electric vehicle battery vendors CODA, BYD and Tesla, among others, have also targeted solar-plus storage for diversification or entrance of the stationary energy storage market.

Tesla Motors has a relationship with SolarCity to develop battery storage coupled with solar, which, according to consultancy McKinsey, could significantly reduce the cost of solar energy and its storage.

Storage system integrators such as Stem and Green Charge Networks are also among the latest crop vendors that have focused on system integration and battery management systems as a means to compete in the market.

The solar-plus storage model of the future may still be coming, but the trends that will likely define it are already here. The large number of business strategies in this space suggest that the solutions within the storage space are all the way from large utilities down to small commercial and even residential companies.