Future success of Southern California Edison’s (SCE) Preferred Resources Pilot (PRP) to deploy a fleet of clean, distributed energy resources to offset load growth in Orange County, Calif. may signal the solutions that other utilities and developers can use to replace the need to procure new fossil-fuel-fired generation in other densely populated areas, experts told Energy Storage Update. 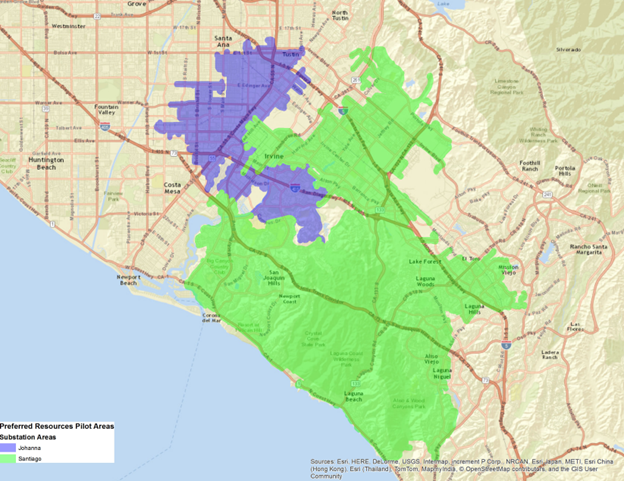 On September 8, the California investor-owned utility contracted 125 MW of power from six developers – comprising demand response, battery storage and solar-plus-storage – to test whether distributed energy resources can offset up to 300 MW of increasing customer demand expected in Orange County by 2022

The contracts are part of a groundbreaking attempt by the utility to deploy a combination of solar, wind, battery storage, energy efficiency and energy conservation to supply the additional electrical needs to the region with the same reliability as a traditional power plant.

The pilot is taking place in an area that is home to about 250,000 residential customers and 30,000 businesses, has an expected load growth of about 3% per year out past 2022 and was also impacted by the recent retirement of the San Onofre nuclear plant.

The contracts were awarded based on a lowest-cost best-fit approach, said Caroline McAndrews, director, Preferred Resources Pilot Project at SCE (see table below).

The resources are expected to come online between 2019 and 2020 and will add to the 136 MW of “preferred” clean energy resources that have already been acquired for the pilot.
Storage revenues

Though the procured resources are not expected to become operational until a few years from now, the PRP is already providing early lessons about expected costs, emerging technologies and market design.

The awarded contracts range between 10 and 20 years in length, a comfortable time window that reduces risk, making the projects far more attractive for investors, while also lowering intrinsic financing and nominal costs.

“The longer-term contracts represent the thinking that these assets are truly meant to either be long-term deferrals or totally eliminate the need to do more traditional upgrades because the utilities’ planning horizons have always been long term,” said Chris Streeter, chief information officer of energy storage asset developer Convergent Energy + Power, which bagged the second biggest contract.

The company has contracted to deliver a 35 MW, 140 MWh lithium-ion system (over three projects) to provide targeted electric capacity and other benefits to the California grid.

Convergent will provide up to four hours of continuous discharge capability for peak shaving and grid balancing services in southern Orange County. The project is scheduled to come online on December 1, 2019.

As part of the contract, Convergent will also be required to bid into the energy market every day, which could allow the company to monetize additional revenue streams, such as energy arbitrage, if price spreads in the wholesale market are big enough to justify it.

Streeter said Convergent could also bid the battery storage asset into other markets, such as the regulation market, the spin or non-spin reserve or try to access other ancillary services, if they present profitable revenue opportunities.

Streeter did not disclose the value of the deal but said that battery costs around the time when the project is expected to get built could be as low as $1 million/MW, given current industry trends.

The company has not picked a battery supplier yet.

On the utility side, McAndrews said one of the key lessons learned from the project so far is that SCE needs to procure resources that can support both the system need and the local circuit needs, which are often different.

Contracted resources are expected to serve both the two “A” level 220kV/66kV substations – Johanna and Santiago – in the PRP, where peaks occur around 2 p.m., and the local circuit load, which in specific areas could peak around 6 p.m.

As part of the pilot, SCE has also shifted to hourly planning at the distribution level, which has allowed it to change how it develops its resource portfolio, uses customer meter data, procures based on hourly attributes and measures its grid-level resources.

According to McAndrews, this approach is also helping SCE better communicate to developers the broad needs of what it is trying to accomplish and give them the freedom to design innovative products rather than have them simply adjust their offerings to a very narrow set of requirements.

“If we want to value or judge the best distributed energy resource, what we want to do is identify attributes and then have developers design products that can fill that gap, that attribute need,” she said.

SCE’s new approach begins with traditional distribution planning calculating the annual peak at a substation and then forecasts a location-specific, bottom-up, 24-7, 365-day load shape that defines the peak demand attributes that may be met by distributed energy resources.

Attributes are defined by the MW needs: how much, how many hours, how often per year and what time of day.

In-front-of-the-meter energy storage, for example, will be measured by analyzing the generation meter data once the asset is deployed, while behind-the-meter solar and energy storage hybrid projects will be assessed based on their ability to provide a firm block of energy – and the power drop – over a six-hour period.

The data and insights from the pilot is also available to SCE’s grid planners, who are evaluating locations for the where deployment of DERs may displace or defer network investments, under the state’s Distributed Resources Plan proceeding.