Siemens is developing a thermal energy storage system for renewable energy integration that could deliver some of the cheapest solution in the high-power, high-capacity and long-duration energy storage range. 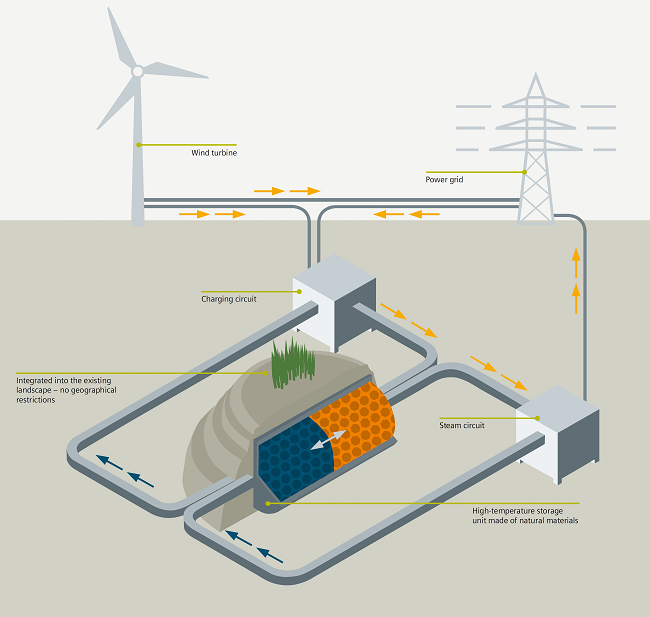 The system is aimed to store energy “significantly below” €0.10/KWh in large-scale deployment, depending on the exact nature of the storage application or services involved, Till Barmeier, program manager for the project at Siemens, told Energy Storage Update.

The system combines established steam turbine technology with packed-bed heat storage. After having been converted to heat in rock fill, excess wind energy is stored and protected with an insulated cover. When there is a need for additional electricity, a steam turbine converts the heat energy back to electricity.

Although the concept could in theory use electricity from any source and is designed as a stand-alone grid solution, the system is well suited to take advantage of excess wind power.

The company is researching how to make charging and discharging more efficient.

The current set-up is only testing the thermal requirements for the storage process, but Siemens plans to start testing the complete energy conversion – from electricity to heat storage in the rock fill and back to electricity – in spring 2018.

Next year, the company will start a 5 MW, 36 MWh demonstration project, using a Siemens steam turbine that can generate output of up to 1.5 MW of electricity for up to 24 hours a day, on an old aluminum smelter site in the Altenwerder container terminal quarter of Hamburg.

Construction of the demonstration plant is scheduled for spring 2017.

While Siemens expects to generate efficiency of around 25% in the early development phase, the concept has the potential for a 50% efficiency at larger scales, according to Barmeier.

Siemens is planning to develop a commercial pilot project of 30-40 MW in 2019 while later full-scale commercial projects would likely have a capacity of 100 MW and above.

The demonstration project could be targeting applications like balancing power or price arbitrage, though the major long-term goal is to supply electricity in times of low wind and low solar, Barmeier said.

In theory, discharge of the stored electricity can provide many types of ancillary services, including voltage and frequency regulation, as well as spinning reserve.

Barmeier said that the main cost advantage of FES is that it is based on tested and mature technologies. Costs can be cut further by improving the storage system itself since the other components are all based on proven technology.

The system is also well suited to re-use and re-cycle retired infrastructure, such as steam turbines at old combined-cycle or coal-fired power plants, to lower investment.

However, thermal storage has higher energy density and a significantly smaller footprint than CAES and pumped hydro.

Though lithium-ion batteries are better suited for short-to-medium storage durations, according to Henrik Stiesdal, wind power pioneer and former CTO of Siemens Windpower, high-temperature thermal energy storage is much cheaper than lithium-ion at storage duration beyond a few hours.

FES could also be considerably cheaper than many of the thermal storage solutions currently in the market.

These costs assume the near-ideal case for energy storage, where it is used intensively, which maximizes the energy produced over its lifetime. Application is critical for the calculation of LCOS. In other applications, the relative costs of the competing technologies are likely to be different.

For example, storage used to smooth out wind fluctuations is likely to spend a significant part of its life either empty - waiting for wind - or full during sustained high wind output.

As rising renewable energy penetration drives up the need for long-duration storage in the long run, thermal storage could also be among the most competitive options to provide seasonal storage – over weeks and months – to allow the de-carbonization of electricity and heating, Gardner said.

"The competition against thermal storage for that seasonal type of storage is instead power to gas, pumped-hydro storage and compressed air storage," he said.