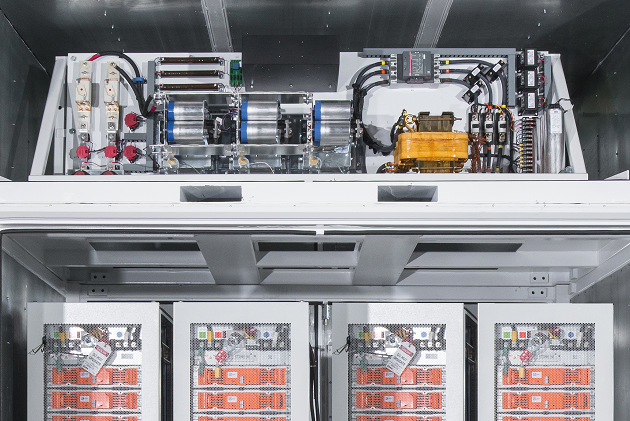 Germany’s lawmakers are said to be pondering the move as part of an energy reform due by the end of this year, which will overhaul Germany’s electricity market, including the design of the balancing power market.

The fast response qualities of battery storage solutions mean that the key changes expected on slower balancing measures will have a greater impact on power generation solutions rather than the growing storage sector.

“There will be a change in regulation and it’s actually a crucial one,” said Tobias Rothacher, senior manager for energy storage and fuel cells, solar energy and bio-energy at Germany Trade & Invest, the country’s economic development agency.

Among the changes is a proposal to open the market for balancing power to more suppliers, such as renewable energy providers, storage facilities, emergency power generators and virtual power plants, in order to facilitate the use of flexibility options, according to a July 2015 government whitepaper outlining the main provisions of the reform.

The balancing power market is currently open to any coal, nuclear, gas and pumped hydro plants that allow their systems to be switched on and off automatically by one of Germany’s four main transmission system operators.

“It would be a really low-hanging fruit, from a society perspective, to use [wind and solar plants] as balancing powers,” Rothacher said. “If we had too much wind, why should we build a battery if we can just switch wind off?”

Such a scenario is being taken seriously, said Rothacher, because of its potential for reducing grid-balancing costs through the use of low-cost renewable generation. He predicts that PV and wind systems will participate in the market.

Balancing power
On paper, this could mean Germany’s balancing power market would be flooded with new participants. That in turn might reduce the value of balancing services to the point where batteries cannot compete, hampering growth in Germany’s emerging grid-scale energy storage market.

Philip Hiersemenzel, spokesman and consultant at the German battery storage and grid solutions provider Younicos, does not think the new legislation will hinder batteries because the changes only apply to secondary and tertiary control, which is not a big area for battery storage.

“Yes, markets are being opened to renewables,” he said, “but not primary frequency control, because they simply can't comply with the requirements.”

Fast-responding frequency regulation sources such as batteries are especially suited to providing primary control power, which must be adjustable within 30 seconds of a system deviation.

Hiersemenzel said the German government is expected to ask Germany’s regulator, the Bundesnetzagentur, to start a process to redraft the product design of the markets for frequency regulation.

“We can expect within the next year to see smaller, shorter-running products in these markets, which will be auctioned in a shorter timeframe,” he said.

For primary frequency control, which is the main market for grid-scale battery plants in Germany today, no changes are expected in the short or mid-term.

“In early papers, the German government mentioned an interest in changing the product design here as well,” Hiersemenzel said, but “this seems to be off the table for now.”

On the contrary, the government’s whitepaper on the changes highlights that battery plants could have an important role in grid balancing and help optimize local grids in the future.

This will be achieved through pricing signals rather than support mechanisms, but “the current legislative process very clearly sees a strong role for batteries in the future energy system,” Hiersemenzel said.

Currently, the German energy storage market is not regulated. There is no general funding or subsidies in the country for large power plants, either, according to Stefan Müller, chief operating officer of the solar and storage developer Enerparc.

This means grid-scale energy storage plants have to be able to stand on their own merits.

Providing primary grid balancing services is one area where the technology is competitive, but in general “it is difficult to measure the commercial benefit,” Müller said.

The installed battery capacity for primary control provision in Germany has increased from about 1 MW in 2012 to roughly 27 MW in 2015, and will keep on rising, according to Germany Trade & Invest projections.

Rise in home storage
The situation is somewhat different in the residential energy storage market. Here, too, there is no specific regulation, but incentives exist.

In particular, homeowners can buy battery systems with a loan from KfW, the German government-owned development bank, and benefit from a subsidy that amounts to up to 30% of the cost.

About 50% of residential battery customers in Germany have taken advantage of the offer, Rothacher said. This has helped boost the residential market from almost zero installations two years ago to around 1,000 a month at present. By the end of the year, up to 13,000 residential battery systems are predicted to be installed across Germany.

The KfW loans are “linked to demanding technical requirements,” according to KfW. “This ensures that funding is only provided for high-quality products.”

In addition, the systems must be set to reduce pressure on the transmission infrastructure so that peak production from a PV installation is not fed into the grid at midday but is instead stored in batteries for later use. A maximum of 60% of PV output is allowed to be fed directly onto the grid.

These setups typically mean that between 60% and 80% of participating customers’ supply is independent of grid supply, according to Rothacher.

Even so, he said, residential battery storage is “not really economical right now” and is largely “emotionally driven.”

Even with KfW subsidies, the payback time for a typical battery system in Germany is around 14 years, which may be longer than the lifespan of the batteries.

“These people have money. But we are seeing a shift from an emotion-driven, idealistic customer segment to a mass market,” Rothacher said.