A number of German companies are aggregating distributed energy storage assets through platforms that provide grid services to the renewables-rich country. 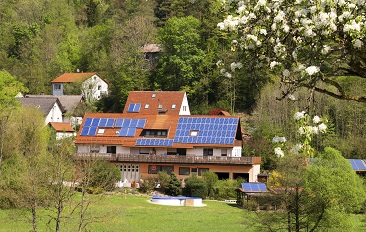 Projects underway in Germany, where wind and solar power capacity has risen to around 80 GW, will show the potential for aggregating services elsewhere in the world.

Companies such as LichtBlick, Caterva, Fenecon, Senec-IES and Next Kraftwerke are providing software and hardware to create ‘virtual power plants’ using aggregated assets. LichtBlick claims to have the most proven technology platform so far.

LichtBlick’s marketing slogan is ‘a power station the size of Germany,’ and in 2014 the firm grew to 400 employees and generated a turnover of $789 million based on providing solar-plus-storage and energy trading systems to consumers.

In 2015, the company began aggregating distributed power sources to build a virtual plant.

Asset pools
The first Transmission System Operator (TSO) services to be offered via this concept (primarily around frequency response) are based on a pool of Combined Heat and Power (CHP) units, according to LichtBlick’s website.

“The aggregators which operate these small units in a swarm or virtual power plant are selling the aggregated capacity as a ‘control reserve’ to TSOs,” said Tobias Rothacher, senior manager for energy, environment and resources at Germany Trade and Invest (GTAI).

As of June 2015, LichtBlick’s virtual plant was made up of 1,000 decentralized CHP units, rated between 20 kW and 1.5 MW. However, the company is also intending to integrate residential energy storage into the concept.

According to BSW, the German Solar Association, more than 15,000 German households were using solar power systems with storage by the end of 2014, giving them greater independence from rising electricity prices, which are largely driven by Germany’s shift from nuclear to renewable power.

Digital power
“LichtBlick already operates a digital power plant in Germany,” said the company in a press release announcing a tie-up with Tesla in May 2015.

“Once linked to the cluster, Tesla Powerwall will be able to draw excess wind and solar power from the electricity network and then, during calm or cloudy periods, use this electricity in buildings or feed it back into the network.

“Consumers who integrate their batteries into the cluster will benefit from energy market revenues through LichtBlick.”

The company has already recruited more than a million ‘LichtBlickers,’ or householders that give LichtBlick access to their battery storage assets through their proprietary IT system called SchwarmDirigent.

The IT platform is web-based, and “there is no limit how many local systems could be networked,” Anke Blacha, of LichtBlick’s corporate communications team, said.

Early development
LichtBlick has announced plans to expand, in partnership with Tesla, to other European countries and to the US, Australia and New Zealand. But some observers point out that the virtual power plant concept, while attractive on paper, has yet to really prove itself in practice.

“We think it’s quite early days in terms of making a meaningful contribution to grid services because the total number of commissioned megawatts that could be aggregated remains low,” said Logan Goldie-Scot, head of energy storage analysis at Bloomberg New Energy Finance.

One concern is whether the aggregators can pull together enough assets to really deliver services such as frequency regulation at grid scale.

This is particularly the case where consumer systems are involved, since presumably homeowners will want to put limits on how much their batteries are used by an aggregator.

Another issue is what impact aggregated service provision might have on household battery systems. Companies such as Tesla are selling battery packs that are designed to perform a charge cycle around once a day.

“A lot of batteries are designed to do 4,000 or 5,000 cycles, which would last about 10 years,” one battery company insider told Energy Storage Update. “If you are doing three or four cycles a day, the customer won’t be happy in five years time when they have to change the battery.”

Battery wear and tear also adds another challenge for aggregators: how to make sure LichtBlickers and other asset owners are properly rewarded for their participation in the scheme.

Frequency regulation, for example, is undoubtedly a valuable grid service, but it is unclear whether the amount TSOs are willing to pay for it will be enough to compensate homeowners for the costs of replacing batteries more often.

Taking the load
Some experts question the extent to which utilities will favor virtual power plants over real ones if they cannot pass the cost onto ratepayers.

It appears the energy aggregators are trying to address some of these issues, for example by specifying or supplying the most appropriate types of battery to the asset owners.

It is also hoped that the growing use of smart aggregation systems such as SchwarmDirigent will help optimize battery management so that the impact on performance is minimal. For now at least, observers are upbeat about the prospects.

“We believe many more manufacturers will also start offering this,” said Rothacher of GTAI. “It is a clear trend in the industry.”