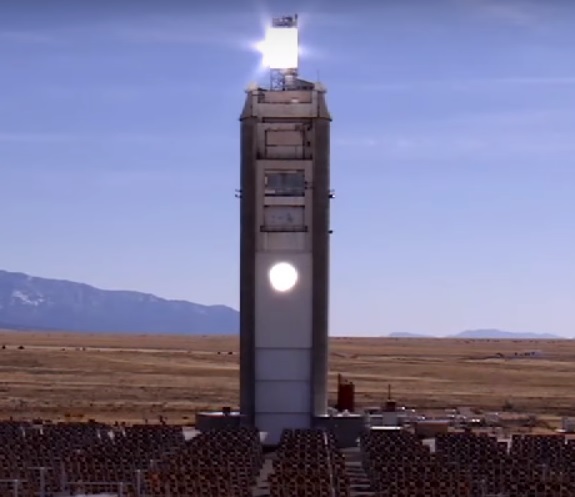 High-temperature designs are set to lower the cost of CSP with storage. (Image credit: DOE)

The U.S. Department of Energy (DOE) has allocated $12 million of federal funding to 15 projects that will research high-temperature CSP components and systems, the DOE announced October 23.

"These projects will develop materials and designs for collectors, power cycles, and thermal transport systems that can withstand temperatures greater than 700 degrees Celsius (C) while being corrosion-resistant," the DOE said in a statement. 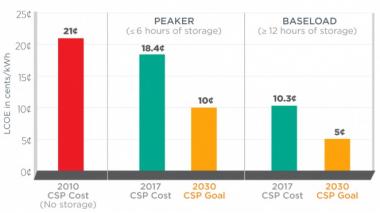 In U.S. and Europe, CSP developers are pursuing new high-temperature designs which should lower the cost of CSP storage and open up new market opportunities.

The DOE's Gen3 CSP program, launched in May, will see Brayton Energy, the National Renewable Energy Laboratory (NREL) and Sandia Laboratories compete for a $25 million grant to build an integrated high-temperature system demonstrator.

The three companies will develop and test their cost-effective CSP plus storage designs, which heat transfer fluids (HTFs) to over 700 degrees C. They will each complete a design detail for a test demonstrator facility and can incorporate, if required, learnings from parallel component-level research.

The demonstrator plant is a key step towards the commercial deployment of high-temperature CSP technology. The facility is scheduled to commence operations in mid-2020 and operate until around 2023.

Spanish power group Iberdrola has agreed to sell its 90% share of the 50 MW Ibersol plant in Spain to Ence Energia at a price of 72.3 million euros ($82.3 million), Iberdrola announced October 18.

Ence is Spain's leading biomass power generator with an installed capacity of around 220 MW.

Iberdrola will also transfer to Ence 108.8 million euros of remaining loans made to Ibersol.

Spain was a trailblazer in CSP technology and currently hosts over 2 GW of installed CSP capacity. All of Spain's installed capacity was commissioned between 2008 and 2013, before activity was halted by the removal of state subsidies. Spanish companies continue to develop CSP technology and play a major role in international projects. Strong solar resources, good availability of large flat land area and domestic CSP expertise could support a reawakening of the Spanish CSP market in the coming years, according to market participants.

Completion of the Ibersol transaction will require the Instituto para la Diversificacion y Ahorro de la Energia (IDAE), holder of the remaining 10% of Ibersol share capital, to waiver its right of first refusal for Iberdrola's shares.