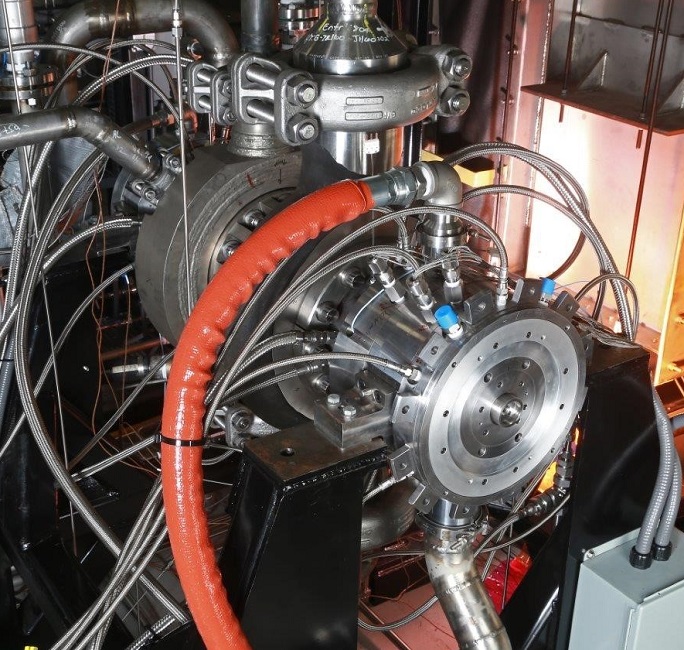 The 10 MW turbine is the "size of a desk" and has yielded the highest power density for an industrial turbine, SWRI said.

“Most conventional CSP systems operate at a thermal efficiency of 35 to 40%. The newly designed turbine with the sCO2 power cycle can approach a 50% efficiency,” Jeffrey Moore, principal investigator for the project, said.

The turbine can withstand the tough operating conditions of CSP plants and is scalable to as much as 450 MW, SWRI said.

“This will not only improve [CSP] plant efficiency but also improve the efficiency of fossil and nuclear power plants, as well as lower the cost of waste heat recovery and energy storage,” it said.

The researchers will incorporate a variation of the turbine into the Supercritical Transformational Electric Power (STEP) 10 MW demonstration plant, a sCO2 pilot plant currently under construction at SwRI’s headquarters in San Antonio. The $119 million STEP program aims to demonstrate a fully-integrated sCO2 power plant can generate power at higher efficiency and lower cost and produce less carbon emissions, than conventional plants.

SolarReserve to sell Aurora CSP after failing to secure finance

SolarReserve is to sell its 150 MW Aurora CSP project near Port Augusta in South Australia after failing to secure financing for the project, the government of South Australia said in a statement April 5.

The AU$650-million ($465-million) Aurora project was based on SolarReserve’s CSP tower technology and include eight hours of molten salt storage.

In 2017, South Australia awarded U.S. developer SolarReserve a 20-year power offtake agreement for the project at a maximum price of AU$78/MWh. Last year, SolarReserve signed a Memorandum of Understanding with Australian firm Heliostat SA for the supply and assembly of heliostats.

"Yesterday, I received a response which confirmed how SolarReserve proposes to sell the project to a third party who may take the project or an alternative project forward at the site," Dan van Holst Pellekaan MP, said April 5.

"The State Government will immediately begin the process of returning to market to secure its future electricity needs," Van Holst Pellekaan said.

Any purchaser of the project would be able to tender for a new contract, the MP said.

The project was being developed with the option to add PV technology to provide power during the day and maximize CSP electricity generation during evening peak demand periods.

The South Australia government had already extended the financing deadline for the project and worked hard to provide assistance to the project, identifying engineering, procurement and construction (EPC) groups and introducing the developer to potential investors, Van Holst Pellekaan said.

The Megalim plant is located in Israel’s Negev desert and features a 250-metre tower. GE was responsible for engineering, procurement and construction (EPC) and BrightSource supplied the solar field technology.

The solar receiver steam generator weighs 2,200 metric tons and was lifted on top of the 250 m tower in 2017 in a first of a kind procedure which took around two weeks.

The Israeli government awarded the project back in 2012 and forms part of Israel's goal to source 10% of its electricity from renewable energy by 2020.