The trouble with dish Stirling CSP

With high efficiency and a modular design, there are good reasons why CSP developers might want to succeed with dish Stirling. It does not seem to be an easy ride, though. 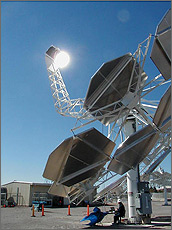 It is probably fair to say solar thermal dish Stirling technology had its finest moment around October 2010.

That was when the US Department of the Interior cleared Stirling Energy Systems (SES) and its development partner Tessera Solar to build two major plants using the technology.

The Imperial Valley Solar and Calico projects would have summed almost 1.6GW of power, well and truly putting dish Stirling on the map.

However, as almost anyone in the solar business knows, the places on the map where the projects were supposed to have been are still undeveloped. And the only plants ever likely to be built there will be based on PV.

As previously reported in CSP Today, there are lingering concerns over the extent to which Tessera and SES’s choice of technology may have played a part in the companies’ downfalls.

And it is slightly suspicious that no other developer has been able to commercialise the concept on a major scale since. Why is this? After all, dish Stirling seems to offer plenty of potential.

First of all, it has the highest efficiency of any form of CSP, converting up to 32% of incoming solar power to electricity, compared to around 15% or 16% for power tower or parabolic trough designs.

That is more than other CSP technologies could ever hope to achieve, says Dr Eduardo Zarza Moya of the Spanish Centre for Energy, Environmental and Technology Investigation (Centro de Investigaciones Energéticas, Medioambientales y Tecnológicas or CIEMAT in Spanish).

With other types of CSP, the head of CIEMAT’s solar concentration systems division believes: “The efficiency will improve, but I don’t think it get more than above 22% to 25%.”

Another advantage of dish Stirling technology is that because it has a turbine on each concentrator it is a highly modular design. You do not have to install and pay for an entire solar field before you see a return on your investment.

In this sense, dish Stirling is akin to PV, in that the energy and financial returns ramp up as you build out a plant. The modular design also makes dish Stirling potentially suited to off-grid or highly distributed power generation.

Unfortunately, however, these benefits are tempered by some significant drawbacks. Because dish Stirling engines produce electricity directly, the technology does not require a heat sink and so lacks the energy storage capabilities of other CSP designs.

Without storage, dish Stirling essentially delivers power in the same way as PV. And PV, right now, is considerably cheaper. Just as importantly, too, PV is a more established and reliable technology.

With dish Stirling, claims one solar analyst consulted by CSP Today: “Structurally, there are engineering issues in supporting the dishes and having good tracking. From an engineering point of view there are some challenges to work around.”

Zarza thinks these problems can be overcome through greater research into more durable materials to replace the steel currently used for Stirling engine casings and parts.

“Infinia thought it had solved the problem with its floating piston design, but that didn’t solve the problem,” he asserts.

Infinia nevertheless remains one of a select group of technology developers stubbornly determined to bring dish Stirling to market, no matter what the challenges. Last month the company broke ground on a 1.5MW project in Utah, USA, which will use its PowerDish systems.

Meanwhile, Ripasso Energy, a solar technology provider based in Malmo, Sweden, says it is targeting the South African market in a partnership with a developer called GHG Reductions.

Elsewhere, however, Wizard Power of Australia appears to have shunned Stirling engines in favour of a steam-based central Rankine-cycle power block for its flagship dish project, the 40MWe Whyalla Solar Oasis, which will use 500 m2 ‘Big Dish’ concentrating solar collectors.

The dearth of major projects so far is frustrating for observers willing to believe in the potential of dish Stirling. One analyst says it is difficult to evaluate the technology. “There’s not many data points from which to work off and engage opinion,” he comments.

Josefin Berg, IHS Emerging Energy Research solar power advisory analyst, adds: “The potential depends on who you talk to. I have heard that some think Stirling is going to have a revival; but they are mainly the same people who are producers of Stirling.”

To respond to this article, please write to Jason Deign