Having proven the solar island concept in the UAE in 2009, Zurich-based Novaton, which acquired the intellectual property of Nolaris in February, is now taking the patented concept worldwide. 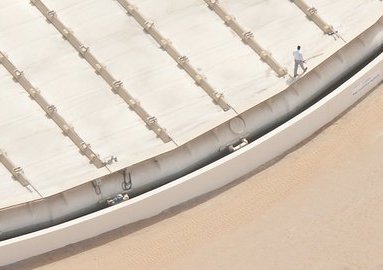 The technology promises a zero-shadowing effect and at least 30% less land space than typically required for CSP plants. But how can it be applied to CSP? CSP Today investigates.

Circular, floating on a cushion of air and without heavy mechanical constructions needed to support it, Novaton’s solar islands promise a lower cost solution than other concentrated technologies and a higher energy output, the Swiss company claims.

With a dimension typically ranging from 20 to 100 meters in diameter and a low profile of about 2 meters maximum to reduce exposure to the wind, the island consists of an outer torus and a membrane, on which the solar receivers are placed with longitudinal cables to hold them aligned in position.

Below the membrane, a small overpressure of typically less than 1% of the atmospheric pressure is applied (still representing 100 kg/m2), carrying the load of the solar receivers and allowing the solar island to rotate and align its receivers to the sun, via azimuth tracking. This element is crucial for concentrated solar or CPV receivers, which have to be constantly and precisely aligned with the sun’s perpetual movement.

“The concept is that a thin flexible airtight membrane, with overpressure of air under it, can carry huge loads. It’s similar to the big inflated air mattresses at the fairground. The membrane is very thin, so it’s like a floating mattress that can support your weight. The overpressure under the membrane of the solar island can support huge distributed loads, for example 130 tons of solar receivers (parabolas) for a 100 m diameter Solar Island. This is a very cost-effective way to align very large numbers of solar receivers in the direction of the sun”, Thierry Meresse, CEO and co-owner of Novaton, tells CSP Today.

Most importantly, the layout eliminates the need for equipping each concentrating solar receiver with individual and expensive tracking systems. There would also be no need to move each row of solar receivers individually and no need for large spacing between the receivers because of the shadowing effect. All of this equates to a higher density of solar receivers, generating a higher output in energy, be it hot steam, hot steam and electricity, or simply electricity.

“If you use the solar island technology which follows the azimuth of the sun, you get a horizontal rotation and no shadowing effect. No one has done this before, because it wasn’t possible before without the Solar Island – only this technology enables many receivers to move at the same time with almost no friction. What makes the concept very effective is that we use much less space – at least 30% less – than the other technologies for the same amount of energy generated, and this at a competitive cost”, Thierry explains.

The solar island can be installed on land, water or rooftops. The marine version is designed to be installed on calm waters, based on the same principle of the land version. “The solar island can also be on water – but on a retention lake, not in the middle of the ocean where you have big waves. Greece for example where there are many protected areas, would be an ideal place for the marine version of the floating solar islands”, explains Thierry.

As with all CSP technologies, the solar islands work best in sunny regions with a high proportion of direct irradiation. “Ideal places for the solar islands are where you have a lot of direct irradiance, such as the Middle East, Australia, Colorado in the U.S., India, Chile, North and South Africa, where almost all the irradiance is direct and you don’t have much diffuse irradiance – this is what you need with CSP and CPV”, Thierry comments.

Many of today’s CSP technologies require a large land area to reduce shadowing – an effect that is never totally eliminated. Indeed, solar energy efficiency can be measured by the quantity of energy produced per square meter of land, and adding more land leads to more construction and cabling costs.

For example, the elevation tracking of solar troughs, and two-axis sun tracking of solar towers and dishes, all lead to great losses in land area and lower the energy production per sqm of land area. “Even if solar is by far the most abundant renewable energy on earth, it is unfortunately a very diffuse energy. You don’t want to aggravate this issue by not getting all the energy you could capture per land area”, says Thierry.

“If you look at the other concentrating solar technologies, each parabola/receiver has its own separate system. For the solar island, we have only one electronic sun tracking system; the whole solar island and all receivers rotate together”, he adds.

Sun azimuth tracking, which the solar islands use, is the answer to these key challenges, claims Novaton, since azimuth tracking achieves up to 80% efficiency and 0% of land space is lost, because the parabolas are placed next to each other. Having no shadowing produces 50% more energy compared to other technologies, from the same space area.

According to Novaton, a square of about 4 km x 4 km covered with solar islands would produce as much energy (heat) as a 1 GWe nuclear power plant working 24 hours a day, with the advantage of producing green renewable energy safely, and without the dismantling cost of nuclear plants.

When it comes to the manufacturing of solar troughs and parabolas, Novaton plans to use some external help, while offering its exclusive technology at the same time. “We want to work with other firms to do this, because there are some extremely good companies in this field, such as Acciona and Abengoa. But we have a patent for our parabola system – which is a very inventive solution. We have 6 patents for the solar island and the parabolic trough system (a folding reflective sheet). By folding a reflective sheet, we can create a perfect parabolic shape. So we can also bring something to these companies – through our patented parabola system.

Because of its non-complex structure, a high level of localization could be achieved in building a solar island. “The principle is roughly like a pizza plate; when you flip it upside down on water, it’s going to float. Our solar island can be constructed in developing parts of Asia and Africa. This is not like high-tech PV panels that need to be manufactured in industrialized countries. Solar islands can be manufactured anywhere.

“Apart from the membrane – which needs to stand 20 years in the sun, and which we have technology for – the sun tracking system can be localized. We have several companies around the world that can manufacture membranes which can stand the sun for 20-25 years – at least for the life expectancy of the solar island”, Thierry stresses.

Some countries can also produce the mirrors, he adds. “Between 60-80% of the solar island, if not more, could be localized, depending on the country. This is a big advantage compared to PV, which only industrialized countries such as China and North America can manufacture.

Using CSP or CPV, a small solar island could be applied to heating and cooling systems, without using electricity. “A 20-50 m diameter solar island could be used for district cooling or heating. This is because with heat you can produce coolness (via a chiller) and in some hot countries, such as the UAE, you have many flat roofs, and you can mount a solar island there on a flat roof or in the garden. The greatest thing is that the more sun you have, the more cold the solar island is going to produce, which is what hot sunny countries need for air conditioning”, Thierry explains.

Desalination with Multiple Effect Distillation (MED) is also well suited for input water temperature of around 150ºC, which is the typical water temperature produced by solar islands with CSP receivers.
“Several big solar islands or clusters of them can drive a desalination plant based on MED. Although it could work with reverse osmosis, the best system would be MED because with that you don’t need electricity; you can directly desalinate with the heat of CSP”, Thierry points out.

In mines, cooling is always needed because of the amount of heat produced, while pumping water is another major problem. “We are currently in discussion with a company in Chile, on multi-purpose solar islands that could provide cooling and perform pumping simultaneously. Chile is a great country for this, especially in the Atacama Desert, where they are lots of mines and much direct irradiance”.

Novaton’s Solar Island prototype in the UAE has operated since 2009 under harsh climatic conditions. In January this year, the company was contracted to build three demonstration floating solar islands on Lake Neuchâtel in Switzerland by August 2013; each with a diameter of 25 meters and carrying 100 PV panels for test purposes and eventually concentrating technologies.

Producing about 150 kWh per year, these islands will be connected to the shore by cables, and energy supplier Viteos will connect them to the grid. After their expected 25-year lifecycle and decommissioning, all parts of the solar islands will be recycled. An added benefit of Solar Islands floating on lakes, retention lakes with dams, or large water tanks, is the reduction of water evaporation, which is a main concern in the world.

“We are looking for projects and investors for development. Our projects are on a very good track. We have a project on the Lake Neuchâtel in Switzerland and we will be starting construction very soon. It’s the first time we have solar islands on water, on a lake – the one we have in the UAE is on the ground”, Thierry concludes.