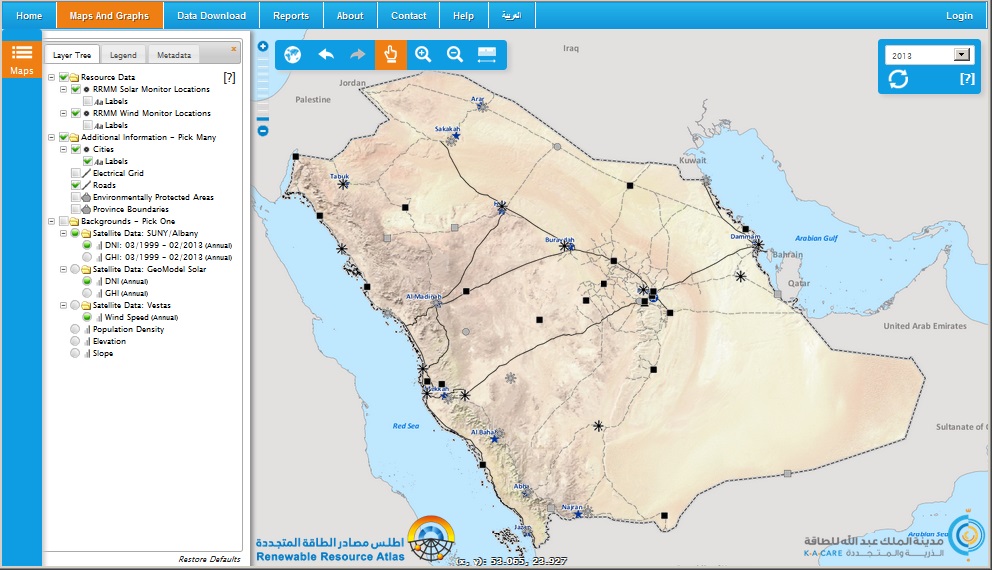 After many months of hard work, the results of Saudi Arabia’s Renewable Resource and Environmental Measurement and Monitoring (RRMM) project are finally available through the Renewable Resource Atlas portal, which is now active on http://rratlas.kacare.gov.sa.

Over the past years, CSP companies with interest in the Saudi solar market had to rely on data gathered mainly through satellite observations rather than on-the-ground stations. In response to this gap, K.A.CARE worked on putting together a comprehensive and accurate renewable resource dataset characterizing the country’s solar radiation and spectrum, wind speeds, humidity, as well as dust and atmospheric conditions.

In addition to the live solar data, the Atlas incorporates dedicated maps for Saudi Arabia’s electrical grid, roads, environmentally protected areas, population densities, elevations and slopes. Although solar resource data collected at the annual, monthly and daily average levels will be accessible by the public, time-series data from hourly down to 1-minute level data will be offered in accordance with Data Sharing Guidelines.
“The K.A.CARE Renewable Resource Atlas is an important step in the development stages for the Saudi Arabia solar industry. This resource will be of the first government-issued reference tools for the implementation of solar projects,” says Browning Rockwell, founder of Saudi Arabia Solar Industry Association.

“While many other components are necessary for solar project development, this is an important link in the development chain. This reference tool will be of equal value to CSP and PV developers,” he adds.

According to K.A.CARE, data from the Atlas can be easily mapped, graphed, and in some cases downloaded for import into other programs that support power plant siting and pre-feasibility studies. This should benefit the entire CSP supply chain, from developers and manufacturers, to investors, financiers and researchers.

As Abengoa highlighted at the launch event, the availability of resource information will be very useful in reducing uncertainties, designing optimal plants, and understanding how energy will be produced.

Indeed, the Atlas will help developers evaluate project sites in the kingdom to determine the best locations, plan operations and maintenance, and even plan outages. For financiers, having accurate data will enable them to make sound financial decisions, as suggested by Deutsche Bank, while for technology developers, the data will help them develop the right technology for the country.

Other solar radiation data for Saudi Arabia exists, such as the ground-monitored data collected by KACST’s 12 stations from 1998 to 2000, the NASA Surface meteorology and Solar Energy (SSE), and the Solar Wind Energy Resource Assessment (SWERA).

However, a 2013 K.A.CARE-sponsored study found that the SSE and the SWERA datasets under-predicted annual values of monthly mean daily total DNI, compared to KACST historical measurements, by about 5% and 20% respectively.

“One of the primary objectives of the solar atlas project is to bridge the gap between restricted number of existing ground measurement sites and regional demand for rapid solar technology deployment by providing reliable and readily available solar irradiance data for future developers and investors,” says Dr. Dr. Hosni Ghedira, Director at Masdar Institute’s Research Centre for Renewable Energy Mapping and Assessment.

Yet, one of the main challenges facing developers during the planning and design of solar plants in the region, according to Dr. Ghedira, is the lack of reliable long-term data.

“Most of the existing models applied in the region typically overestimate solar irradiance, particularly DNI - a key resource for CSP technology. Inaccurate estimation of resource availability may have serious implications on a project’s profitability and economic sustainability”.

“One of the reasons that can be attributed to low accuracy of prediction is the models’ inability to sufficiently account for attenuation of solar irradiance by the frequently predominant airborne dust,” explains Dr. Ghedira, who was one of the speakers at yesterday’s Atlas launch.

In just one year, King Abdullah City for Atomic and Renewable Energy (K.A.CARE) successfully installed 43 solar resource monitoring stations nationwide. But there are more to come, as the overall target is 150 stations, of which 74 stations will be deployed by March 2014.

All data from the network will be quality assured upon collection and before dissemination. It will include solar resource data from two main sources: ground-based monitoring stations, and satellite-based models that have been benchmarked against historical data from the kingdom.

As previously reported by CSP Today, the U.S. National Renewable Energy Laboratory (NREL) and its partner Battelle largely supported K.A.CARE with the distribution of the monitoring stations, helping officials decide where to place the stations. They also helped with the site selection, installation and training of local engineers.

The selected sites for the monitoring stations represent the climatological and geographical diversity of the Kingdom; thus, the stations have been deployed in areas with the highest potential level of solar resources, areas of complex terrain or strong resource gradient, and areas near the electric grid and load centers.

Many of the sites are at universities, technical colleges, Saline Water Conversion facilities and other K.A.CARE partner sites, and Atlas users can filter the live solar data according to the desired site.

K.A.CARE notes that the integration of the solar monitoring network data with satellite-based models will follow the network’s deployment – possibly being available in 2014 – and data from each newly installed station will be released about one month after its operation.

“It’s going to take time for this Atlas to evolve, it’s not going to be a static piece of work, so as it evolves and grows and the data become richer, it will contribute towards the bankability of projects in the country,” says Reda El Chaar, managing director of Dubai-based Access Advisory.

Over the coming years, the data will also support a host of modelling and forecasting programs. For example, solar monitoring network data will be used to improve satellite-based models to better account for dust effects – an area of uncertainty in satellite-based estimates for the region.

The renewable resource atlas will not only include solar resources data, but also will incorporate wind, geothermal heat and waste-to-energy datasets when the entire network is complete.