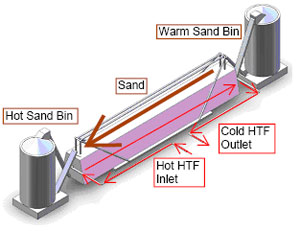 The main technological, operational and cost advantages of using sand for energy storage in CSP systems lie in the fact that it enables developers to achieve high working temperature at low cost - combined with the fact that sand is also 'easily move

During September of 2013, a team of researchers based at the Masdar Institute of Science and Technology in the United Arab Emirates (UAE) launched a new project called SANDSTOCK - which aims to develop a 'sustainable and low-cost' gravity-fed solar receiver and storage system, using sand particles as the heat collector, heat transfer and thermal energy storage media.

The design concept, which is inspired by a traditional sand hourglass, features a 'cold tank,' where sand is initially stored - before flowing into a 'hot tank,' located directly underneath. The cold tank will take the form of a hollow cylinder, designed to allow the concentrated solar flux to penetrate an empty central cylinder part.

By opening a valve the sand will then exit the cold tank and flow through the beamed down solar flux, where it will be heated up. The heated sand will then be recovered and stored in the hot tank - ready to be discharged on demand.

When required, a three step heat exchanger – consisting of a pre-heater, evaporator and super-heater – will then be immersed in the moving sand, producing superheated steam that flows to the turbine to generate electricity.

The discharged cold sand will then be transferred back to the top of the cold tank using a mechanical conveyer – creating a 'closed loop' continuous process.

"We want to develop a new sustainable approach which consists of using local materials instead of importing thousand tons of nitrates from Chile," says Dr. Nicolas Calvet, Assistant Professor and Thermal Energy Storage Group Leader at the Masdar Institute of Science & Technology.

"Sand is available everywhere in the United Arab Emirates. Sand is cheap and sand is stable at high temperatures [of up to] 800oC," he adds.

As Calvet explains, the first stage of the project is aimed at identifying and characterising the different types of sand that exist in the various desert and coastal regions of the country.

This 'thermal characterisation' process uses advanced microscopy to determine the exact shape of the sand grains under analysis - vital for working out which grains are best suited to being transported by gravity.

The modelling of the SANDSTOCK system is also progress - and Calvet reveals that one of his students is scheduled to visit the 1MW solar furnace in Odeillo, France for a summer internship to test sand under concentrated solar flux at the PROMES CNRS Laboratory in collaboration with Dr. Quentin Falcoz.

Meanwhile, another project designed to explore the potential of using sand as a thermal energy storage medium is also under way in the United States.

Funded as part of the US Department of Energy's SunShot initiative, the objective of the US Solar Holdings project is the further development of an innovative two silo sand storage system known as 'SandShifter.'

A key focus of the initiative is the 'identification and vetting of key issues' for the TES concept - with the goal ultimately being to resolve these issues before constructing and operating a 1 MW pilot demonstration facility.

Another expected outcomes of the project include a thorough 'cost-estimation and analysis' - which will demonstrate the potential cost-effectiveness of the technology at the 50+ MW scale.

The project team also hope to prove that the use of sand as a TES could potentially reduce costs to less than $15/kWth - and achieve what they call 'round-trip efficiencies' at levels of greater than 93%.

According to Calvet, the main technological, operational and cost advantages of using sand for energy storage in CSP systems is the fact that it enables developers to achieve high working temperature at low cost - combined with the fact that sand is also 'easily moveable by gravity'.

However, he also admits that a number of technological and operational and financial challenges remain before sand-based energy storage technology of this type could be deployed at a commercial scale.

"The main technological challenge is how to charge the system - transport the sand by gravity across concentrated solar flux. The efficient discharge process is also an interesting challenge," says Calvet.

"First we want to proof the concept with our 100 kW beam down facility. Then up scaling could be considered. With our proof of concept we could convince industrial partners to invest in our technology," he adds.