A plan to use CSP for process heat at a Canadian paper mill could help demonstrate the value of solar thermal technology for industrial processes even in lower-irradiance areas. 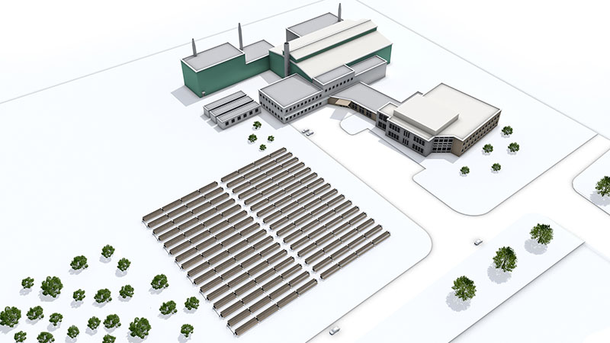 Besides highlighting CSP’s usefulness to the energy-intensive pulp and paper industry, the Cascades project will serve to demonstrate how CSP can provide cost-effective industrial heat even in areas of relatively low direct normal irradiance.

The Canadian solar thermal technology developer Rackam confirmed it would be installing a 1,490 m2 CSP system to reduce consumption of natural gas for the hot water required by the Cascades pulp and paper industrial complex in Kingsey Falls, Quebec.

The CAD$1 million project is supported by Quebec’s department of energy and natural resources and the energy company Gaz Métro, and is one of just two major CSP plants known to be under development in Canada. The other is a 1.1MW plant at City of Medicine Hat.

When complete, the Cascades installation will produce enough energy to raise the temperature of 87,500 m3 of pressurised water a year from 106°C to 118°C, saving 139,700 m3 of natural gas and cutting carbon emissions by 265 tonnes a year.

“The project, which was launched in collaboration with a partner from the region, will allow us to still further reduce the environmental impact of our activities, in addition to reducing our natural gas bill.”

Besides highlighting CSP’s usefulness to the energy-intensive pulp and paper industry, the Cascades project will serve to demonstrate how CSP can provide cost-effective industrial heat even in areas of relatively low direct normal irradiance.

“Canada does not necessarily dispose of the most favourable direct solar irradiation,” admits Ludvig Bellehumeur, director of business development at Rackam, “but it is still much more favourable than other regions of the northern hemisphere given its relatively high latitude.

“Our average irradiation levels are favourable enough to allow significant reductions in energy costs in certain contexts. However, not all regions and industries have an equal demand for the kind of energy that our technology can provide.”

A big problem for CSP in Canada is that clouds reduce the amount of energy that can be transferred to the system. To overcome this, Rackam’s parabolic trough design minimises the amount of material that needs to be heated up when the system starts.

And because Canada lacks tariff support for CSP, the company has eschewed utility-scale electricity generating plants in favour of micro-CSP projects for industrial and commercial use. “This micro application of CSP has many advantages,” Bellehumeur states.

“Since our systems do not require any turbines, they avoid the transformation losses associated with electricity production. They can exploit unused rooftop surfaces. Since solar energy is concentrated on evacuated tubes, they can also operate with minimal thermal losses in winter.”

Rackam’s core market is for industrial applications needing process heat at between 100ºC and 250ºC, which covers industries as diverse as brewing, food processing, dairies and textiles as well as pulp and paper.

“All of them use boilers to generate the heat that is needed for their production,” says Bellehumeur. “The Cascades industrial complex uses natural gas as a fuel for its boilers.

“We essentially replace a substantial part of that natural gas with a clean, efficient and affordable alternative.”

Ed Cahill, solar intelligence analyst with Lux Research in the US, says Rackam’s focus on industrial applications could be a smart move. “In general, we believe this type of project, integrating with a fossil-fuel plant, is the near-term future for CSP,” he says.

“More often than not CSP does not operate well in temperate climates. However, since it is just boosting a fossil-fuel plant, any cloudy days can just be compensated for with natural gas. This type of project is unique in that it integrates with existing infrastructure.”

Cahill says such applications would be attractive in places where there are concerns over grid stability, for example in parts of Europe or America that are seeing a high proportion of intermittent PV or wind generation.

“It is also attractive for utilities trying to profit from renewables as they can own and operate it without much risk to their grid infrastructure,” he points out.

Bellehumeur confirms Rackam is currently installing facilities in Canada, Portugal and the US, and has already completed projects in Canada and Spain. “We expect future deals to be signed in France, Greece, Morocco, Namibia and South Africa,” he adds.

“The thing with our technology is that its viability, and by extension its popularity, does not so much depend on specific industry needs but rather on contextual factors such as the cost of the energy being replaced as well as direct solar irradiation,” he continues.

“In terms of levelised cost of energy, industrial applications of CSP do not necessarily imply very high costs. The required capital investment may sometimes constitute a barrier for some industrial customers, yet a business case for micro-CSP clearly exists.”

To respond to this article, please write to the author Jason Deign.