Hybrid: The new mantra for CSP revival in India

CSP is making a comeback in India with the recently announced solar-biomass power plant. Could hybridisation finally pave the way for CSP deployment in the country? 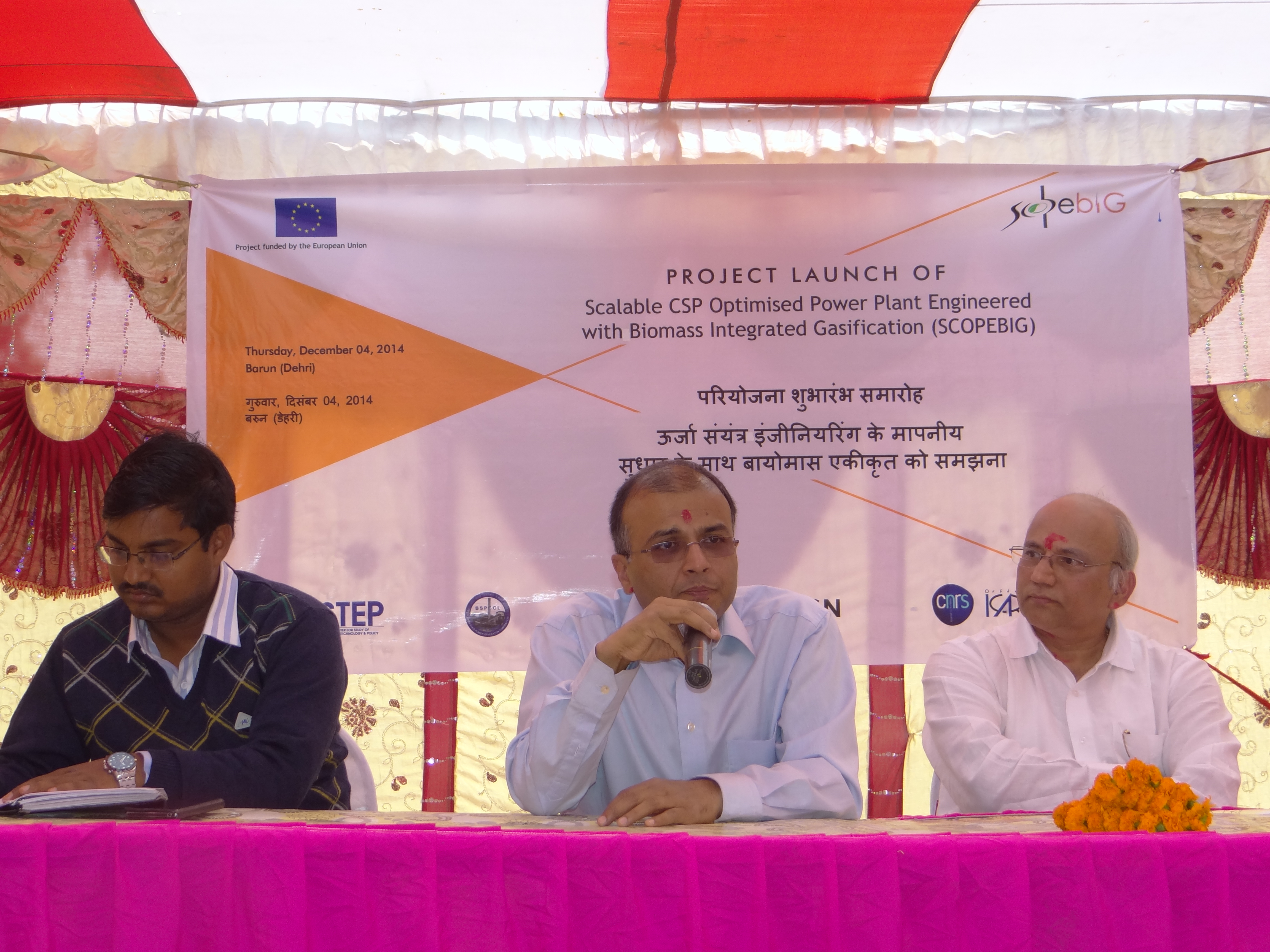 Last month, India’s Center for Study of Science, Technology and Policy (CSTEP) revealed it would be building a 3 MW CSP-biomass power plant in the village of Barun, in the eastern state of Bihar.

Known as SCOPEBIG (Scalable CSP Optimised Power Plant Engineered with Biomass Integrated Gasification), the hybrid project is being set up under the EU-India Cooperation on Renewable Energy with a commitment of around €8 million.

“There was a call from the European Union requesting proposals towards the sustainable growth of renewable energy technologies in India,” Thirumalai N.C., principal research scientist at CSTEP, told CSP Today. “In this context, it was conceptualised to have a solar-biomass configuration in order to achieve a reliable power supply as solar is intermittent in nature”.

A strong Indo-European consortium headed by CSTEP will develop the project. While CSTEP will provide an economic analysis, Thermax Limited and Fraunhofer Institute will develop the low-cost medium temperature solar collectors – which are in operation in Maharashtra and other locations – and France’s Institute of Combustion, Aerothermal, Reactivity and Environment will provide expertise in heat transfer.

As for the developing the gasifier technology, expertise will come from the Energy Research Centre of the Netherlands and from the 250kW plant sponsored by India’s Department of Science and Technology and built by Thermax near Pune.

Finally, at the state level, the Ministry of New and Renewable Energy (MNRE) and Bihar State Power Generation will enable grid offtake, help procure land, and give policy support.

According to Thirumalai, who is leading the project’s implementation, parabolic trough technology with direct steam generation has been selected for this hybrid plant, in which solar and biomass will each contribute 50 % towards power generation.

Among the priorities of the project is to use low-cost solar collectors and to localize all of the components, the latter which would make the power plant a first of its kind in India.

“The components used in this plant, in both the CSP and biomass island will be completely indigenously manufactured,” Dr. R. R. Sonde, executive vice president of research, technology & innovation at Thermax, said during the inauguration event.

The obvious advantage of hybridising CSP with biomass is that such a plant could operate day or night, and even in prolonged periods of cloudiness. However, there are many other advantages to biomass hybrids – from increased cycle efficiencies to the fact that only small changes would be needed when optimising the design, given that the only difference between a CSP and biomass plant is the boiler.

Biomass is abundant in India, especially in Bihar, yet large quantities remain untapped. The MNRE estimates that the country produces 500 million metric tons of biomass per year, 120 to 150 million tons of which are not used.

With the construction of the SCOPEBIG project, CSTEP hopes to demonstrate the viability of CSP-biomass plants at a smaller scale for replication across India, while studying the social effect on rural areas.

Apart from being the lead in a consortium of several reputed organisations, CSTEP is involved in several studies related to solar technologies, and plays a major role in the Solar Energy Integration thrust, which is part of the SERIIUS consortium that is also investigating how to reduce CSP’s levelized cost of energy.

The answer to low DNI?

Some experts believe that hybridized CSP, whether with biomass or conventional boilers, is the technical solution that would address low Direct Normal Irradiance (DNI) and severe variation in India’s weather conditions.

“Operational CSP projects all over the world have been provided with fossil fuel support in the range of 15 % to 30 %,” remarks Gopal Somani, CEO of Maheshwari Mines and Energy Private, and former director at Rajasthan Renewable Energy Corporation.

Average DNI observed at most CSP plant sites in India, he says, is currently in the range of 1,750 to 1850 kWh/m2. In addition, monsoons and heavy windstorms occurring between June and September reduce the DNI to less than 4kWh/m2 per day, meaning that CSP plants will have no option but to close operation, as the steam generated will be insufficient to meet the minimum inertia required to run the turbine.

The state of Bihar, for instance, where the hybrid CSP-biomass plant is being constructed, experiences hot summers and cold winters, with average highs around 35–40 °C in the summer and the lowest winter temperatures in the range of 0–10 °C, as cold as Northern European countries.

On that basis, Somani recommends that CSP plants in India be allowed 15 % - 25 % fossil fuel support for buffering, load balancing, gland steam and barring requirements, and anti-freezing need of Heat Transfer Fluid (HTF). He adds that the misuse of gas to generate power is unlikely, since the tariffs for CSP are much below any value that would make such practice profitable.

Other experts, such as Lavleen Singal, president of CSP development company Acira Solar, believe that India’s DNI is sufficient for stand-alone CSP.

He does stress, however, that the cost competitiveness of CSP over other renewable technologies and its comparison with conventional power plants should come from solar hybrid projects.

“With hybrids and auxiliary fuel, certainly the quality of power would improve. Hybrids with conventional fossil fuels as retrofits and new plants, with a solar contribution of almost 50 %, is the new ‘mantra’ for the revival of CSP. The scale of such projects also plays an important role; for example, a conventional power plant of 1,000 MW with 250-400 MW solar component.”

It is worth mentioning that CSP projects during Phase I of the National Solar Mission were not allowed fossil fuel backup. Consequently, the two pilot CSP projects to be tendered by the Solar Energy Corporation of India (SECI) will be allowed auxiliary use of fuel up to 15 % of total generation, and thermal energy storage will be mandatory with no an upper limit set.

In fact, backup hybridization will be permitted not only with natural gas, but with any other fuel source. The projects, each with a capacity of 50 MW, are seen as way of bridging the gap between Phase I and II by applying the lessons learnt from the initial phase.

While the first project should integrate hybrid cooling, the second should have high operating temperature of at least 470 degrees Celsius and wet water-cooling.

Therefore, he suggests that a hybrid project as the second SECI technology demonstration would be more appropriate than a “tower project with high temperature”.

In a country that imports about 70 % of its oil and natural gas, and relies on coal for more than half of its electricity generation, there is an urgent need to identify cost-competitive renewable energy technologies for large-scale power generation.

And if hybridised CSP can overcome intermittency issues and meet peak-load shortages, then it could certainly be the answer to India’s energy independence.