Until recently, linear Fresnel plants were mainly pilot projects. But with remarkable advancements, the technology is quickly gaining operational parity with the parabolic trough, and the world’s largest Fresnel power plant has already started operation in Spain. 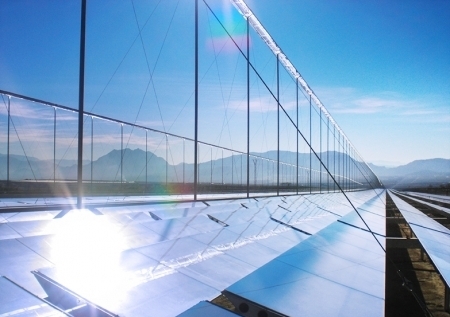 Linear Fresnel is a line-focusing technology similar to the parabolic trough in that it consists of reflectors that track the sun in one axis and focus the beam radiation onto fluid-carrying receiver tubes. The difference is that Fresnel uses a series of long flat or slightly curved ground-mounted mirrors, and the receiver tube is elevated above the mirrors and fixed. Flat reflectors and fixed receivers lead to lower capital costs relative to a traditional trough-based plant.

“General advantages of a fixed receiver include a simple piping system without moving junctions; more flexibility for heat transfer fluid (HTF) selection as a fixed receiver can easily accommodate various types of HTFs, whether it’s thermal oil, water (direct steam generation) or molten salt. Especially with the latter, this can improve the combination potential with thermal energy storage”, Martin Selig, Founder and Management Board Member for Market and Product Development at Novatec Solar, tells CSP Today.

The main advantages of Fresnel CSP systems compared to troughs, according to IRENA’s 2012 CSP report, are that Linear Fresnel Collectors (LFCs) can use cheaper flat glass mirrors, which are a standard mass-produced commodity, and that they require less steel and concrete – as the metal support structure is lighter – which simplifies the assembly process and leads to cost reductions.

Similarly, the U.S. Department of Energy’s CSP Commercial Application Study , states that Fresnel technology offers the promise of cost savings and reduced land use, associated with tight spacing and ground location of the mirrors and fixed receiver. “The relative simplicity of the LFC system means that it may be cheaper to manufacture and install than parabolic trough collector CSP plants”, the report highlights.

Since the wind loads on LFCs are smaller, this results in better structural stability, reduced optical losses and less mirror-glass breakage. Moreover, the mirror surface per receiver is higher in the LFC than in parabolic trough collector, which is important given that the receiver is the most expensive component in both technologies.

The Compact Linear Fresnel Reflector (CLFR) uses a design with two parallel receivers for each row of reflectors – a configuration that minimizes blocking of adjacent reflectors and reduces required land area. Another advantage is that, depending on the position of the sun, the reflectors can be alternated to point at different receivers, thus improving optical efficiency. CLFRs can be scaled according to power plant needs and applied in three different ways: as standalone plants; in booster applications and in industrial applications ranging from enhanced oil recovery and mining, to food processing and desalination.

“According to the status of development in 2012, the parabolic trough seems to be at the end of its evolution because of the temperature limitations, complicated manufacturing and toxicity of the HTF. Therefore, I would prefer the Fresnel technology and the solar tower technology. Both use nearly flat mirrors which enable a higher share of local production”, Dr.-Eng. Hani El Nokraschy, Co-Founder and Vice Chairman of the Supervisory Board of Desertec Foundation, tells CSP Today. “Fresnel may give an additional advantage because of shadowing the ground. This enables planting under the mirror roof protecting the plants from the burning sunrays and thus saving irrigation water”, Dr. Nokraschy adds.

Initially, a water-cooled CLFR plant generating steam directly in the heat collection tube was estimated to require somewhat more water than a trough plant, due to its lower operating temperature. But with the newly developed superheating Fresnel technology, this picture is dramatically changing.

Superheated solar boilers, which form the core of Areva Solar and Novatec Solar’s CLFRs, use vacuum absorber tubes to generate high-pressure, superheated steam (500◦C and above instead of 390◦C for trough) without the costs and permitting complications of fossil-fuel boilers. The higher operating temperatures enable higher solar-to-heat efficiency.

“Specific heat losses are also lower for Fresnel in comparison with the trough due to the higher concentration factor (less receiver tube per unit of mirror area) and the protected receiver of the Fresnel, which results in significantly lower convection losses from wind and air movements”, explains Stefan Nelles, Market and Resource Assessment Engineer at Novatec Solar.

CLFR designs are as suitable as any other CSP technology for combining with air cooling, water cooling, or both, but because CSP plants are located in desert and arid regions of the world where water is scarce, most plants are designed with dry cooling as this uses 90% less water than wet cooling and lowers permitting hurdles.

“Our technology uses approximately half as much water as troughs for cleaning and a closed loop system to further conserve water”,  Jayesh Goyal, Areva Solar’s vice president of global sales, tells CSP Today. Wet-cooled systems do result in slightly better performance, he admits, but “lack of water or high water costs offset this benefit”.

Selig agreeably remarks: “If water is rare, the air-cooled condenser is likelier to be used to reduce water consumption of the plant to a minimum. Novatec Solar has a sustainable approach, trying to consume (natural) resources as little as possible. With this motivation, we have developed a cleaning robot that uses very little water”. The selection of cooling technology, however, will usually come from the EPC contractor and will depend on project-specific requirements and constraints. “At the end of the day, the project requirements drive the cooling design”, says Goyal.

Germany’s Novatec Solar and California-headquartered Areva Solar are both attempting to develop storage solutions for their Fresnel collectors based on molten salt systems, which are proven technologies. “Novatec is developing a solar field system handling molten salt instead of water and steam as HTF, and a demonstration loop will be implemented and tested at our demonstration plant Errado 1 in Spain”.

Areva Solar, on the other hand, is expanding their range of dispatchable CSP designs with a storage solution that incorporates two-tank molten salt storage into their CLFRs. “This solution will help meet the specific energy needs of our customers, as some may have country-specific requirements for storage. The new technology will include a new HTF– molten salt – and modest modifications to our receiver”, says Goyal. In early 2013, Areva Solar will complete a North American CLFR-molten salt storage project and will launch their commercial offer.

India, Australia, MENA as well as emerging CSP hotbeds such as South Africa and Latin America are all well-suited for CLFR for a variety of reasons. “For instance, the Middle East and North Africa (MENA) region can utilize the approximately 630,000 terawatt-hours of solar energy that fall unused on its deserts every year”, says Goyal.

Areva Solar recently entered several markets in MENA and established a regional office in Saudi Arabia. “We are doing this because governments in the region, such as those of Saudi Arabia, Jordan and Morocco, are responding to the growing demand for CSP by implementing policies, programs and tenders that help promote large-scale solar development”, Goyal points out.

Increased domestic electricity demand is another factor driving interest in CSP. India is building the largest CSP installation in Asia with the support of Areva Solar, to help meet the country’s goal of adding 20,000MW of solar energy by 2022. In April, Reliance Power contracted the company to build a 250MW CSP plant in Rajasthan, which will consist of two 125MW CSP plants using Areva Solar’s CLFR technology. The first phase of the project is already under construction, with a target completion date of May 2013.

Meanwhile, Novatec Solar recently unveiled the world’s first commercial linear Fresnel plant, which it began constructing in 2010. “The world’s largest Fresnel power plant, Puerto Errado 2, has started operations in Spain. The plant comprises a 302,000m²-solar field and has an electrical capacity of 30MW”, says Selig. The company’s 1.4MW demonstration plant in Murcia has also been connected to the Spanish electricity grid since 2009.

As of March 2012, there was 1.9 GW of CSP installed, with 1.8 GW of that being parabolic trough. However, looking at the latest advancements in Fresnel designs, such as the incorporation of molten salt storage and the increased operating temperatures, the technology is clearly on the edge of full-scale commercialization.