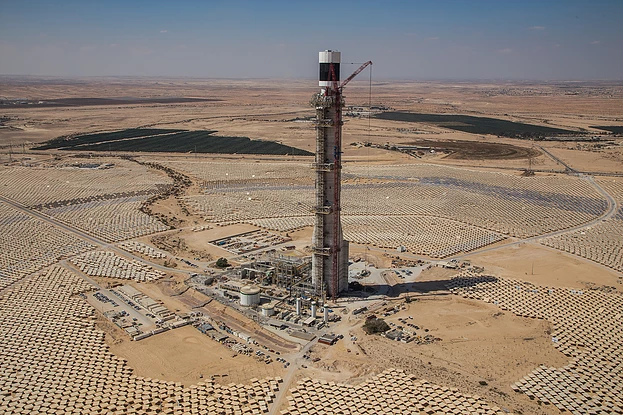 The Ashalim solar tower in Israel, in a photo taken Sep. 2017, a month before the solar receiver steam generator was lifted (credit: Megalim)

Severe air pollution is significantly reducing China’s solar energy potential, particularly in the northern and eastern parts of the country, according to a study from Princeton University.

The issue is worst in the winter when air pollution in these regions blocks about 20% of sunlight from reaching solar panel arrays. This makes air pollution’s wintertime effect on solar energy production as significant as that of clouds, which have long been considered the main hurdle to solar energy production, according to the study, which was published in the Proceedings of the National Academy of Sciences.

The study shows that in the most polluted parts of northern and eastern China, aerosol pollution reduces the potential for solar electricity generation by as much as one and a half kilowatt-hours per square meter per day, or up to 35 percent. That is enough to power a vacuum cleaner for one hour, wash 12 pounds of laundry or work on a laptop for five to 10 hours, the study noted.

Burning fossil fuels increases aerosol concentrations in the atmosphere. Other researchers have recognized that these aerosols, which include sulfate, nitrate, black carbon particulates and brown organic compounds, are contributing to solar dimming over large parts of China. But no previous research had calculated just how much aerosols in the atmosphere are reducing China’s solar energy-generating efficiency.

To calculate how much of the sun’s radiation is reaching solar arrays on the ground, the scientists used what’s called a solar photovoltaic performance model, combined with satellite data from NASA instruments that measure irradiance from the sun and analyze aerosol components and clouds in the atmosphere. They conducted nine separate analyses, which spanned 2003 to 2014 and covered all of China, to compare the impact of aerosols compared to clouds on solar power generation with and without technology that tracks the sun as it moves across the sky.

Xiaoyuan (Charles) Li, a Ph.D. candidate in Princeton’s Department of Civil and Environmental Engineering and the study’s lead author, said the findings should further spur countries like China and India to cut aerosol emissions so they reduce pollution and thereby increase their solar electricity generation more rapidly.

The findings can also help determine where to build new solar arrays, the authors said. Aerosol pollution in China is heavily concentrated in industrialized, urbanized regions, while remote, thinly populated areas have much cleaner air. If research can quantify how much air pollution is reducing solar power output, policymakers can weigh the costs of transmitting electricity from cleaner regions to dirtier ones against the benefits of producing more power by building arrays where more sunlight reaches the ground.

Megalim Solar Power has completed the lift of a solar receiver steam generator (SRSG) at the Ashalim solar thermal power station in southern Israel, the company has announced.

With completion of the lift, the 250-meter tower is now the tallest power tower in the world, according to Megalim, the special-purpose company established by NOY Fund, BrightSource Energy and General Electric to build the 121 MW plant.

The SRSG weighs 2,200 metric tons and is 50 meters tall. It was constructed on the ground next to the tower, and it took around two weeks to life it into place to the top of a 200-meter tower, requiring precise motion control. For the lift, the SRSG was moved inside the tower on skid rails. Twenty mechanical lifting devices known as strand jacks were fastened in place around the top of the tower. Specially braided steel cables were then attached at 20 points at the base of the SRSG. Once secured, the SRSG was carefully raised.

According to Megalim, the lift was a first-of-its-kind due to the sheer density of the receiver, as well as the requirement, to maintain very tight tolerances throughout the duration of the lift. The fact that there was only 25 centimeters of space between the receiver and the tower wall, left no room for error, the company said.

Megalim expects to bring the project online in early 2018, and to produce enough electricity to support the equivalent of 120,000 households during the daylight hours in which the plant will operate.

SolarReserve has put in a bid of less than 5c/kWh as part of Chile’s latest auction for 24-hour energy supply, the company has confirmed.

Twenty-four national and international companies put in “very competitive bids” for the supply of 2,200 GWh / year of energy from 2024, according to the executive secretary of the National Energy Commission, Andrés Romero. It is expected the Chilean government will announce the winners on November 3.

SolarReserve’s bid was aided by local conditions in the Atacama Desert in northern Chile, according to CEO Kevin Smith. Irradiation levels in at part of Chile are “off the charts”, Smith said in an interview with S&P Global Market Intelligence. “That obviously helps.”

SolarReserve has three other projects in Chile, all of which will utilize its CSP tower technology with molten salt thermal energy storage: the 450 MW Tamarugal project, 260-MW Copiapó project, and the 390-MW Likana project. Equipped with 13 hours of storage each, SolarReserve's Chilean power towers are designed as baseload plants.