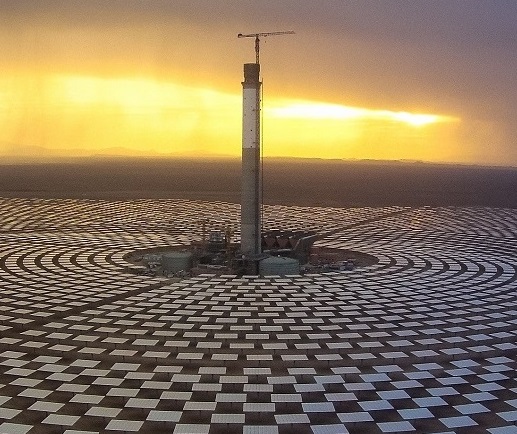 Spain's Sener has completed the first synchronisation to grid of ACWA Power's 150 MW Noor Ouarzazate III (Noor III) central tower plant in Morocco and will soon start final tests before commissioning, Sener announced September 26. The Noor III plant is equipped with 7.5 hours of molten salt storage capacity and is expected to be commissioned by the end of 2018.

Noor III is the third CSP plant in the Noor Ouarzazate complex and the first tower plant. The 160 MW Noor I and 200 MW Noor II parabolic trough plants are already operational.

Sener is responsible for the basic and detailed engineering of Noor III, the supply of thermal storage system equipment, engineering and construction of the solar field and molten salt receiver, and decommissioning of the plant.

The Noor I and Noor II plants use Sener parabolic trough technology and the Spanish company was part of the turnkey build consortium for those projects.

"With its visionary investment in solar power, MASEN has secured a clean, sustainable and manageable power supply for Morocco, while developing the national industry,” Raisuni said.

Revenues in Abengoa's engineering and construction business in the first half of 2018 fell by 24.4% on a year ago, to 458 million euros ($530.9 million), the company announced September 30.

Abengoa filed for Chapter 11 and 15 bankruptcy protection in 2016 and has sold off certain assets to reduce its debt pile. In September 2016, the company signed a restructuring agreement with financial creditors and investors.

"The increase in EBITDA is mainly due to continued reductions in general expenses and increase in profitability in certain projects under construction," the company said.

Abengoa booked in new projects for a total value of 977 million euros in the first half of 2018, for projects in the United Arab Emirates, Chile, Spain, United Kingdom, Mexico and Peru and other countries. The total backlog was 1.9 billion euros at the end of June.

Abengoa has reduced its gross financial debt to 4.6 billion euros, mainly due to the sale of a 25% stake in Atlantica Yield. Gross debt was 5.6 billion euros at the end of June 2017.

"Further [debt] reductions are expected in the short term with the sale of the remaining 16.5% stake in Atlantica Yield. Out of the 4,649 million euros of gross financial debt, 1,150 million euros correspond to debt of companies classified as held for sale," the company said.

In July, Spain's Acciona and Abengoa resumed construction of the 110 MW Cerro Dominador CSP plant after receiving a notice to proceed (NTP) from project owners.

The Cerro Dominador plant is a tower design with 17.5 hours of molten salt thermal storage capacity. Abengoa is acting as technology partner for the engineering and construction project. The plant will be joined with an operational 100 MW PV plant to form a 210 MW hybrid solar energy complex.

The Guohua Yumen project is one of 20 projects being developed under China's Commercial Demonstration Pilot Program. Original developer Guohua Power pulled out of the project in February, along with three other demonstration projects.

The plant will now be renamed the Yumen Shouhang 100 MW Demo Project. Construction is due to begin in October and the plant is due to be completed in October 2020, the reports said.

China is to implement in December the world's first design standards for tower CSP plants, according to a stock-market announcement from China Energy Engineering Corporation (CEEC) last month.

The new technical standards will include the "latest design concepts, requirements and technical level" for solar tower plants and they will play an important “guiding role” in China's first batch of CSP plants, CEEC said.