What’s next for CSP in the UAE?

Abu Dhabi made history when it launched the world’s largest CSP plant, Shams 1, in March 2013. With Dubai’s 1 GW solar park now underway, how open will the market be to international CSP players, and what could possibly hinder CSP development in the UAE? 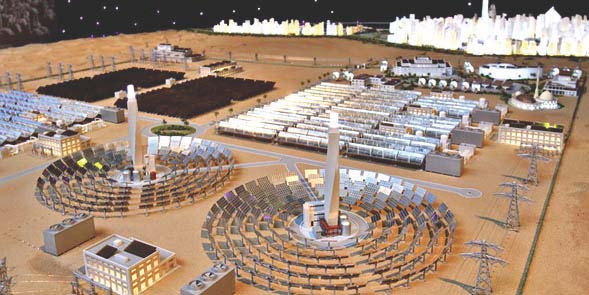 Ever since Dubai’s 1GW Mohammed bin Rashid Al Maktoum Solar Park was announced in January 2012, the CSP industry has been anticipating new opportunities while observing how the project would unfold in terms of the CSP portion.

"The government has not yet unveiled what the breakdown of the 1GW will be. They will likely want to keep their options open as solar technologies continue to evolve. If concentrated solar can prove itself commercially in the region then CSP companies stand a good chance of playing a sizable role in Dubai,” Vahid Fotuhi, president of the Emirates Solar Industry Association, said in an interview with CSP Today.

The first phase of the Dubai Solar Park, a 13 MW PV plant, is already under construction by First Solar, with commissioning to start in September – a month ahead of the project's launch date. Another 100 MW will soon be put out to tender, also for a PV facility, according to local daily The National. This raises questions to where CSP would fit in the big picture.

Waleed Salman, chairman of Dubai Supreme Council of Energy, the authority funding and implementing the project, told CSP Today last year that out of the envisaged 1,000MW, 200MW would be generated through PV and 800MW through CSP. However, the breakdown has not been officially revealed to date, and therefore, changes may take place.

A series of solar discussions

In addition to power generation, Dubai Electricity and Water Authority (DEWA), the state-owned power supplier that will be managing and operating the solar park, plans to incorporate other facilities into the project.

“Not only will the Solar Park deliver 1,000 MW of power to Dubai’s electricity network, but it will host an R&D centre and a renewable energy academy to spur continued innovation,” Fatima Al Shamsi, vice president of New Business Development at DEWA, said earlier this year.

Although DEWA hasn’t revealed which CSP technology would be used in the solar park, nor the percentage of power it would generate out of the 1GW, the utility’s officials have been meeting with numerous international companies, organisations and delegations from the solar energy sector.

In the past year alone, DEWA received delegations from Saudi business conglomerate Abdul Latif Jameel Group, which amongst many segments works in renewable energy, as well as from U.S. renewable energy consultancy Navigant, and Swiss industrial group ABB, a key CSP player providing power and automation solutions for all the main CSP technologies.

In addition to hosting delegations, DEWA officials have been visiting leading solar markets to obtain first-hand insight into the latest renewable energy innovations. Last year, a DEWA delegation spent one week in the U.S. visiting public and private sector organisations, including the U.S. Department of Energy and Silicon Oasis. More recently, DEWA visited China to observe the country’s achievements and best practices in the renewable sector, and toured the Changzhou Solar City.

One of the first visits made by DEWA, however, was to Masdar City and Shams 1, with the objectives of creating closer ties and sharing experiences between the two organisations.

“Masdar welcomes Dubai’s move into solar as it will attract more investment into the growing PV and CSP sectors in the UAE. We not only look forward to the additional attention this move will bring to the local renewable energy market, we look forward to the additional renewable energy capacity this will add to the UAE energy mix,” Yousif Ahmed Al-Ali, general manager of Shams Power Company, told CSP Today.

In desert areas like the southern and western regions of Abu Dhabi, where vast sand dunes merge into the Empty Quarter, the loss of direct solar radiation can be substantial due to high dust concentration at the lower layers of the atmosphere, according to Al-Ali.

In fact, dust can reduce Direct Normal Irradiance (DNI) to levels below 2,000 kWh/m2/yr, which is a relatively low solar insolation when compared to locations in Spain and southern USA where DNI varies from 2,000 – 2,700 kWh/m2/yr.

“I see two big challenges for CSP companies,” notes Fotuhi. “First, international CSP companies need to demonstrate that their technology is commercially and operationally viable in hazy and sandy conditions where Global Horizontal Irradiance (GHI) levels are low. This has so far been the Achilles heel of CSP in the Gulf”.

“Second, the soil in Dubai is very soft and corrosive; it’s not clear if the heavy steel structures required for CSP would be sustainable for Dubai. This is not to say that it’s not possible, it just means that there’s some ‘ground-work’ to be done first”.

Although Masdar opted for parabolic trough technology for Shams 1, as long as CSP technologies can prove their operational viability and bankability, be it parabolic trough, solar tower, linear Fresnel or dish Stirling, the UAE market will be open for them.

“Given the UAE’s available land and abundant solar potential, there is room for other CSP technologies in the region, given they are proven, scalable and bankable. CSP offers base-load generation capacity and the potential for large-scale energy storage, which both help stabilize the grid,” Al-Ali highlights.

A market worth entering?

To date, the UAE has not yet formulated a local content policy, but Fotuhi suggests that the country may do so in the future, especially since it has the necessary infrastructure and labour force needed to localize the CSP supply chain.

“With the world-class Shams 1 CSP project already installed and commissioned in Abu Dhabi, I would say that there is already sizable CSP ecosystem in this country. The foundation is there for other CSP companies to build on. But first they must demonstrate that they are as competitive as PV in generating low-cost electricity in high-soiling environments. If they don’t then we can expect to see the current ecosystem start eroding”.

Robin Mills, head of consulting at Dubai-based Manaar Energy and author of The Myth of the Oil Crisis, shares a similar view: “I think the main issue at the moment is that, given the dramatic fall in PV costs, that is shifting attention towards PV for Dubai and Abu Dhabi for now”.

As reported previously by CSP Today, PV was chosen for the first phase of Dubai’s solar park, because it has less interconnectivity requirements than CSP and because DEWA’s existing grid is available in the area.

For the time being, Masdar has no plans for CSP development in Abu Dhabi. “We will continue to assess the performance of Shams 1 over the coming months and keep a close eye on technological advancements in the industry, especially as it pertains to the region,” notes Al-Ali.

Despite CSP not featuring in the UAE’s immediate agenda, Fotuhi believes that it would be prudent for international CSP companies to start looking into local partners now. “Developing relationships with local suppliers and partners is a long-term commitment and so the sooner you start, the better”.