CSP components distributors have saturated UAE’s solar markets with foreign imports. However, the balance is shifting as more local manufacturers enter the market. 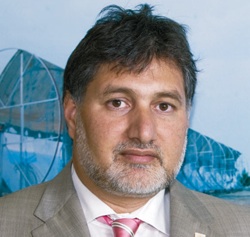 Until now, foreign products and systems have continued to dominate United Arab Emirates’ solar power markets. Relying heavily on imports rather than local manufacture, CSP component distributors in the United Arab Emirates (UAE) have facilitated the installation of a range of solar technologies across multiple industries.

But that may be about to change. Original equipment manufacturer Mulk Renewable Energy, a subsidiary of UAE-based Mulk Holdings, has emerged as a viable competitor on the local and global CSP components markets, following the launch of its US$82m solar mirror production facility in Sharjah in 2009.

Mulk is the first company in the UAE to produce solar metallic composite mirrors of high performance, solar troughs and solar PV platform systems. The company offers a patented Alubond Solar Collector Mirror - a lightweight composite metallic mirror with a solar reflectance ranging from 91% to 95%. It claims that its strong weather and corrosion resistance, longevity and adhesion properties make the aluminium reflector a viable alternative to heavy, glass mirror technology.

According to Mulk, its aluminium collector is four times lighter than heavy mirrors (which usually weigh over 12.5 kgs), and can reduce the metal sub structure by up to 300% - while retaining a parabolic shape to precise coordinates. Mulk’s American division managing partner Khurram Nawab designed the collector.

Having partnered with Enpar Group, Mulk also offers Suntrof parabolic trough systems, which it says can lower operational and maintenance costs using a stationary receiver tube, as opposed to a conventional moving tube.

The company says that combining Suntrof’s systems with Mulks’ Solar Collector Mirrors can reduce installation time by around 5-7 months, with an area of 3 to 3.5 acres needed to generate 1MW of electricity. It says its solar trough system is expected to lower current costs of solar generation by more than 50%.

According to Mulk, its collector mirrors were tested in the United States and have been chosen for over US$200m solar energy generation plant projects in the USA and worldwide. A plan for a 250MW Solar Trough Project is currently being discussed; one that will require an additional 17.5 million square feet of solar collector mirrors from Mulk’s USA and UAE production facilities.

In April 2010, Mulk Renewable Energy signed a US$545 million deal with India-based Aditya Solar Power Industries to install a 200MW solar thermal project in India. The joint venture will be executed in two phases; a 40MW solar energy plant will be completed before the end of this year during the first phase, while the second phase of 160MW plant will be successfully accomplished by 2013.

Major components for the project will be manufactured in the UAE and exported to India for the initial phase, including all components of Mulk Enpar Renewable Energy Parabolic Troughs and Alubond Solar Collector Mirrors (ASCM). Meanwhile, a full-fledged manufacturing facility with a capacity of 500MW will be established in India for the coming phases.

Meanwhile, Germany’s Man Ferrostaal has been extending reach into the UAE. The company owns 43.8% share in the Solar Power Group (SPG), a developer and constructor of solar power plant components based on the Fresnel technology.

The group's regional turnover of more than one billion Euros in mid 2006 has led to the opening of the MAN House, MAN Ferrostaal's regional headquarter, in Dubai. “By concentrating on growth areas, we can offset businesses where we are currently making a loss," said Dr. Matthias Mitscherlich, Chairman of the Executive Board at MAN Ferrostaal.

A 2008 report published by Dubai Chamber said that “the availability of relatively cheaper fuel in the UAE has made unattractive the pursuit of the use of renewable sources of energy as alternative or complementary sources to meet the demands of the population and business and industries”. Two years on, amongst potential investors and manufacturers remain similarly discouraged.

Local suppliers have expressed their concerns over the vague ownership scheme of renewable energy at a governmental level. “To have a sustainable flow of installation to move forward and meet targets, we need proper government incentives programmes”, said Sami Khoreibi, CEO of Enviromena Power Systems.

Mulk’s joint venture with India will receive generous feed-in-tariffs from the Indian government, yet the Middle Eastern countries still lack similar policies in the renewable energy, which is considered as one of the main hurdles to local companies.

“[No-one] can go and invest in a solar plant and compete with coal, so the governments here need to offer more”, commented Mulk chairman Nawab Shaji Ul Mulk.

According to Mulk’s managing partner Khurram Nawab, the domestic and regional markets will only grow if a solar policy was created with attractive feed-in-tariffs. “This has to come from the top policy makers of the country to encourage solar power developers”.

Using India as an example, Nawab explained that at present, Mulk Renewable is highly focusing on India because of the new JNNSM solar policy, which is allocating a total capacity of 450MW for phase one of the solar PV and thermal projects, and the feed-in-tariff rate of $34 cents.

Masdar City is already looking into local manufacture, which could possibly flood the market and result in an oversupply of products. However, last month, Masdar announced that the Shams 1 solar power plant in Abu Dhabi would receive less energy than anticipated owing to  dust particles in the area, which block sunlight. “Dust in the atmosphere absorbed a substantial part of the direct irradiation”, Masdar power director Frank Wouters said.

According to a joint A.T. Kearney and ESTELA study, by 2015, solar thermal electricity will be able to run with a profitable business model - challenging conventional and other renewable energy sources without any subsidies. As a result, energy production can be expected to be boosted by more than 10% and plant capex reduced by 20%”.

The study found that because solar thermal systems require much less space, many fewer collectors, and are about five times cheaper than solar PV panels, they are six times more efficient at 20% of the cost of its rival. “There have been new innovations in thermal storage techniques, if only practical on a commercial scale at the moment”.

Or write to the editor: Rikki Stancich