Political turbulence coupled with the spectre of peak oil looming in the Middle East, makes renewable energy less of an option and more an imperative. 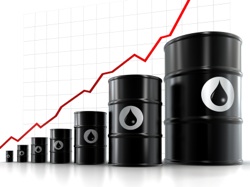 A combination of fluctuating oil prices amid political instability in the Middle East, and accelerating energy demands in the region is making renewable energy investments not just a timely solution but a highly profitable gateway that promises to transform SMEs into global market leaders.

Ongoing political riots across the Middle East have disrupted crude oil supplies from the region, raising prices to above US$110 a barrel for Brent and US$98 for WTI crude oil.

Even after the resignation of the Egyptian president, analysts and brokers remain cautious about the implications of Egypt’s political transition for the broader region, where protestors are demanding changes in Tunisia, Jordan, Yemen, Bahrain, and most recently, Libya.

“Crude futures have fallen back on the news of Mubarak stepping down. But lower prices may be temporary here (in the US) as traders will again look broadly and see if protests in Egypt may spark other similar movements across the Middle East”, Mark Waggoner, president of Excel Futures recently told Reuters.

This week, Libyan president Moammar Gadhafi warned the public of continued anti-government protests, saying they may lead to a civil war that could send the country's oil wells up in flames. But long before the protests, Libya, Africa’s fourth largest oil producer, kept a tight lid on its oil reserves.

The OPEC country is historically known for demanding political concessions in exchange for commercial deals. Samuel Ciszuk, a Middle East analyst at IHS Global Insight says that Libya has a "pattern of using its oil and gas reserves for political ends”, and a tendency to apply "political pressure to influence negotiations" with oil companies or their home governments.

Libya has also proved to be a difficult country to operate in, since oil companies are often faced with hefty customs duties on imported equipment, despite the exemptions written in their contracts.

Further fuelling price volatility is the recent Wikileak, which resurrected concerns over Saudi Arabia’s exaggerated oil reserves. The Wikileak suggested that Saudi’s reserves are being overstated by as much as 40%, bringing the “peak oil” debate once again to the fore.

OPEC’s oil production capacity is currently being stretched due to Saudi Arabia’s own energy demands, which must be met before local crude oil is exported. The kingdom is the largest producer in the 12-member oil-exporting cartel.

Industry officials have predicted a tripling in Saudi power consumption to around 120 GW by 2032 from around 40 GW in 2010. This rate of expansion could consume all of the 8 million bpd the country produces.

Although OPEC members claim they have spare oil production of nearly 4 million bpd for 2011, according to Steven Kopits, head of the New York office of Douglas-Westwood energy business consultants, the effective spare capacity of oil in the entire global system may not be more than 2.25-3.25 million bpd.

This low spare capacity with increased energy demand would result in the surplus capacity being consumed within a short period, and by 2012, Kopits projects that spare capacity could be as low as 1 million bpd, or even less.

“In the better case, the world is facing tight oil markets in 2012; in the worst case, the country (Saudi Arabia) may be heading into another oil shock and recession”, Kopits says, adding that could have a material influence on the 2012 US elections.

He says an oil shock is likely by 2013, even if the US is lucky enough to escape one in 2012, due to Saudi Arabia’s ability to raise oil prices not only by withholding production, but by releasing it too slowly.

Similarly, Europe is dangerously dependable on Russia for energy. Being the world’s largest holder of natural gas reserves and the second largest of coal reserves, Russian dominance over Europe’s energy has raised alarms in foreign policy circles. Several European countries are now working on diversifying their energy sources and streams.

The Chinese government has already launched a massive renewable energy program that aims to generate 15% of its energy needs from clean energy by 2020. China invested US$35 billion in clean energy in 2009, almost twice the amount of US investments in the same year.

Current price volatility and uncertainty over global oil reserves create a compelling case for renewable energy investments. “The way to play the coming energy crunch is to invest in the companies that have the products that will replace oil in the energy network”, says Timothy Lutts, Chief Investment Strategist and President of Cabot Heritage Corporation.

According to the Energy Information Administration (EIA) International Energy Outlook 2010, renewable energy will gain a growing share of total energy use from 2007 to 2035, outstripping that of petroleum liquids, despite starting from a much lower level.

While natural gas consumption is expected to increase 44%, coal 56% and nuclear power generation 74% in the same period (2007-2035), total renewable energy use - including liquid biofuels – is estimated to grow a staggering 111%.

Russia’s Prime Minister Vladimir Putin had signed a directive calling for a more than 400% increase in renewable electricity generation by 2020, and in the Middle East, solar energy use has grown by 40%-50% per year over the last ten years.

As Jeremy Leggett recently pointed out in an interview with Guardian, the peak oil debate is all about timing; and it involves huge stakes. He warned: “We are asleep at the wheel here: choosing to ignore a threat to the global economy that is as bad as the credit crunch - and quite possibly worse.”

To respond to this article, please write to: Heba Hesham