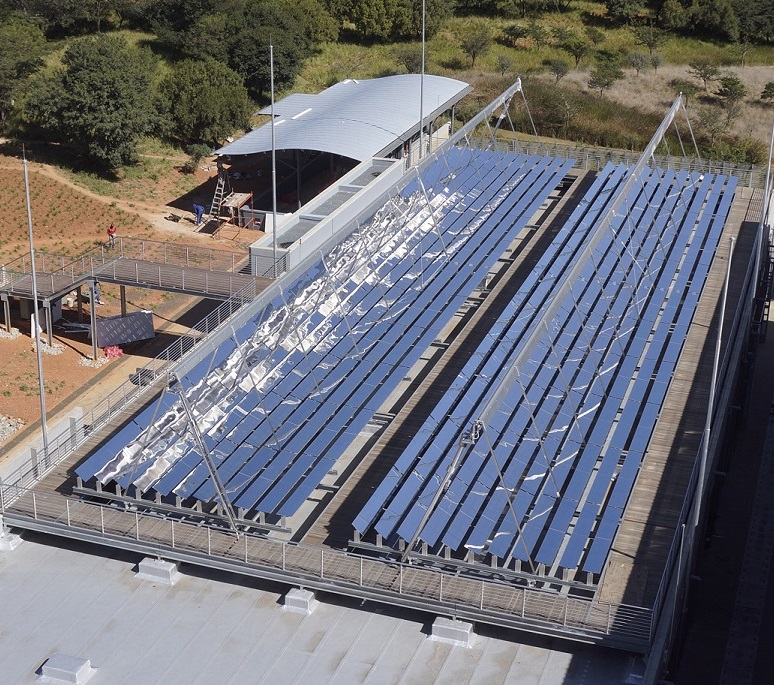 South Africa is considered one of the fastest growing CSP markets in the world today with 200 MW installed capacity and another 500 MW under construction and development, according to the CSP Today Global Tracker.

“However, opportunities exist for the formation of an industry supporting CSP locally, not only in the power generation business but also on High Temperature Applications (HTAs).” Rajpaul added.

In such applications, solar fields would be coupled with secondary industries such as smelters, mining, cement manufacturing and chemical processing plants.

Rajpaul said that HTA is an area currently being researched in South Africa, adding that the South African Solar Energy Technology Road Map confirmed that a vast potential for HTAs exists in the country.

Frank Dinter, Eskom chair in CSP and director of the Solar Thermal Research Group (STERG) at the University of Stellenbosch, also believes that industrial process heat is where CSP can play a major role in South Africa given the abundance of locations with excellent DNI.

Dinter said that a huge portion of energy that industry consumes is used to produce heat. Some estimates suggest that up to one third of energy is used for this purpose alone.

“STERG has active research investigating solar heat for industry, specifically for applications such as sugar mills where process steam up to 400 degrees C is required,” Dinter said.

Similarly, Wim Jonker-Klunne, director of the Energy and Environment Partnership Program of Southern and East Africa (EEP S&EA), sees process heat applications, in addition to electricity generation, as the most promising area for CSP growth beyond the REIPPPP.

One Solar-heat application was demonstrated at the end of 2015 when Cape Brewing Company used CSP to produce South Africa’s first commercially available “green beer” that uses solar-heated water in the brewing process in partnership with E3 Energy.

A range of uses

Besides process heat applications, solar cooling using absorption chillers are a promising area where CSP can play a significant role and contribute to energy savings in South Africa’s hot summers.

One unique completed project is MTN’s Solar-Cooled Data Center in Johannesburg, where Linear Fresnel Collectors are used to supply 330 kW of cooling power in partnership with Industrial-Solar GmbH.

According to Rajpaul, CSP can also be fed into the rankine cycle of existing power plants through augmentation or hybridization to reduce the net and absolute emissions of those plants.

Another opportunity lies in de-centralized CSP systems ranging from 100 kW to 5 MW for micro-grid or off-grid population centers.

“For these types of solutions smaller CSP towers hybridized with micro-turbines have a great potential. Within this scope and in an attempt to reduce CSP costs in general, the Helio-100 project, a spin off from STERG, is developing and actively marketing a scalable 100 kW solar tower with a low-cost field,” Dinter noted.

Longer term, from 2030 to 2050 CSP technology could play a role in reducing South Africa’s carbon footprint in the fuel production sector through the use of solar technology to produce liquid fuels, Rajpaul said.

Despite the numerous possibilities for harnessing CSP, the only incentives currently available for the technology outside of the REIPPPP are for Solar Water Heaters (SWH).

“The government started a SWH rebate incentive program in 2008, but there are no incentives for industrial solar process heat,” said Dinter.

“More incentives should be introduced if the government and the energy department want to increase the share of solar power and renewable energy in general. For example, by obligating energy-intensive industries such as sugar mills, mining and dairy producers to procure a portion of their energy needs from renewable sources,” Dinter added.

Such a mechanism, similar to the UK’s Renewables Obligation, would incentivize industrial solar-process heat installations and drive down costs.

Considering that the cost of capital is a significant factor in determining CSP’s Levelised Cost of Electricity (LCOE), greater involvement by Development Finance Institutions (DFIs) would also encourage the development of more plants.

Many DFIs have already supported REIPPPP projects by providing funding at a lower cost of capital in comparison to commercial banks.

This means that DFIs are familiar with CSP technology and funding should not be a bottleneck.

Getting a bankable PPA could be an issue, however, as Jonker-Klunne highlights. “Within the REIPPP process, all requirements, including the PPA, are well defined. Outside the REIPPP, you will need a PPA with a municipality for example, which are not known for their prompt payment, or with an industry. These will need to get approval by the regulator, NERSA.”

If power is to be transported out of Eskom’s grid to an external load source, “wheeling agreements” need to be put in place, a process which has also proven to be difficult, Jonker-Klunne noted.

To this end, South Africa “should continue building CSP plants,” he said.