The CSP industry has witnessed an exhilarating series of developments over the last few years. While emerging markets like South Africa and Morocco continue to advance, others, such as the UAE and Saudi Arabia, are progressing at a slower-than-expected pace. 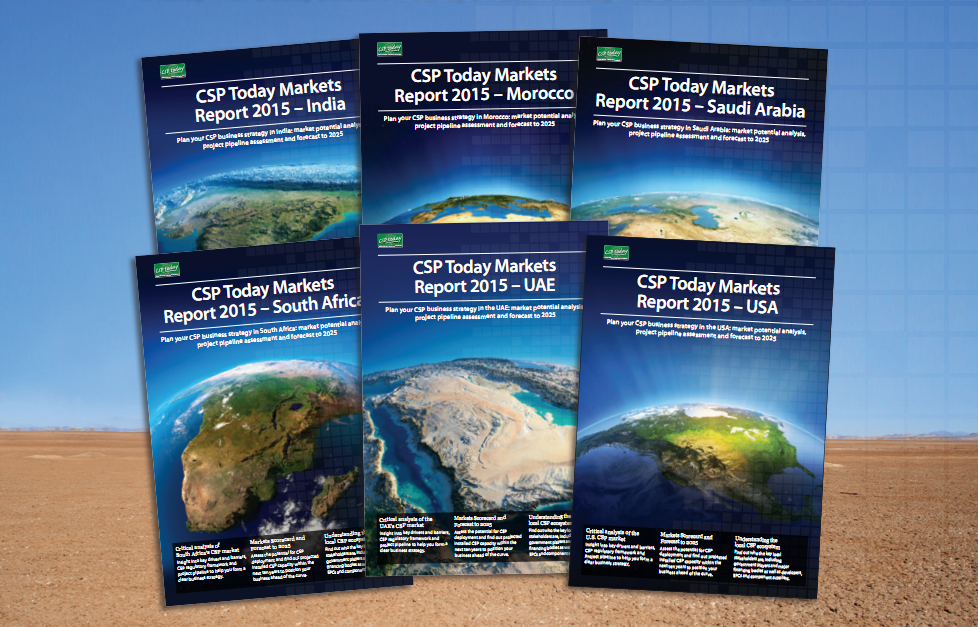 At the same time, confidence is growing in CSP technologies, as evident from the large-scale installations that recently came online in the USA – an established market that is quickly saturating.

These multidirectional movements in the global CSP landscape have made developments difficult to track and expansion decisions tougher to make, especially in potentially lucrative markets where uncertainty still looms.

However, by evaluating a number of indicators, including national CSP targets, project pipelines, and available renewable energy support, the strengths and weaknesses of a market can be assessed, and a clearer picture can be formed of where a CSP market is headed in the long run.

According to the CSP Today Markets Reports Series 2015, installed CSP capacity worldwide – which reached 3,565 MW in 2013 – is expected to more than double over the next decade.

Under an optimistic, conservative and pessimistic scenario, the Markets Reports forecast that by 2025, global CSP installations will reach a capacity ranging between 8,240 MW and 17,100 MW.

In addition to the global overview, six key CSP markets – India, Morocco, Saudi Arabia, South Africa, the UAE and the USA – have been analysed, one for each of the reports in the Series.

These markets have been the centre of attention of the global CSP industry due to their high solar resources and political commitment demonstrated to solar energy. Yet such factors alone are often insufficient to trigger an investment decision.

Therefore, the CSP Today Markets Reports analyse the strengths and weaknesses of each market, evaluate their readiness for CSP and assess their longevity and associated potential return on investments.

USA: Ahead of the game

Among the six analysed CSP markets, the USA ranked number one in terms of readiness for CSP. The ranking was primarily driven by the CSP project pipeline and renewable energy support represented by government-funding opportunities and state-level incentives.

With nearly 1,495 MW of operational plants as of September 2014, in addition to 111 MW in commissioning and 287 MW under construction, the U.S. CSP market is currently the largest in the world.

By 2025, CSP capacity in the U.S. is forecast to reach between 2,325 and 3,530 MW, propelled by the growth of hybrid and alternative applications, superior solar irradiance levels in the southwest region, the availability of substantial data from large-scale operational CSP plants, and a robust CSP supply chain.

The projected growth, however, could be impeded by the accelerating shale gas production and complexity of the permitting process for CSP projects.

South Africa: On the fast track

Ranking second in the Markets Scorecard, South Africa has seen an increasing commitment to CSP deployment from both the government and local financing institutions. This is evident from the country's national target of installing 1,200 MW of CSP by 2020, which could be increased to 3,300 MW should the IRP Update be approved, and from the ease of financing CSP – nearly 60% of the funding provided for the REIPPPP projects came from local banks.

The South African CSP market currently comprises 0.33 MW of operational plants and 200 MW under construction. By 2025, installed CSP capacity in the country is forecast to reach between 725 MW and 2,132 MW.

As the South African Markets Report highlights, factors such as the increasing energy demand, high electricity prices, and limited proven reserves of oil and gas are expected to drive CSP growth in South Africa. As much as 40,000 MW of new generation capacity is needed by 2025, according to the country's Department of Energy.

Similarly, the availability of CSP incentives, which include a competitive bidding system and a time-of-day tariff, is expected to positively influence future deployment of CSP. Some factors, however, could hinder progress – most notably the outcome of the proposed IRP Update, the decreasing freshwater resources, grid limitations, and new discoveries of shale gas.

Morocco's ranking as the third most promising CSP market mainly stems from the fact that the country lacks indigenous oil resources and imports all of its coal requirements. Also contributing to the market's ranking are the incentives available for CSP projects, the solar energy target of 2,000 MW by 2020, and the encouraging project pipeline.

Although Morocco only had one 20 MW operational plant as of September 2014, it has 163 MW under construction and 300 MW under development. Moreover, it is worth noting that the country achieved its 2012 target of supplying 8% of total energy from renewables.

The Moroccan Markets Report forecasts that the country will have between 440 MW and 2,303 MW of installed CSP capacity by 2025, largely driven by the need for energy independence and security. On the other hand, decreasing freshwater resources and ongoing exploration for unconventional fossil fuels may negatively affect the speed at which CSP is deployed in Morocco.

Ranked fourth in the Markets Scorecard, Saudi Arabia's consideration of CSP lies in the increasing demand for power and the simultaneous need to save indigenous oil resources for higher-value uses and more profitable export.

Although no CSP project tenders have been announced since the release of K.A.CARE’s Competitive Procurement Process White Paper, an increasing trend has been witnessed toward the acquisition of international CSP manufacturers by government- and privately owned Saudi conglomerates. This trend, along with the various research and development activities being carried out at academic institutions, indicates a preparatory phase that will likely be followed by a market take-off.
As shown in CSP Today’s Saudi Arabia Markets Report, only two 50 MW CSP projects have been announced in Saudi Arabia to date, both as part of Integrated Solar Combined Cycle (ISCC) plants. By 2025, the report forecasts that installed CSP capacity in the Kingdom will reach between 908 MW and 2,899 MW.

India: A mission to complete

India's National Solar Mission, which started on a strong note in 2010, saw only one CSP plant materialize and connect to the grid within expected timeframes. Consequently, India was ranked fifth among the six key CSP markets analysed. That said, government incentive schemes, along with new CSP hybridization avenues and a tremendous need for additional energy capacities are collectively reviving the market.
As of September 2014, India had around 182 MW of CSP projects in operation and commissioning, and another 76 MW under construction. By 2025, the country's installed CSP capacity is forecast to reach between 446 MW and 1,756 MW, based on figures from the Indian Markets Forecast.

India has not set out long-term CSP-specific targets, but it did announce a solar energy target of 20,000 MW by 2022 and demonstrated support for the technology through various subsidy programs. What could potentially slow down CSP progress in the country is the uncertainty surrounding Phase II, as well as the price-competitiveness of PV and conventional power.

UAE: Promising market at a standstill

In early 2013, the UAE grabbed international attention with the installation of the 100 MW Shams 1, the world's largest operational CSP project at the time. Since then, however, no major progress has been made toward further CSP developments in the country, and only a 110 kW dish Stirling plant and a plant of unconfirmed capacity have been announced. Moreover, energy demand is not a key driver of CSP deployment in the UAE, and therefore, the country ranked sixth among the CSP markets analysed in the Markets Reports Series.

Nevertheless, the government is keen to diversify the country’s economy and reduce its dependence on hydrocarbons, as witnessed by the significant investments being made in non-oil sectors. Furthermore, the expanding population and industrialization, along with the lack of natural gas resources, may eventually propel CSP deployment in the UAE, given the presence of a well-established construction industry, a financially sound banking sector and reasonable levels of DNI.

The potential of hybridizing CSP in ISCC plants and using the waste heat in desalination could specifically open up new avenues for the market, contributing to the projected growth of installed CSP capacity in the UAE, which according to the UAE Markets Report is forecast to reach between 233 and 504 MW by 2025.