A second chance for CSP in India

After postponing Phase Two bidding for CSP projects in December to focus on Phase One, India’s Ministry of New and Renewable Energy has now extended the completion deadline for the delayed NSM projects under Phase One. What led to this decision and how will it impact future projects? 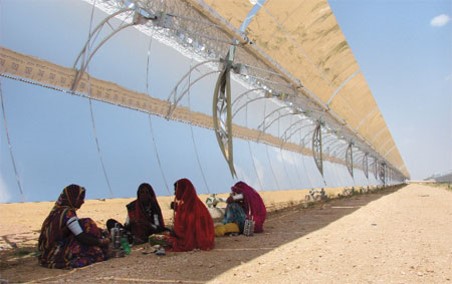 Relief from millions in fines

A lenient move made by India’s MNRE to stretch the completion deadline for seven delayed CSP projects under the National Solar Mission (NSM) Phase One and waive millions of dollars in penalties has been well-received by stakeholders and solar communities all over the world.

“The expert committee and MNRE key officials, after a thorough review and site visits realized that developers are serious and committed to deliver. They also witnessed remarkable progress through extremely hard work at sites on this complex technology happening for the first time in India”, Gopal Lal Somani, CSP expert and former Technical Director at the Rajasthan Renewable Energy Corporation Ltd. (RRECL) in Jaipur, told CSP Today.

“CSP has a very good future in India – just one successful commissioning of a CSP project will be enough to boost the confidence of investors. The Godawari Green 50 MW Project which is likely to be commissioned shortly will be India’s first large-sized CSP plant,” says Jeevan Jethani, principal scientific officer at the MNRE.

Agreeably, Manoj Divakaran, president and CEO of Empereal Energy Incorporated, said that it was a much-needed show of support from the government to a new industry that is dependent on many external factors for its success.

“CSP Phase I projects have been delayed due to unavailability of site infrastructure and reliable DNI data site-specific files, while confidence of lenders in CSP technology for financing and equipment delays from global suppliers caused delays. India’s CSP industry needs the MNRE’s support to bring these plants online and gain the experience of operating them”, notes Somani.

“I do think this was a positive step by the government. However, strict monitoring and involvement should be undertaken to ensure that this extension is not abused by the developers”, he adds.

The reason for the deferral of 470 MW and not all 500 MW of CSP projects, according to Geetanjali Choori, CEO of Energy Guru and Sharper Sun, was that the 30 MW CSP projects under the Migration Scheme, which already had signed PPAs with different policies, were moved under the NSM.

“The decision has been taken to boost and realize CSP Phase 1 projects which were awarded through reverse auction process; the 30 MW capacity sanctioned under the migration scheme were not covered”, Somani highlights. These were 10 MW-projects to prove technology viability, had the highest tariff offered under the NSM and had 28 months to complete.

Meanwhile, under the NSM Phase One Batch One, 470 MW projects were signed in 2011, which were of a much larger size (20 MW to 100 MW), and also had 28 months for completion. “Considering the size of projects and aggressive timelines, most of the projects have experienced varying delays in timely completion. Hence, the MNRE decided to defer only these projects”, notes Choori.

Looking back at what triggered these delays, the local industry has unanimously cited several‘external’ factors. Firstly, following the announcement of Phase 1 projects – both Batch 1 and Batch 2 – PV prices started to fall sharply and CSP projects costs did not fall in a similar way. This possibly led developers to delay some of their buying decisions.

In addition, suppliers were unable to provide guaranteed supply in time due to lack of clarity in the market size as well as the risk in production ramp up. This is besides the delays in laying a water pipeline by Rajasthan – which held up Reliance Power’s 100 MW project – and the huge gap between the predicted annual DNI (2,000 to 2,100 kWh/m2) and the actual DNI measured in 2011 (1,750 to 1,900 kWh/m2).

“PV looked much more attractive to finance compared to CSP due to its proven status so getting financial closure on attractive terms was an issue. Considering the larger size of CSP projects, the amount of funding needed was also much more and thus multiple lenders were involved in financing these projects, which in turn delayed the process,” explains Choori.

The lack of essential components, such as the Heat Transfer Fluid (HTF), also caused prices to escalate. “Technology is costly and monopolized by a select few, and financiers hesitate to support such high-cost projects fearing losses on their investments”, says Hiro Chandwani, chairman and managing director of Hiro Energy Technology Ltd.

The most prominent reason, he says, was the inability of the bidders to close financial arrangements. It was like an open book that with low bids, high-cost technology, and absence of cheaper indigenous technology - we cannot win the confidence of the financiers and their hesitation to support such projects is justified”.

Lanco Infratech, which is developing 100 MW of CSP under the NSM in northern Rajasthan and is the EPC contractor for KVK Energy & Infrastructure’s 100 MW CSP project, had to reengineer both projects to make allowances for differences in radiation levels and delays in getting HTF from U.S. suppliers.

The biggest challenge, however, was the unfamiliar territory of CSP for developers. “Considering the fact that India was implementing large CSP projects for the first time, there was a learning curve at every front, which would have an impact on project commissioning dates,” notes Choori.

Despite the initial financing difficulties, the picture is gradually improving. Satnam Singh, chairman of Power Finance Corp., India’s biggest state lender to electricity utilities told Renewable Energy World earlier this year that the bank was cutting lending rates for renewables because they could see better returns in the near future.

Reliance Power also managed to achieve financial closure in October 2012, with a $302 million borrowing for its 100 MW Fresnel plant – estimated to cost more than $400 million.

To improve the future prospects of CSP in India, Choori suggests that local manufacturing of components like glass, HTF and pumps, hybrid projects, dry cooling and CSP with storage, should be incentivized and supported by the MNRE for the benefit of a reduced LCOE; and that banks become educated about CSP and facilitate funding to this scalable technology. She recommends that the MNRE involve themselves much more in the project execution stage to understand the risks in commissioning on a quarterly or monthly basis.

“The MNRE should protect all high DNI locations from being acquired by PV developers and hold them for allocation to CSP developers. It should consider supporting hybrid projects – with biomass and coal –through a preferential tariff”. In addition, after all these project delays, the MNRE/Central Electricity Regulatory Commission may eventually be driven into revising tariffs.

Meanwhile, the human capacity that was built during Phase One could get disbursed if more CSP projects were not announced, Choori warns.

Nevertheless, achievements made during Phase 1 cannot be overlooked. According to Somani, these include huge cost reductions in the supply of the solar field (from $4/watt to $2/watt); in solar energy ($0.28 to $0.19) and in HTF (approaching less than $3.4/kg).

Localization of around 45% in parabolic trough and 65% in CLFR AREVA technology has also been achieved, EPC turn-key suppliers are now available, and the Balance of System and electrical items can be sourced locally. This competitive market is driving CSP costs down.

“CSP has great potential in India, both in the power sector as well as in providing various applications of industrial heat and steam requirements. There are large number of opportunities in industrial process steam solutions as well as in water desalination”, notes Divakaran.

For future CSP projects, Somani suggests that a minimum timeframe of 36 months for completion should be allowed, adding that the industry shouldn’t wait for the results of Phase One as important lessons from this phase are now known, projects are progressing, and developers are committed.

To comment on this article write to the editor, Jennifer Muirhead