Saudi Arabia has raised the bar for its renewable energy program, taking its target from the previously announced 41GW to an even more ambitious 54GW by 2032. 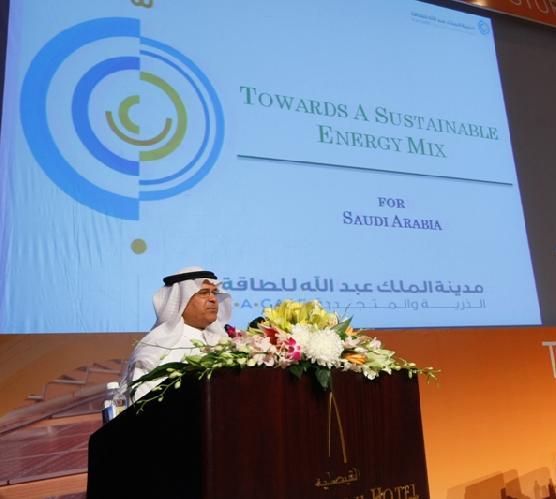 The kingdom has now taken action by formulating a preliminary procurement process for industry feedback. What can CSP developers expect in terms of challenges and incentives?

Saudi Arabia’s long-awaited Competitive Procurement Process (CPP) for the country’s national renewable energy program was released by the King Abdullah City for Atomic and Renewable Energy (K.A.CARE) on 20th February, 2013, inviting developer feedback and comments on the White Paper by 5th April, 2013. In conjunction with the CPP, K.A.CARE also launched an interactive portal through which potential bidders can register and eventually submit project proposals, which will be evaluated according to price and non-price factors.

As the largest solar association in the Middle East, Emirates Solar Industry Association (ESIA) has been assisting K.A.CARE in making the Saudi solar program a resounding success. “Our goal is to promote the expansion of solar power in the UAE and across the Middle East. We have worked on a policy level and on a technology level with the authorities in Abu Dhabi and Dubai, and we hope to use the best practices drawn from our public-private partnerships in the UAE and offer them to K.A.CARE”, Vahid Fotuhi, President of the ESIA, tells CSP Today.

“We will also support our sister organization, Saudi Arabia Solar Industries Association (SASIA), in fostering the grass-roots participation of local champions who will be key in giving life to K.A.CARE’s ambitious solar programs”, he adds. Still under development, K.A.CARE’s CPP highlights eligible technologies and project sizes, procurement targets, and payment mechanisms, as well as other major considerations related to local content and job creation.

A generous period of six months will initially be given for proposal preparations in the introductory round, although in subsequent procurements, a shorter period of time will be allotted. Moreover, prior to each round, qualified developers will be able to review and comment on draft RFPs and the terms of the PPAs, and K.A.CARE/SEPC may consider using this feedback in finalizing the documents.

Initially, K.A.CARE will establish the initial framework for the CPP, identifying targets, capacities and eligible technologies for each round. Following that, a separate stand-alone government-guaranteed entity, named as the Sustainable Energy Procurement Company (SEPC) will take over the responsibility of administering the procurement and executing the Power Purchase Agreements (PPAs).

The CPP will start off with an introductory round comprising five to seven projects of varying technologies at pre-packaged sites. These sites will be offered to bidders at locations that can be easily connected to the grid. After this 9-12 month process culminating in the selection of the introductory round winners, the first full-scale procurement round will commence.

The first phase will target 900MW of CSP, and the second 1,200MW. For any project to be eligible, a minimum capacity of 5MW per round will be required, although smaller projects that aggregate up to 5MW or more will be eligible to participate, provided they have a single common metering point.

To satisfy experience requirements, developers must have planned and constructed at least one renewable energy facility of a similar size and technology to the one being proposed. Saudi experience, however, will earn additional points, especially if this experience was in power generation projects.

Achieving commercial operation within two years from the execution of a PPA is another mandatory criterion, although for pre-packaged sites, the deadline for commercial operation will be 18 months only. Rather than incur a cash penalty, developers failing to meet the commercial operation date in the PPA will face liquidated damages, which will be applied by shortening the term of the PPA by three days for every day the project is delayed.

Under the PPA, power suppliers (the awarded developers) will receive 240 consecutive monthly payments, over 20 years, based on the total amount of metered electricity. When it comes to site selection, developers - with the exception of bidders on pre-packaged sites – will have to provide evidence that they have control of the chosen land for at least 180 days after the end of the contract term.

One of the guiding principles of the CPP is that projects will be evaluated inclusive of incremental transmission costs, and developers are expected to calculate the total of these costs over the life the project and add them on their bids. An exception to this is pre-approved zones, which allow developers to make preliminary assessments on the overall impact of their project to the transmission grid.

In the case of solar thermal projects, at least one month worth of radiation data using terrestrial measurements or three months of satellite-based radiation data will have to be shown to meet the resource assessment criteria. Alternatively, CSP developers may rely upon data from a tower site with similar meteorological conditions, but they must confirm so in writing by a qualified meteorologist. This will not be required if the developer was utilizing one of the pre-packaged sites.

During the introductory round, CSP plants will be required to provide a minimum of four hours of storage, and this may increase in subsequent rounds. CSP proposals with higher storage capacity will generally be favored over other proposals that are priced equivalently.

Meanwhile, CSP developers integrating local content provisions into their proposals will receive higher points during evaluation, given that the introductory round and round one will call for 60% local content and phase two 70%. Although the method for calculating allowable local expense is yet to be defined in the RFP and PPA, in all cases, the allowable local expense will equal the total cost of a service or equipment purchased from a SESC-approved establishment, multiplied by its respective local content factor.

For example, CSP developers using parabolic trough or power tower technology will be expected to source 50% of their engineering and legal services, construction labour and management, collectors, heliostats, mirrors and absorbers locally. On the other hand, molten salts, steam turbine and generators, receivers, and storage tanks will have to be sourced 100% locally. However, these minimum content and service levels will be introduced gradually; as the solar power industry matures in the kingdom.

“Saudi Arabia is blessed with lots of resources and know-how. A lot of the consumables across the Middle East are already produced in Saudi Arabia. So why not extend this to solar systems? Given the projected size of the Saudi solar market, I am confident that the manufacturers who are serious about this sector will invest in developing the local content to not only compete but also excel in these upcoming procurement rounds”, notes Fotuhi. The kingdom already benefits from a local industry base for some of the main inputs in CSP installations, such as glass, aluminum, steel, and cement.

Although Fresnel and Dish technologies were not included at this stage of the process, an informed source told CSP Today that the program is and will always remain open to all potential solar technologies.

Saudization is a national policy enforced by the kingdom to promote employment of Saudi nationals in the private sector, and it applies to all industries including renewable energy. Building a national capacity – through job localization and training – constitutes an obligatory and permanent component of the CPP, and developers will be required to submit a training plan as part of their bid and overall budget, specifying training expenditures during construction and start-up.

In fact, training will be so important to the extent that K.A.CARE will be establishing within the SESC a Developer Training Advisory Council (DTAC), to be led by five individuals that developers nominate from their companies. In addition, developers will be required to respond to questionnaires regarding training needs, and DTAC will meet twice annually to review these needs and make recommendations for improvements.

“We are seeing other industrial sectors struggling to meet the Saudi local manpower requirements. This problem is rooted in the education and training standards of Saudi Arabia. In order to compete with an international labor force the authorities need to ensure that the young people of Saudi Arabia are equipped with the skills needed to compete on an international level.

“This will require deep-rooted changes. I believe the Ministry of Education is aware of this training gap and are taking steps to tackle it. Their success will determine the success of K.A.CARE in creating jobs that will be held by Saudi nationals”, Fotuhi highlights.

Financial contributions towards training will also be obligatory. Commencing with the introductory round, developers will have to factor into their bids a 1% charge on gross revenues to be paid into a Sustainable Energy Training Fund (SETF), administered by SESC.

This fund will be mutually beneficial: while money from the SETF will be used to support energy training programs across the kingdom, developers holding PPAs from SEPC and whose projects have been in operation for more than three years can apply to SETF for grants to train Saudis in skills relevant to their projects. These grants will be evaluated on a quarterly basis.

After two years of operating under a PPA from SEPC, all developers will be required to submit a job localization plan, which will be updated annually thereafter. This plan should include a compliance report stating total employees, total Saudi employees, total wages paid and total wages paid to Saudis. Based on these reports, developers will be benchmarked by technology regarding the extent of job localization achieved.

Another entity that will be established within the SESC is the Developer Research Advisory Council (DRAC). Following a similar set-up process to DTAC, DRAC will be led by five individuals that developers nominate from their companies. DRAC will sponsor an annual Sustainable Energy Research Conference, and award prizes for the most effective sustainable energy research projects completed in the previous year.

Competition in Saudi Arabia’s upcoming CSP bids is expected to be fierce, considering that since K.A.CARE’s program was announced in 2010, it has attracted interest from CSP companies worldwide, including Abengoa, Siemens, Novatec Solar, ACWA Power, Sky Fuel, Masdar, and Solar Reserve, to name a few.

Over the next month, K.A.CARE will be receiving feedback from developers on its proposed CPP, after which it will issue the RFP and PPA draft for comment, and hold technical bidder workshops. Within 10 months from now, winners will be selected and contracts signed, and in 12 months, Saudi Arabia should be preparing for its next procurement round.