Abengoa’s exit from the Shams 1 plant will be followed by other global asset sales but highly competitive developers are set to fill any gaps left in fast-growing Middle East and North Africa markets. 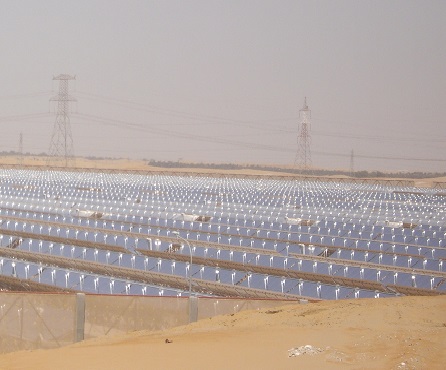 Abengoa developed the UAE's Shams 1 plant with partners Total and Masdar as it pursued global growth.

The vertically integrated CSP developer announced February 4 the sale of its 20% stake in the 100 MW Shams 1 plant in Abu Dhabi, United Arab Emirates, to plant partners Total and Masdar.

The sale forms part of a program of disinvestments by Abengoa aimed at avoiding bankruptcy and significant strategic selloffs are expected. Struggling with debt, Abengoa cut its full-year targets in early 2015 and stepped-up asset sales, but share prices plummeted in the second half of the year and the company filed for creditor protection on November 25.

The Seville-based group urgently needs around 300 million euros ($334.4 million) of liquidity before the end of March to pay operating costs such as wages for its 24,000 employees, sources close to the company told Reuters.

Abengoa said February 4 it had received offers worth more than 100 million euros for its non-strategic assets and expected to close further transactions within days.

“We are committed to transforming the business in order to adapt to the changing
environment, while keeping characteristic aspects of the company like cutting- edge technology and innovation which have defined Abengoa since its very beginning,” Jose Dominguez Abascal, chairman of Abengoa, said.

As the only vertically integrated developer in the CSP industry and with the largest portfolio of solar thermal projects - 1.6 GW in operation and 694 MW under construction – Abengoa’s struggle for survival has shaken the global CSP community.

The Spanish energy giant played a significant role in advancing CSP technology. In the Middle East and North Africa (MENA), Abengoa is credited for constructing the world’s first Integrated Solar Combined Cycle (ISCC) power plants in Algeria and Morocco. The company was part of the consortium that built the Shams 1 plant in 2013 and in 2014 it was one of three consortiums selected by MASEN to bid for Noor II and Noor III in Morocco, both eventually awarded to Saudi Arabia's ACWA Power.

In early 2015, Abengoa was chosen by Advanced Water Technology to jointly build the world’s first large-scale solar powered desalination plant in Saudi Arabia and in summer 2015 it signed a Memorandum of Understanding with the Egyptian government to cooperate on CSP and PV development.

While any reduction in Abengoa’s activities would clearly impact some of the firm’s partners, Imtiaz Mahtab, president of the Middle East Solar Industry Association, said other global developers should be able to ensure new projects are commissioned.

“I believe other turnkey developers such as ACWA Power, SolarReserve, and BrightSource Energy would fill the void,” Mahtab said.

The tenders for the Noor plants initially attracted Abengoa, US’ SolarReserve and BrightSource, all which manufacture proprietary CSP technology, as well as France’s EDF, Engie’s International Power and UAE’s Masdar.

Mahtab said the market should continue to remain competitive, even if there is less involvement by Abengoa.

“As the region is becoming more technology agnostic, all solar technologies have to be competitive to stay relevant,” he said.

“Since the levelized cost of electricity from CSP is three times higher than PV, CSP turnkey developers will not try to keep the price up even if there were less players. A recent example is ACWA Power’s win in Morocco, where pricing was around 15 US cents[/kWh] with the potential to go even lower,” Mahtab said.

Saudi Arabia, on the other hand, chose to rely on international contractors for the construction of its first ISCC projects; awarding Spain’s INITEC Energia the contract for Duba-1 and U.S conglomerate GE the contract for Waad Al-Shamal.

Hit by Spain's slashing of renewable energy subsidies, Abengoa has pursued a global expansion strategy. The company posted group revenues of 7.2 billion euros in 2014, of which 76% came from outside Europe. North America represented 32%, South America 30%, Africa 9% and Middle East & Asia 5%.

Under its business viability plan, presented by advisors Alvarez & Marsal and Lazard, Abengoa needs to reduce revenue levels in the coming years to about two-thirds of those reached in 2014, according to a Reuters report. The company is looking to cut its debt to around 3 billion euros from the current 8.9 billion euros, the report said.

Abengoa reduced its stake in Abengoa Yield by 15% in 2015, sold several CSP plants to the yieldco and it has already sold offices in Madrid to meet creditors’ demands.

In early December, Reuters reported that Abengoa was stopping work on its Brazilian projects and was in discussions to sell or find partners for those projects. Other reports claimed that the company will restructure its business in Chile as part of the negotiation process with creditors and Abengoa Mexico would not make its interest payments on two short-term bond issues in the local market.

According to a report by Bloomberg, Abengoa is likely retain its solar technology and development business unit Abengoa Solar, and Abengoa Water, to preserve ownership of its technology and gain higher profit margins when developing projects.

“From an operational perspective, the company will develop its business focusing on engineering and construction with or without proprietary technology,” Abengoa said in a statement on January 25.

The tough debt level requirements laid out in the business viability plan could limit Abengoa’s ability to secure funding and participate in projects. Less involvement by the virtually integrated developer could pave the way for other players to compete and subcontract smaller service providers.

As Abengoa refocuses its business around core activities after years of global expansion, the CSP industry has a sufficient number of competent developers who can step in and competitively bid for projects.