The establishment of local companies usually comes as a reaction to the emergence of a domestic market. And in the Middle East and North Africa, CSP is slowly transitioning to a large-scale market in terms of commission and capacity. 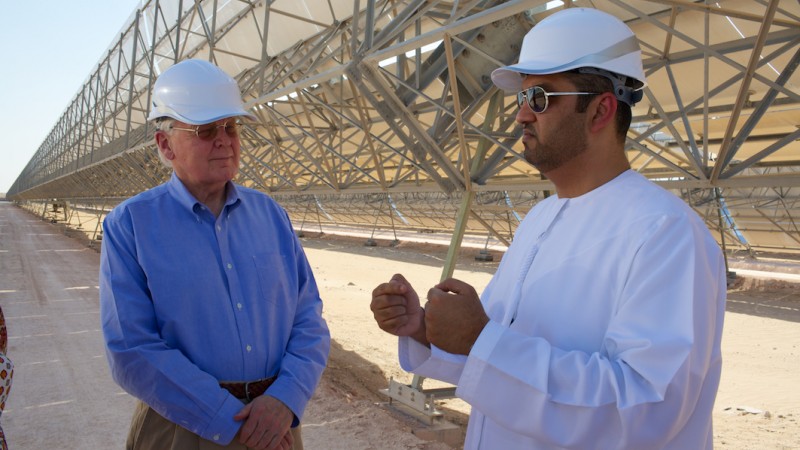 How can local content help foreign companies secure CSP projects in this region, and what benefit has it given developers so far?

Opportunity not a burden

In a region where CSP has massive potential, and where ACWA Power recently won a $1 billion contract to build a 160MW CSP plant near Morocco’s Quarzazat, the localization of contents and services is being highlighted as an opportunity to bring down costs, rather than a burden or challenge.

“As a rule of thumb in any CSP project, 50% of the work is related to non-equipment. This can be done through qualified local contractors inside the country, and we did it for the first time in Morocco with almost 42% local content. While there was no clear obligation to do it, we found that this gave us a competitiveness in reducing the tariff further”, says Bander Allaf, senior business development manager at ACWA Power, winner of the 160MW CSP project deal in Morocco.

“When we say that we want to approach the client with the lowest possible tariff, that means we need to look at every single component of the cost, and we don’t consider the localization of these components as a burden, we look at it as an opportunity in order to bring down the tariff more and more”, says Allaf.

In Morocco, ACWA Power has a zero advantage, since it is developing a project in a place that isn’t its home country. But localization gave the independent power producer the opportunity to further reduce the tariff.

“In this project, we localized 40%, and we’re quite sure that tomorrow we can also do it in Saudi Arabia, with qualified Saudi contractors inside the country. For the non-equipment part of the component, we can easily achieve 60-65%, and similarly in the UAE”, Allaf tells CSP Today, stressing that the most important element is to create a market and establish a pipeline of projects that will push all stakeholders to put local content as one of their advantages to bring down the prices.

It’s not just the components, however. A large percentage of ‘local content’ could be achieved through operations and maintenance activity, civil work, steel structure, and storage tanks that can be produced inside the country.

“Most manufacturers think that in order to meet the local content requirement they should come tomorrow and open a factory in Saudi Arabia for example, to produce modules. While on the other hand, there a lot of activities to be done locally and that can be done from the first project, without even starting a manufacturing facility in the country that you are targeting”, Allaf explains.

When it comes to localizing content for solar heating projects, no one does it better in the region than Millennium Energy. Founded by an academic about 10 years ago, who found it possible to engineer and implement complex solar heating systems to do more than just water heating, the company has since filed several patents in solar cooling, solar air-water systems, solar distillation and CSP.

“When we came into Millennium as a private equity fund in 2007, we saw the potential for industrial, commercial solar heating projects and we also liked the research and development on the cooling and now on the desalination technology”, says Ennis Rimawi, chairman of Millennium Energy Industries and managing partner at Capitalists Private Equity.
“We found that in a market like Jordan, where the company was based, solar heating was commercially viable without government incentives, so we weren’t dependent on government policy to help us create a market. Today our offices are in Abu Dhabi, Riyadh, Ramallah, and Chile”.

Millennium, which is currently commercializing its technologies, constructed the world’s biggest large-scale solar heating project: a $14million, 25MW-thermal project in Riyadh for the Princess Noura University that came online in April 2012. The Jordanian company found that in any solar heating project, about 50% of could be done locally. This includes installation, label work, local procurement, and the fabrication of storage tanks.

Having invested in Chile recently, Millennium’s plan was to carefully identify a ripe market before making its move. “The basis of that investment was that we took a step back and looked at (potential) markets for very large-scale solar heating systems. Chile is probably one the top markets in the world. We started receiving invitations from copper and mining companies to bid on such projects

Thus, there was activity in an area that had a significant advantage for the company, and that was very large-scale solar heating projects. It was clear; we studied the market, the top 20 potential clients that can each be the size of our Princess Noura project, and found there was a 500MW thermal market for us (in Chile), so as a result, we made the investment”, explains Rimawi.

Not everyone agrees that local content is the answer. Vahid Fotuhi, president of the Emirates Solar Industry Association, and former regional director for BP Solar Middle East, believes that while there are positive aspects in terms of empowering local content, there are hurdles as well.

“Because effectively you are distorting the market and putting restrictions on where you can supply the various components, sometimes that is not the best solution because whilst it may enable to you to work with local partners, at times, particularly in emerging markets, there is no local market. So you are either forced to work with a sub-qualified contractor or forced to pay a premium for that service, in which case, your goal to deliver low-cost electricity is compromised by having to pay a premium”, Fotuhi explains.

Saudi Arabia, which is preparing to launch its first CSP bidding round with 900MW in early 2013, is looking to bring a local mandatory requirement into the market. Although this wouldn’t be applicable in round one, it could be enforced later on.

An outlook of two scenarios

Fotuhi believes the outlook for CSP growth in the MENA could be one of two scenarios. The conservative scenario suggests that the internal political struggles that took place in the past will continue and evolve in a way that there will be modest growth year on year and that there would be almost no major project this year – maybe a few in 2014, and in best case, 100MW to 500MW over the next few years. This, according to Fotuhi, is because the infrastructure and political mindset very much caters to conventional power and fuels, and the appetite is not yet strong enough to switch.

“The more optimistic view is to say that Saudi Arabia has finally woken up, they finally understand the massive burden and cost that their current fuel structure has on them, that importing 2-3 million tons of diesel – which they do now – is not sustainable and is costing them a fortune, and they will aggressively push the agenda for renewables”.

To comment on this article write to the editor, Jennifer Muirhead