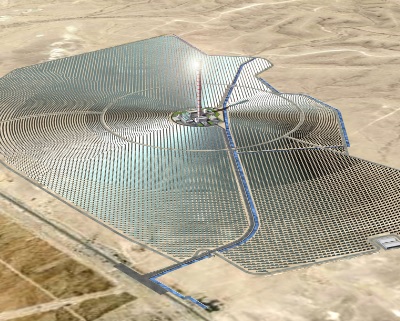 Gadot’s comments come a month after Megalim, developer of Ashalim Plot B, said it is in talks with the government to expand the 121 MW Ashalim Plot B plant with an enlarged solar field and a second tower. The proposed tower would host a molten salt receiver, allowing up to five hours of thermal energy storage.

“We call the proposed expansion Ashalim +…It will increase the electricity supplied by Ashalim Plot B by up to 50% and it will improve the plant’s competitiveness and reliability,” Eran Gartner, CEO of Megalim, told CSP Today.

Israel’s direct normal irradiance of around 2,500 kWh/m2/year is comparable to that of southern Spain, Greece and many parts of the US and Latin America, yet only one CSP plant with 6 MW capacity is currently operational.

Built in 2008 at BrightSource’s Solar Energy Development Centre, the 6 MW CSP project was meant to demonstrate the company’s proprietary technology, comprising a 60-meter tall tower surrounded by more than 1,600 heliostats.

Today a much larger and advanced version of this plant is being built. Undertaken by Megalim Solar Power, an investment partnership between Noy Fund, BrightSource and Alstom, the 121 MW Ashalim Plot B will consist of a 240-meter solar tower surrounded by 50,000 heliostats.

The Build-Operate-Transfer facility, which started construction last month, is part of the larger Ashalim solar complex, which includes two CSP projects – Ashalim Plot A and B – as well as a PV power plant.

“Plot B in Ashalim is just the beginning of what will become a technological and commercial success story in the area,” Eran Gartner told CSP Today.

“The three solar facilities in Ashalim will generate 270 MW at peak or 2% of the installed electricity production capacity of Israel. Once operational, they will supply roughly 1% of the annual electricity consumed in the country.”

The second CSP project at the site, Ashalim A, is a 125 MW parabolic trough plant with four-hours of thermal energy storage. It is being developed by Negev Energy, a joint venture between Shikun & Binui and Abengoa.

Megalim is one of the few CSP developers that has mid-term plans in the Israel market, having started negotiations with the government to extend Ashalim Plot B with an enlarged solar field and a second tower with molten salt storage.

Despite the recent progress made in the Ashalim solar complex, Israel remains a very limited market for the CSP industry, Oren Gadot, Chief Executive Officer of Heliofocus said.

Indeed, the Ashalim Plot B is the only CSP plant that is under construction in Israel at present, while 137 MW are under development and 126 MW are in planning, based on data from the CSP Today Global Tracker.

Government bidding for the Ashalim solar complex started back in 2006 and the first 121MW configuration is expected to become operational in 2017.

In Israel, nearly 13,000 km² of land is defined as desert areas Israel with potentially viable solar irradiation levels, Gadot said. However, much of this land is dedicated to natural reserves, agriculture land, mining and other industrial activities in addition to forests and urban areas.

This, according to Gadot, leaves about 120km² of land for CSP applications, the majority of which are scattered and not necessarily in the right locations for the best rate of return for CSP developers.

Deterred by the lengthy process

Any developer eyeing a CSP project in the country will most likely need to go through a very long process of land conversion in order to get the right land size with the right radiation levels for that project, Gadot said.

“Such a process can take many years and involve a huge amount of regulatory efforts – a process that most CSP companies in Israel cannot withstand financially,” he said.

Heliofocus started its activity in Israel in 2008 with an R&D centre. It is developing the 0.5 MW HF Stardust 3 plant and the 12 MW CART Wheel CSP dish project, which is currently in the permitting process. The former is set to become the world’s first integration of CSP for direct high-pressure (530°C) steam injection into a combined cycle power plant. Obtaining the permit for Stardust, however, took almost three years.

Another challenge lies in the cost of CSP versus fossil fuels, especially after Israel’s discovery of the giant Leviathan natural gas field in 2009 which has some estimated 600 billion cubic metres of gas. Production from this field is due to start in 2017, and this should lead to considerable cost reductions in natural gas power generation.

These barriers have prompted Heliofocus, as well as other Israeli CSP developers such as Aora Solar, to turn their attention to other, more promising markets, such as China and Sub-Saharan Africa.

“Today, we have shifted our focus out of Israel since land permitting has created a huge burden for the company and we’re focusing on our R&D hub near Dimona [Israel], which has been operational for four years,” said Gadot.

“We are mainly engaged with projects in China as government support and the 12th five-year plan objectives are well supporting our efforts.”

Other CSP developers in Israel are having a difficult time getting their projects off the ground. For example, the 120 MW Shneur and 60 MW Mashabei and projects were first announced in 2010 and 2012 respectively, but both are still in the planning phase and the government has proposed changing the projects’ technology from parabolic trough to PV.

To top it all, current incentives for CSP in Israel are unclear. The Public Utility Authority (PUA) published its last thermo-solar regulation in 2013, which was for 2013-2014 but it has not updated it since then.

“The PUA’s approach to CSP is not in favour of the technology – they tend not to support CSP projects but promote PV – utility and distributed. Ashalim’s FIT rate was finally set to 79 Agorot /kWh in 2015 (20.6 US cents/kWh) – far from its original FIT discussions for 31 US cents/kWh.”

Nevertheless, the Israeli market possesses all the fundamental elements for CSP development – excellent solar resources, an experienced CSP industry and R&D base and a renewable energy target of 20% by 2020.

However, until the persisting challenges of constrained land availability, vague incentives, and lengthy permitting processes are addressed, CSP projects in the country will be limited to a very small number of developers.