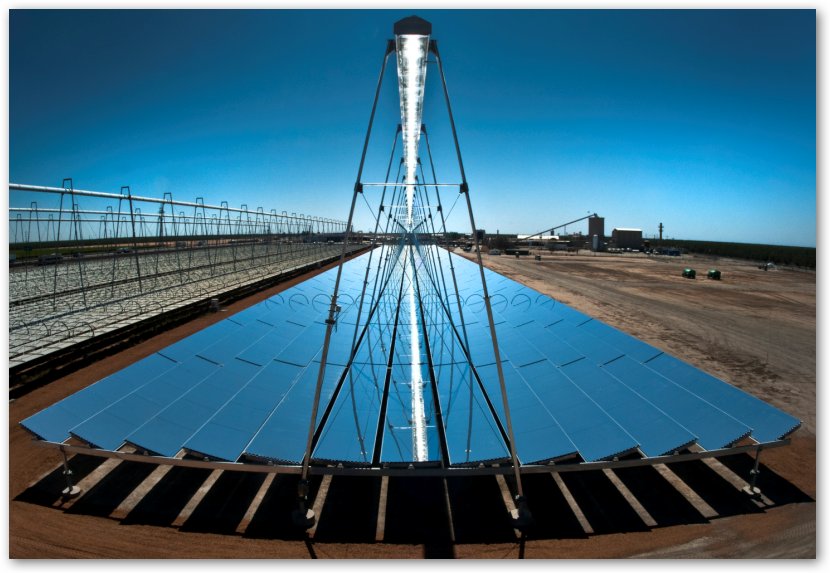 The 125 MW Reliance Areva plant is the largest Linear Fresnel Reflective (LFR) plant in the world.

It has now been a year since the 125 MW Reliance Areva plant, Asia’s largest Concentrated Solar Power plant, went into operation at Dhursar, Rajasthan. Reliance Power and EPC contractor Areva are continuing to focus on raising output to stable maximum levels.

Developed by Reliance subsidiary Rajasthan Sun Technique Energy, the plant is the largest Linear Fresnel Reflective (LFR) plant in the world, and is a key reference point for projects in India, and beyond.

The plant receives a tariff of INR 11.97/KWh ($0.18/KWh) under a 25 year Power Purchase Agreement, according to data from the National Renewable Energy Laboratory (NREL).

The plant started operating in November 2014 and was the third completed CSP project of seven awarded under the Jawaharlal Nehru National Solar Mission (JNNSM) targets, which set the ambitious target of deploying 20 GW of grid connected solar power by 2022. The other four CSP plants awarded under the JNNSM are in planning or construction phases.

There is no doubt that India has ambitious plans for solar power.

Finance Minister Arun Jaitley announced in February 2015 an increased renewable energy target of 175 GW by 2022, of which 100 GW would come from solar energy. Current installed solar capacity is 4 GW.

The 100 GW of new capacity includes 40 GW of rooftop solar PV and 60 MW of medium and large-scale projects.

India’s government announced In December 2014 the Scheme for Development of Solar Parks and Ultra Mega Solar Power Projects, targeting 25 solar parks by 2019, each with a capacity of 500 MW and above. It did not specify whether the focus would be on CSP or PV.

The intention of the scheme is to take away land risk for developers by designating the land for the parks before developers are invited to bid for projects.

As the first Fresnel plant to be built at such a scale, the Reliance Areva project encountered several challenges, including lower than predicted Direct Normal Irradiance (DNI) levels due to active monsoons and frequent passing cloud trains.

Estimates from NREL, used by India's Ministry of New and Renewable Energy (MNRE), predicted DNI of 2150–2260 kWh/m², according to Gopal Somani, CEO of Maheshwari Mines and Energy Private and former director at Rajasthan Renewable Energy Corporation. However, this dropped to 1850–1950 kWh/m² based on assessments made by Phase I developers.

In addition to the DNI revision, the project also had to deal with Areva's exit from the CSP industry.

Only 47.7 MW of Fresnel-based CSP plants are operational worldwide, besides the 125 MW Reliance Areva plant. Only one of these other projects exceeds 5 MW: Spain’s 30 MW Puerto Errado 2 plant.

“Since this is the first time LFR technology is being deployed at such a large scale, the technology versus the practical challenges for the plant are under observation,” Chetan Pathak, Assistant Manager, Solar Business Development at Reliance Power, told CSP Today.

The current power capacity of the plant is 100 MW, and there is a reserve margin of 25 MW to meet the 25-year PPA obligations.

The plant is still in a stabilisation phase, Pathak said.
“Reliance and Areva, the appointed EPC contractor, are jointly making efforts to attain the maximum and full-fledged generation from the plant,” he said.

The warranty on the performance of the solar field obliges Areva to ensure the performance meets expectations for the first five years of production, and if this is not possible, to compensate the developer for the net present value of the revenue losses for the whole duration of the PPA, according to a report in 2014 by the San Giorgio group, part of the Climate Policy Initiative consultancy group.

The CSP industry is closely watching the progress of the plant to assess the performance of the Fresnel technology system, according to Somani.

“Reliance’s project is working well; however, CSP communities around the world are looking at it with different views,” he said.

“Some think Fresnel systems are not efficient enough to support full load operation, while others see nothing wrong with this type of technology.”

Gujarat Solar One on track

While three out of the seven CSP projects allocated under the JNNSM operations are in operation, four are yet to be commissioned and only one of these is in the construction phase.

There has been some recent progress on the 25 MW Gujarat Solar One plant, a parabolic trough CSP project undertaken by Cargo Power & Infrastructure which was initially scheduled to move into operation in the fourth quarter of 2013.

These land acquisition hurdles have recently been resolved, and the project moved into construction in October 2015 and is to be connected to the grid by March 2017.

The Indian government authorities are keen to see this project commissioned since it is the first CSP project with thermal storage in India, Kumar said.

There is no doubt that India’s CSP industry is going through a learning curve, as developers deploy technologies for the first time under India's weather conditions. A larger challenge, though, is PV’s rock-bottom prices in India.

In addition to the target of 20 GW of grid connected solar power by 2022, the JNNSM aims to achieve grid parity by the same year.

The issue for future CSP projects is that growing PV capacity is driving down the cost of PV to far below costs in the less active CSP market.

“The CSP market in India did not really pick up after the JNNSM Phase 1, Batch 1 (2012-2013 period). Most focus is on solar PV based installations,” said Pathak.

“The tariffs derived for solar bids in India touched a new low of INR 5.05/kWh ($0.07/kWh), which is significantly lower than the tariff attained by CSP, making the latter uncompetitive with solar PV technology,” Pathak said.

A 2014 case study by the San Giorgio Group estimates the LCOE for Reliance’s AREVA plant at INR 12.5/kWh, (USD 0.24/kWh, based on the exchange rate at the time of project’s financial closing –
USD=INR 52.6). This compares with a PPA tariff of INR 11.97/KWh, according to the NREL figures.

The consultancy also noted that the reserve capacity of 25 MW increases the probability
the plant meets PPA output requirements and has “the upside potential of selling excess power to a third party off-taker.”

As well as the price comparisons with PV, CSP developers have also had to contend with the competitive timelines being set for PV projects.

“For all solar bids, central or state government, only 12-15 months of execution time is being allowed for solar power developers,” noted Pathak.

“For CSP developers to abide by such stringent timelines is not achievable, especially for large-scale projects,” he said.

Since the first phase of CSP projects under the JNNSM, solar developments in India have focused on PV, with the exception of two 50 MW demonstration CSP projects announced by the Solar Energy Corporation of India (SECI) in 2013.

These projects were supposed to be tendered in 2014 and the CSP industry is awaiting clarity on the plans for the two demonstration projects, Somani said.

It is thought that the delays over the SECI projects are linked to the progress of the four CSP projects still in planning and construction phases, he said.

“This is considered necessary before setting up these projects to test the feasibility of CSP in India,” Somani said.

Kumar said that despite the competitive pressures from the PV market, successful CSP projects should provide a basis for growth.

“At this stage, the future of CSP is not looking good due the popularity of PV in India, but once our project is commissioned, I hope that authorities, developers, and bankers will start supporting projects like ours in a bigger way, because CSP storage is the only way forward for dispatchable power.”

For Somani, it is a matter of time before CSP takes off in the country, particularly as more of the ongoing JNNSM projects are completed. The entrance of Chinese supply companies in the CSP supply chain should also help drive down costs, he said.

“I’m optimistic about the Indian CSP market, which benefits from good solar resources and strong governmental backing. Three (JNNSM) projects have already achieved commissioning, proving the feasibility of CSP development of India and offering a reference for people who want to enter the market.”