It is no secret that inadequate DNI data severely hindered the initial batch of India’s NSM CSP projects. But today, with over 100 solar radiation measurement stations deployed and a national solar atlas underway, the Indian CSP industry can be optimistic about its future. 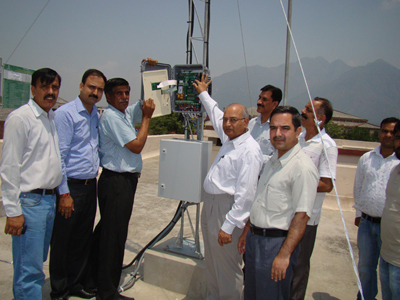 Shri Mata Vaishno Devi University inaugurating the SRRA station last June. More than 100 Solar Radiation Resource Assessment (SRRA) stations have been deployed across India to date, and more are planned to be installed. The ongoing project is being carrie

Only three years ago, India’s Direct Normal Irradiance (DNI) data was insufficient to meet developer and investor requirements. It lacked ground measurements and satellite data, and the few existing solar resource measurement stations were too far from the field to be accurate.

According to industry insiders, the NREL-DNI data of 2150-2260 kWh/m² dropped to nearly 1850-1950 kWh/m². Developers, misled by the data, incurred additional time and money in re-engineering solar field layouts and equipments to compensate for the lower DNI values.

Nevertheless, India’s DNI compares favourably even to some of the sunniest locations. For instance, a CSP-plant in Rajasthan, receiving DNI of 1950 kWh/m²/a, would deliver significantly more energy compared to a location in Spain with the same average DNI, as previously reported by CSP Today.

The CSP landscape in India has vastly changed today. Not only have developers become much more aware, but the MNRE has taken action through the Centre for Wind Energy Technology (C-WET) to overcome this major obstacle.

More than 100 Solar Radiation Resource Assessment (SRRA) stations have been deployed across India to date, and more are planned to be installed. The ongoing project is being carried out by C-WET, an autonomous institution of the MNRE, and supported by the Government of Germany through GIZ’s Solar Mapping and Monitoring (SolMap) project.

Each of the SRRA stations has been equipped with “state-of-art equipments and sensors for measuring solar radiation and associated weather parameters”, according to C-WET.

Some of the newest SRRA stations were recently set up at the School of Energy Management in Shri Mata Vaishno Devi University and at the Prathyusha Institute of Technology and Management in Tamil Nadu, where C-WET held a two-day training workshop on the functioning and maintenance of the stations.

After several years of deploying SRRAs, the program finally reached a peak last month when C-WET selected 3Tier through a global tender to create India’s first national solar atlas – a project that will cover information applicable to both CSP and PV technologies.

“The Solar Atlas will include monthly average spatial maps covering all of India and long-term hourly records (or time series) at 115 selected locations. This information will include both Global Horizontal Irradiance and Direct Normal Irradiance,” Nikhilesh Singh, Managing Director of 3Tier India, told CSP Today.

The time series records will also include wind speed and temperature, which are crucial data points for understanding CSP production. Most importantly, the information will make it possible to analyze and predict long-term trends to determine what year-over-year and month-over-month solar project performance risk will be.

“In India, one of the most powerful weather anomalies is the annual monsoon, which varies each year in its timing and strength across the country,” explains Singh.

“With long-term data to demonstrate where and how the monsoon has significantly impacted solar production in the past, stakeholders can make smarter investment decisions with a full understanding of the resource risks,” he adds.

According to Dr. G. Giridhar, director of the SRRA Mission Mode Project at C-WET, all information in the Solar Atlas will be regularly updated to include the most recent months and will be validated by C-WET’s SRRA stations that are spread across the country.

How will CSP benefit?

While an optimal CSP project site is defined by a number of factors, a strong solar resource, particularly where and when energy is most needed, is a key characteristic.

“The intensity and variability of the solar resource is the most sensitive driver of uncertainty in a project pro forma. Information from the Solar Atlas will fill critical information gaps in this respect,” Singh points out.

“On the transmission side, when a lot of generation is put in a single location, it requires adequate capacity to carry that energy where it is needed,” he says.

Some countries, like the U.S. and Morocco, have chosen to create renewable energy zones where they use information similar to that provided by the Solar Atlas to identify areas where renewable resources are particularly strong.

They then establish incentives to encourage development in these areas, such as additional transmission, roads, land permits and other necessary infrastructure.

These types of major investments, while very valuable, take years and billions of dollars to build, according to Singh. “Planning and funding them requires a complex understanding of when and where renewable resources are strongest and what their variability is”.

However, by overlaying renewable resource information with transmission lines, population, energy demand and other information, geographic information system analysts and planners can make decisions about future transmission and storage needs and investments.

Singh believes that “this same sort of policy planning could be undertaken in India and would be supported by the Solar Atlas”.

To respond to this article, please write to the author, Heba Hashem.