Desertec and Medgrid: Competitive or compatible?

CSP Today examines how two organisations aiming for the same goal can complement each others’ efforts. 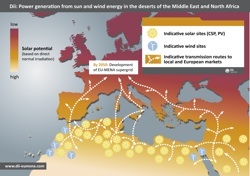 With similar visions, motives and targets, France-based Medgrid and Germany’s Desertec Industrial Initiative (Dii) appear to be heading towards the same direction, yet the two homogenous organisations are far from competitive.

Besides having a few shareholders in common- such as Siemens, Terna, REE and Abengoa - and working on feasibility studies, each of the two European foundations has a different role within the EU-MENA renewable energy mission.

In fact, the Dii and Medgrid must operate in parallel and exchange information regularly to avoid duplicate studies and wasted efforts. That said, however, both initiatives were officially established in recent years, and a tangible outcome is yet to be seen.

In the very long-term, Dii aims to satisfy up to 15% of European power demands and a substantial part of the MENA countries’ energy needs by 2050- when electricity and water requirements in the region are expected to have become as high as in Europe.

In the short-term, Dii will identify “reference projects” to demonstrate and prove the feasibility of the Desertec concept. This will be achieved by locating appropriate sites, conducting measurements and selecting the optimum technology mix.

Dii also intends to develop a roll-out plan by as early as 2012 to guide investors. Although it will neither make investments nor build power plants, the Dii will act as a facilitator and a driving force to enable joint renewable energy projects with Non-EU member states in the framework of the EU directive.

Being a non-profit foundation, the Dii’s approach is flexible when it comes to collaboration, as it welcomes political, institutional or industrial initiatives, including the Mediterranean Solar Plan (MSP), the World Bank’s Clean Technology Fund (CTF) and the Medgrid.

“Power transmission from North Africa to the European markets is, in addition to local distribution, a key element of the Desertec vision. For this reason, Dii welcomes the foundation of Medgrid, an initiative established by a group of French companies and other nationalities”, explains Paul Van Son, CEO of Dii.

While a number of its shareholders are German, Paul Van Son maintains that Dii is “very international”, being supported by companies from different countries in Europe, MENA, USA and Japan.

“The Medgrid is also an international organization”, he points out, adding that the CEOs of both initiatives (Paul Van Son and Georges de Montravel) have known each other for a long time and cooperated already successfully in other projects.

Backbone of the Supergrid

Formerly known as the Transgreen initiative, Paris-based Medgrid will focus specifically on transmission issues and the need for grids. It plans to complete a number of preliminary studies by 2013 and to assess the benefits of investing in HVDC technology to reach the final goal – the “super grid”.

Montravel outlines two main strategic directions for the power grid of the future, the high voltage super grids consisting of AC and DC, and the more intelligent smart grids. Besides complementing Dii’s activities, Medgrid will empower the entire movement, which seeks to create the conditions for many future plants rather than just build some plants for the time being.

Medgrid’s long-term objective is to install 20GW from renewable energy sources in the south and east of the Mediterranean Basin by 2020, with 5GW being devoted to exports for Europe.

“Whereas Dii focuses on the entire value chain of power generation, transmission, and power markets in MENA and partly EU up to 2050, Medgrid concentrates exclusively on transmission issues in the Mediterranean region up to 2020/2025”,  explains Paul Van Son.

Is the vision swimming into focus?

The Desertec vision is already becoming a reality with several projects underway. For example, a 200MW wind farm project along Egypt’s red sea has been granted a loan of €192 million last December, to contribute to the total costs of the project, estimated at €340 million.

The financing agreement was signed between German state bank KfW and Egypt, represented by the Central Bank and the New and Renewable Energy Authority in Egypt (NREA).

In 2009, the Moroccan government embarked on an ambitious 2,000MW solar program, which will account for 38% of the country’s power generation by 2020. The US$9 billion solar plan involves five solar power generation stations across the country, and has led to the establishment of MASEN (Moroccan Agency for Solar Energy).

A year later, Moroccan power utility ONE awarded Nareva, the energy arm of the country's biggest conglomerate ONA, a construction deal to build a 200MW wind farm. Today, more than 500 renewable energy projects across the region have direct or indirect relevance to the cross-continental projects

“It is obvious that Dii and Medgrid will bundle their resources and work in close cooperation with each other and for the long-term benefit of the entire EU- and MENA- communities”, concluded Paul Van Son.

To respond to this article, please write to:

Or write to the Editor: