Bidding for phase one of Kuwait’s Shagaya Multi-Technology Renewable Energy Park closed on 27 November, 2013, resulting in six shortlisted consortia for the EPC of the 50 MW Shagaya CSP plant. Who are these companies and how strong are their track records in CSP? 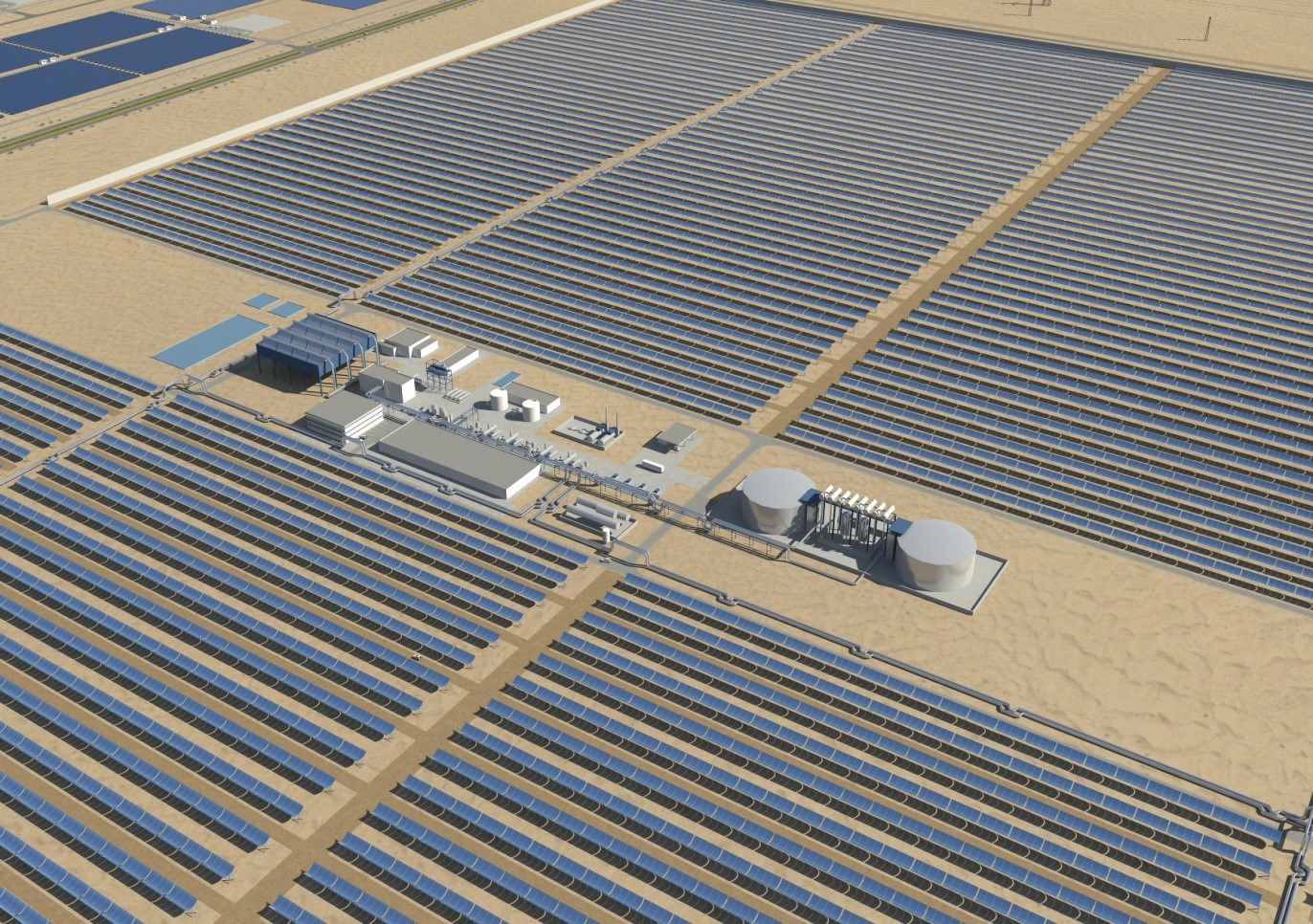 In June of last year, Kuwait Institute for Scientific Research (KISR) launched the bidding process for the Engineering, Procurement and Construction (EPC) of the 70 MW Shagaya RE Park Phase One, accepting proposals from prequalified groups.

Comprising 50 MW CSP, 10 MW solar PV and 10 MW wind energy plants, the project is expected to deliver up to 225,000 MWh to the grid every year upon completion in the first half of 2016. For the CSP plant, KISR opted for parabolic trough technology, with 10 hours of thermal energy storage (TES) using molten salt, and a dry cooling system to minimize water consumption.

Out of eight qualified CSP consortia, six are now shortlisted for the EPC of the 50 MW Shagaya CSP plant – five of which are led by Spanish contractors. This doesn’t come as a surprise considering Spain’s long-time leadership in the global CSP market.

The lowest bid was submitted by Spain’s engineering firm TSK Electronica Y Electricidad S.A. and Kuwait’s Kharafi National, although the quoted values will only be a secondary factor, an industry insider told CSP Today. “The first criteria will be technical compliance; once that is checked, then the determining criterion will be contract price.”

TSK expanded into the Middle East in 2010, with projects in Saudi Arabia, India and Bangladesh. The company has a long track record in the solar thermal sector, and is currently involved in the construction of the 50 MW Bokoport IPP in South Africa and the 160 MW Ouarzazate IPP in Morocco.

Like many Spanish CSP developers who have been aggressively expanding their overseas business, 95% of TSK’s work in 2013 was carried outside of Spain. But to further strengthen its technological leadership in the solar thermal sector, last November TSK announced its acquisition of German CSP manufacturer Flagsol, which developed the parabolic trough solar field technology for Spain’s Andasol and Egypt’s Kuarymat ISCC plant.

“With this operation, TSK positions itself in an enviable position in order to compete in the ambitious solar power plans announced by countries such as Saudi Arabia, Kuwait, Morocco, Oman, Qatar, UAE, among others who are also making a firm commitment to solar power,” the company said.

In Kuwait, TSK would work with Kharafi National, a Pan-Arabian infrastructure project developer that has taken several steps to get involved in the solar market, having established Kharafi National Ralos, a JV with Germany’s Ralos New Energy, in 2011.

The second bid for the Shagaya CSP Plant was proposed by Abengoa’s subsidiaries Abener and Teyma, two global pioneers that have worked on a number of large-scale projects, including Abu Dhabi’s 100 MW Shams 1. Abengoa’s portfolio comprises impressive projects, ranging from five solar complexes in Spain, to Solana – the largest parabolic trough plant in the world at 280 MWe and one that incorporates a six-hour TES capacity.

At present, Abengoa is constructing Mojave Solar Project, a 280 MW CSP plant that will come online in 2014, as well as two plants in South Africa. Working in partnership with Abengoa’s subsidiaries in Kuwait would be Bader Al-Mulla & Brothers Co., one of the largest engineering groups in the GCC region, which can take advantage of its expertise in electromechanical contracting, oil and gas, structural steel, piping and instrumentation in building the Shagaya CSP plant.

The third bid was made by Elecnor S.A., a Spanish infrastructure and EPC contractor that built three 50 MW thermoelectric plants in Spain, raising EUR 700 million through finance for their development. Elecnor would be teaming up with Al Ghanim International General Trading & Contracting Co., a Kuwaiti EPC contractor mainly working on power projects, with a portfolio accounting for nearly 30% of Kuwait’s installed capacity.

“Elecnor has the technical and financial capacity necessary to tackle the design, supply, construction, start-up, operation and maintenance of thermoelectric solar power plants based on parabolic cylinder collector technology,” the company states.

Cobra’s bid was made in partnership with United Gulf Enterprises General Trading & Contracting Co. (UGETCO), a Kuwaiti organization serving critical industries such as oil and gas, power and water, and infrastructure. According to UGETCO, the group is focused on “assisting international companies in executing projects using its local market knowledge and experience”.

Meanwhile, with its 65 years of experience, Larsen & Toubro Ltd (L&T), one of India’s largest construction organisations, made the fifth bid for the EPC of the Shagaya plant. L&T’s capabilities in CSP include fixed and tracker structure manufacturing as well as plant construction. The company was also a member of the IIT Mumbai-led consortium that built the 1 MW pilot CSP plant for India’s Ministry of New and Renewable Energy. In Kuwait, L&T would work with sister company L&T Kuwait Construction, a joint venture of L&T Ltd of India and Bader Al Mulla & Brothers Company of Kuwait.

The final bid was made by Spain’s Abantia Instalaciones. A Spanish EPC contractor for renewable energy plants, Abantia’s projects include two CSP plants in Spain, and the 22.5 MW Borges – the world’s first biomass-hybridized solar thermal facility, which it set up with Comsa Emte in a record time of 20 months. With headquarters in Qatar and Morocco, Abantia is already poised to take on projects in the MENA region.

Abantia’s local partner would be Burhan International Construction Co., a member of the multi-faceted Al-Wazan Trading and one of the biggest construction companies in Kuwait. Burhan undertakes projects related to infrastructure, water treatment and distribution networks, and has executed several projects for the Ministry of Electricity and Water. According to the group, Burhan is one of two companies classified by the Government of Kuwait as a “Grade-1 Contractor for infrastructure and building works”.

Being a pilot project, the construction of the Shagaya RE Park is meant to enable Kuwait to assess the performance of different renewable technologies under its climatic conditions, conduct technical and economic feasibility studies, and determine any deficiencies.

Although the official date has yet to be announced, the contract for the Shagaya CSP plant is expected to be awarded in the first quarter of 2014. But since the government-funded project is the first of a three-phased master plan proposed by KISR – and one that aims to raise the project’s capacity to 2,000 MW by 2030 – the potential is huge for the entire CSP industry.

To comment on this article write to the author, Heba Hashem.

Find out more about Kuwait’s prospects for CSP at the MENASOL conference, which takes place on May 6-7 in Dubai, and where experts from the Fraunhofer Institute for Solar Energy and Clean Energy Business Council will be sharing commercial and technical knowledge on the Kuwaiti CSP market.