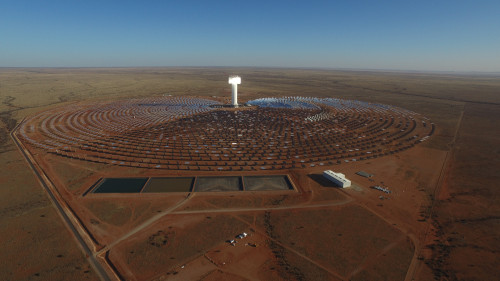 The EU-funded CSP2 project has delivered an innovative solution to overcome the limitations of current heat transfer fluids in concentrated solar power, which involves a combination of particles and gas instead of the liquids that are typically used.

By directing sunlight from a large surface towards a much smaller one, CSP plants can produce temperatures of more than 1000°C. However, better heat transfer fluids are needed to capture this bounty, according to project coordinator Gilles Flamant of France’s National Centre for Scientific Research.

Current transfer fluids are limited to 550 °C at best, whereas under the proposed approach, temperatures of 700 to 750 °C could be sustained, Flamant said. The partners, which include a number of private companies and academic institutions from across Europe, tested the proposed approach in a demonstrator whose performance confirmed the potential of their solution, he said.

“In a concentrated solar thermal power plant, solar energy is concentrated on a receiver by means of mirrors. The resulting heat is then converted into electricity by a turbine. Heat transfer fluid is used to transport the collected energy from the receiver to the converter,” says Flamant.

The heat transfer fluids are currently a limiting factor, both in terms of the heat they can absorb and in terms of performance, he said.

The solution proposed by CSP2 would boost conversion efficiency to well over 50%, according to Flamant. He said it would also eliminate a constraint of the molten salts that are widely used as heat transfer fluids: in contrast to these substances, the gas-suspended particles wouldn’t solidify at temperatures below 200 °C or so, obviating the need to keep the fluid warm.

The system carries no particular risk to the environment, Flamant notes; it is stable and affordable, and it can be controlled with great precision. It also supports one of the advantages that set CSP aside from various other technologies exploiting renewables: energy in the form of heat can be stored prior to conversion into electricity, which can thus be produced flexibly when it is needed.

For heat storage, Flamant explains, the gas would be extracted from the blend, leaving a packed layer of hot solids, and subsequently reinjected to create a flow of particles towards a heat exchanger. Various combinations of substances would be suitable, he adds, but CSP2 opted for silicon carbide particles suspended in air.

KaXu is a 100MW plant constructed on a 1,100ha site in north-western South Africa, a few kilometres from the Namibian border. It was named in the Financing for Climate Friendly Investment category as one of 19 "Lighthouse Activity of the Year" projects.

The KaXu project is one of the first group of renewable projects from a total of 28 announced by South Africa’s Department of Energy in 2011. It is also the first CSP plant in the country to use parabolic troughs. It launched in March 2015, and supplied energy to the equivalent of 80,000 homes and offsets 315,000 tons of carbon emissions each year.

Around $2.8 trillion will be invested in new solar power generation capacity worldwide to 2040, accounting for 27% of the $10.2 trillion in total investment in new power generation, Bloomberg New Energy Finance (BNEF) has predicted in its annual outlook.

Some 72% of investment will go to renewables, although investment in wind will grow faster than solar, with wind increasing 3.4% and solar 2.3% per year on average, BNEF said.

By 2040, BNEF expects solar will account for 34% of electricity generation worldwide, compared to just 5% today. Installed solar capacity will increase 14-fold, compared to a fourfold increase in wind capacity, it estimated.

The report did not detail how much of new solar capacity and investment would be attributed to CSP and how much to PV. But given the bullish prospects for solar in general, it would be safe to assume the predictions are positive for both sectors.

China will see an eight-fold increase in solar capacity by 2040, although coal will still account for 30% of its generation mix, BNEF predicted. India, too, will continue to use coal for power generation, but from 2030, solar will begin to sideline coal in that country, too, according to BNEF.