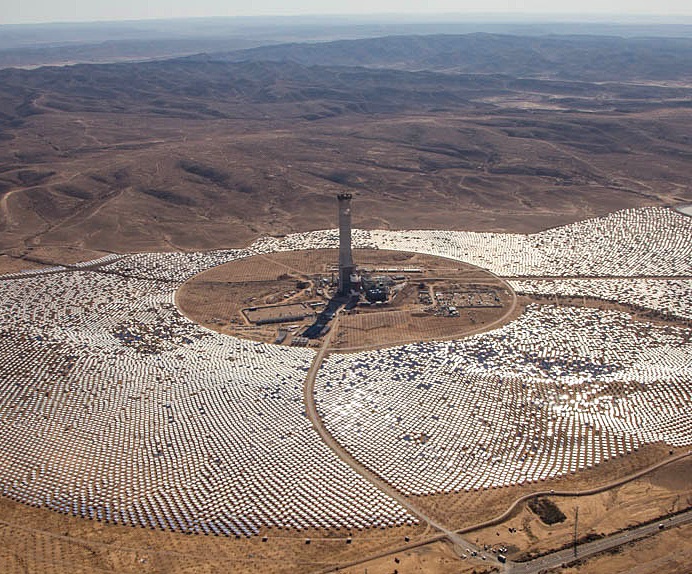 The estimated levelized cost of electricity (LCOE) of CSP plants fell from around $210/MWh in 2010 to $120/MWh in 2015, according to the U.S. Department of Energy’s SunShot initiative.

The SunShot initiative set an LCOE target of $60/MWh by 2020 and these cost reductions will require performance improvements to all subsystems within the CSP plant.

The Dubai Electricity and Water Authority (DEWA) aims to achieve costs of $80/MWh for its first CSP tower project, currently under tender.

While current installed CSP capacity is dominated by parabolic trough systems, data from the CSP Today Global Tracker shows that solar towers account for nearly half of global capacity under construction and 70% of projects under development.

Within three years, CSP technology with 7-8 hours of storage could be delivered at a cost “below 10 US cents/kWh [$100/MWh],” assuming 1.4 GW deployed in China and 1 to 2 GW deployed in the rest of the world, Paddy Padmanathan, ACWA Power’s President and CEO, told New Energy Update.

These cost reductions would be driven by technology innovations and price pressure from supply chain competition, Padmanathan said.

Competitive bidding is set to drive down prices in Dubai's latest tender. DEWA received 30 expressions of interest for its first CSP tower project, and "it is rumoured that five or six consortia have prequalified" for the tender, the Middle East Solar Industry Association said in a report last month.

Heliostat fields can represent up to 50% of the capital investment for CSP tower plants and new designs and assembly methods are cutting costs.

“Heliostats are a primary focus in the effort of decreasing costs. You can assemble them away from sites or use cheaper/lighter materials in design,” Parthiv Kurup, CSP cost and systems analyst at the National Renewable Energy Laboratory (NREL) told New Energy Update.

Developers can cut field labor costs by assembling heliostats in a factory and transporting them ready-made to site, rather than constructing them on site, he said.

“That’s coming from improved design, increased assembly before getting to the site, and increased learnings from the industry,” Kurup said.

SBP Sonne's Stellio heliostat is one of the latest examples of improved designs. A pentagonal shape reduces shading in the solar field and the system uses smart software to boost operational efficiency.

SBP Sonne estimates the Stellio heliostats could achieve a solar field cost of just 100 euros ($106) per square meter and an LCOE reduction of around 20% compared with the most competitive heliostat designs.

Software such as the NREL's SolTrace has allowed developers to model CSP systems and analyze their optical performance, Kurup noted.

“Developers are beginning to figure out much better the optimal amount of heliostats needed to meet the amount of energy they want –to have less heliostats on standby,” he said.

At the Ashalim Plot B CSP station in Israel, BrightSource Energy recently started using wireless solar field communications and control– a first for the CSP industry.

The control system is one of several fourth-generation solar field technologies that the developer deployed at the 121 MW solar tower, expected to enter operation in late 2017.

Each of the 50,600 heliostats positioned in Ashalim’s 3.15 square-kilometre solar field communicates wirelessly with the SFINCS, which has reduced the length of solar field cabling by as much as 85%, Rigney said.