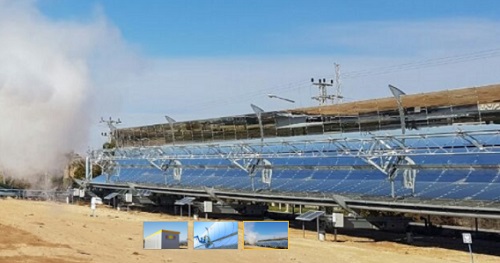 Project developer ACWA Power said Bokpoort set a new African record of 161 hours of continuous operations for a renewable plant back in March and has also achieved 100% of its base-case production expectations.

"With South Africa’s Integrated Resource Plan soon to be finalized, the future of CSP in South Africa should not be uncertain anymore, especially given the great success of Bokpoort CSP and similar plants across South Africa and other countries with similar rich solar resources," ACWA said.

Shouhang is heavily involved in CSP in China and abroad as both a developer of projects and as a provider of technology, components, and engineering, procurement and construction services.

Last year, it completed the 10 MW first phase at Dunhuang in Gansu province in western China, Asia’s first 24-hour-generation molten salt CSP power tower. It is now developing the second phase, a 100 MW molten salt tower, which is also one of the first batch of 20 CSP pilot projects approved by Chinese authorities. Construction on the second phase began in late 2016 and is scheduled for completion around mid-2018.

Shouhang is involved in other Chinese pilot projects, including the Delingha 50MW parabolic trough project, where it was awarded the mirror field EPC contract.

Brenmiller Energy raised $13 million in an initial public offering on the Tel Aviv Stock Exchange to make it to fifth on BNEF’s Q3 list. The company is developing two demonstration projects in Dimona in southern Israel. Rotem 1 is a 1.5 MW hybrid CSP-natural gas plant, and Rotem 2 is a 10 MW hybrid CSP-biomass biomass plant.

Several of the first phase of 20 Chinese pilot CSP plants have recorded progress in the past few weeks, according to news reports.

The site for Dahua Shangyi’s 50 MW tower project was confirmed by the local government in Zhangjiakou in Hebei province, close to Beijing. Project developer Dahua Engineering Management Corporation will open the bidding to contractors in January, and expects construction to begin in April 2018. Dahua Shangui is made up of 5,085 heliostats. It is equipped with six hours of heat storage and a designed generating capacity of 162 million kWh per year.

At Urad, some 95% of the field levelling work has been finished, according to reports. At Yumen, Royal Tech has opened the bidding for the oil-salt heat exchanger, and four Chinese companies have reportedly put forward proposals. The project is equipped with nine-hour molten salt thermal storage, and will reportedly become the first large-scale commercial CSP plant in the world to use a new-generation silicon oil as heat transfer fluid.