3D printing is key to new fractal-like concentrating solar power receivers that are claimed to be 20% more effective at absorbing sunlight than current technology. 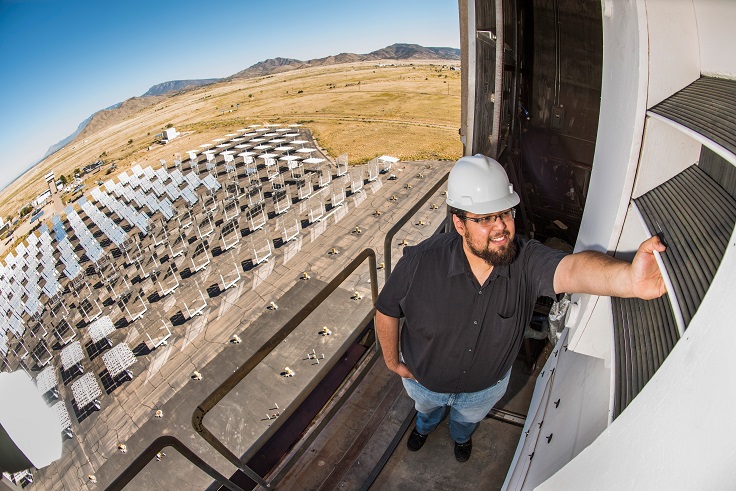 Sandia National Laboratories engineers designed the receivers as part of a Laboratory Directed Research & Development (LDRD) program backed by the US government. The findings are being applied to Sandia’s work for SERIIUS, the joint Solar Energy Research Institute for India and the United States.

While most concentrating solar power facilities throughout the world are large, India is interested in developing 1 MW or smaller facilities to provide power for small villages and communities. Improving the efficiency of these smaller receiver designs is a key step toward making that goal a reality.

Sandia engineers developed and tested the new receivers at the National Solar Thermal Testing Facility in Albuquerque, New Mexico. They studied the receivers’ ability to withstand high temperatures and pressures while absorbing sunlight as heat that can be stored or transferred to a power cycle to generate electricity.

Some previous attempts at improving the efficiency of solar receivers has focused on special coatings that are applied to the receiver. According to Sandia, many of these coatings are susceptible to breaking down over time, which reduces the ability of the receiver to absorb sunlight and the potential lifetime of the solar receiver itself while increasing costs due to reapplication and repair. Sandia says its new fractal-like receiver designs have increased solar absorption efficiency without the need for special coatings.

The Sandia team pioneered the use of a 3D printing technique called powder-bed fusion to print their small-scale receiver designs from Iconel 718, a high-temperature nickel alloy. For the high-temperature testing, they used both Inconel 718 and alumina. However, the alumina is white and not conducive to solar receivers unless it is painted or coated, Sandia engineer Cliff Ho told CSP Today.

Their claim of a 20% improvement was based on the increase in effective solar absorptance over the intrinsic material solar absorptance due to the novel geometric features that allowed light to be reflected toward other absorbing surfaces of the receiver, Ho said.

“The 3D printing allowed us to generate these complex geometries,” he said. “For the small prototypes that we constructed, we did not compare the cost with other traditional methods, which would have required extrusion, machining, and welding, but the cost of printing the one-of-a-kind prototypes was pretty expensive. We anticipate that for larger-scale, higher production components, the cost savings could be significant.”

Sandia sees 3D printing playing a role in not only solar thermal receivers, Ho said, “but other CSP components as well, including heliostat structures, heat exchangers, headers, valves, turbomachinery, and other components with complex features or geometries.”

Additive manufacturing is yet to play a part in commercial CSP projects. But Sandia’s achievement represents a significant step toward proving its worth to the manufacturing of receivers and other CSP-related equipment.

The proposed technology is based on the electronic (non-mechanical) steering of light over large ranges of direction, wavelength, polarization state and power by electronically modulating optical structures within a transparent medium between visible and invisible states. The technique is based on moving tiny amounts of optical fluids within a transparent medium to steer light. Giant Leap says this has the potential to completely replace the heliostats and parabolic trough concentrators used in today's utility-scale and small-scale solar power plants.

With its multi-billion-dollar research & development budget, Honeywell International subsidiary Sandia dwarfs startups like Giant Leap. But what the two have in common is that their goals are closely aligned with the national interest. The LDRD program invests in high-risk and potentially high-payoff activities carried out by Sandia National Laboratories in New Mexico, as well as the Lawrence Livermore National Laboratory and Los Alamos National Laboratory in California, that advance the frontiers of science and engineering. Sandia innovations typically find their way to eventual implementation in defence, energy and other important sectors.

For example, many years of LDRD investments in synthetic aperture radar (SAR) led to Sandia’s development of higher-resolution static images from a miniaturized package, miniSAR, deployed on unmanned aerial vehicles, advanced imaging of moving targets, and real-time video radar. SAR imagery has been obtained from NASA’s lunar orbiter. Such imagery has important applications for the battlefield, as well as nonproliferation efforts, according to Sandia.

Sandia is interested in having LDRD-developed technologies make it to market, although the LDRD program itself can only fund early-stage R&D, Sandia spokespeople confirmed to CSP Today. Other Sandia programs are able to support researchers such as Ho to identify an appropriate path and funding source to bring innovative technologies to market or insertion in government applications and programs, and there are a variety of ways in which Sandia works with industrial partners to commercialize technologies, they said.

No additional funding has been provided for the CSP project to work with commercial entities. However, given the track record of other innovations being brought to market, additive manufacturing could have a role to play in CSP and other renewable energy sectors in the coming years.