Innogy, the European energy company, has joined forces with Conjoule, the local energy marketplace, have announced that they will work together to build a system that allows prosumers and consumers to share renewable energy in Mülheim an der Ruhr, Germany. 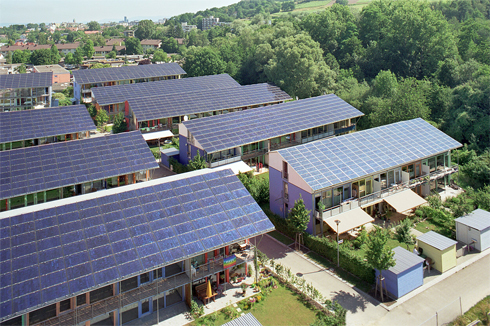 Innogy, the European energy company, has joined forces with Conjoule, the local energy marketplace, to announce that they will work together to build a system that allows prosumers and consumers to share renewable energy in Mülheim an der Ruhr, Germany.

Microgrids are gaining popularity in energy circles as they propose to create more independent, resilient and efficient energy grids by allowing energy to be consumed closer to the point of generation.

What's more, the local communities then get a greater choice over how they want their energy generated, namely green electricity, while securing cheaper rates for their neighbourhoods as they don't have to play in larger regional and national marketplaces.

In this case, the community network is supported by a smart meter installed with each producer and consumer to ensure that the flow of energy used is measured and billed in real-time.

This data is then fed into the Conjoule blockchain to ensure that all members of the system have full transparency over their own electricity needs and costs.

This, in turn, ensures that consumers have far greater transparency over energy billing than ever before, and prevents the typical challenge we all face when only the utilities appear, at least to the consumers, to monopolize this data and simply 'estimate' billing.

Therefore, the blockchain is not simply a solution for data management, but also in establishing and maintaining trust between producers and consumers.

So why do we need blockchain then?

However, this is just one part of this system. By deploying a 'microgrid', the community has effectively secured 1st refusal rights to the energy generated by the local private prosumers, instead of seeing the electricity generated next door being sold to the wider market.

Furthermore, should the community generate more energy than is needed, they will have full control over opportunities to sell the surplus to customers outside of their network.

On the flip side, they then have an agreement in place to buy green energy directly from the larger energy company Innogy if they cannot produce what is needed locally.

While this project offers an invaluable opportunity to see blockchain in action it does raise a few questions we should want to see answered before blockchain grids like this can become more mainstream.

First, with blockchain offering greater transparency over energy consumption, costs and revenue how will the community need to organize themselves in future?

Blockchain offers an incredible opportunity to limit the input and cost of 3rd party mediators by deploying smart contracts to automate the control and execution of supply, demand and payments between all three parties.

In practice though, who will the communities be able to turn to to help them secure the best deal in the first place?

The energy market is notoriously complicated so the community will surely need to establish their own energy companies anyway to create and support the microgrid long term? Is this really worth the effort in the long run?

What's more, without these community companies who will maintain the transmission and distribution network long term? How will this be financed?

Will such a small company even have access the best possible expertize and resources or just have to contract back out again to 3rd parties?

Furthermore, where do the Innogy's of the world sit in this system moving forwards if not merely as the developer?

If they also provide critical grid service functions supported by long-term agreements,   have we really changed the current market system to make it more competitive at all?

We can't take away the from the fact that this is an exciting project, but we must also be wary of just replacing one complicated system with another when blockchain offers us a real potential to unravel the traditionally messy grid and place more power in the hands of the consumer.

We're keen to hear what you think of the project, it's challenges and opportunities so get in touch at kerr@newenergyupdate.com to let us know what you think!