It takes 14.8 years before an idea for a drug becomes a prescription. Although compassionate use regulations, first introduced over 20 years ago, can halve the time from discovery to market, they’re rarely used even by patients who have come to the end of the road. 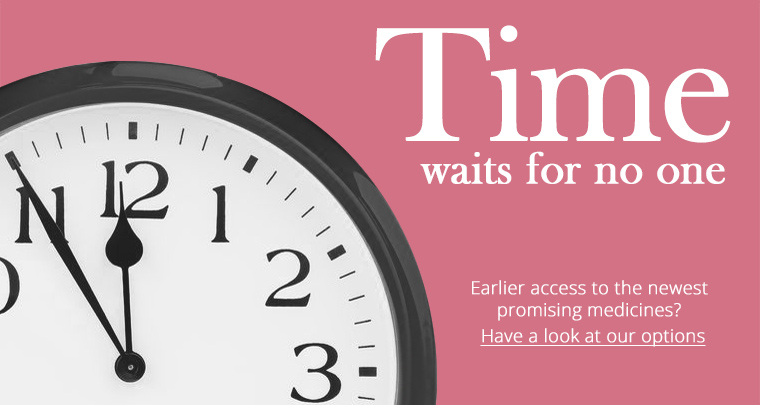 Compassionate use, also known as extended use, grants patients with lethal and debilitating disorders access to experimental drugs outside of a clinical trial, when approved therapies have been explored and failed to have an effect. When benefits outweigh risks, patients, in consultations with their physicians, can choose to apply for permission to take an experimental drug to be granted by an organization equivalent to the Food and Drug Administration (FDA) in a given country. But the law is not just about offering patients freedom of choice. It is also about ensuring that the industry is moving forward.

Because actual use is not well-documented, there are no numbers or statistics on how often it’s done, who’s doing it, or how well it’s working for patients, but according to Sjaak Vink, the Director of myTomorrows, an Amsterdam-based organization that supports patients and physicians in their pursuit of medication under early access, the legislation annually meets the needs of approximately 4000 patients in France, and about 100 individuals in the Netherlands. “That’s nothing,” Vink said. “Early access is very unknown and what’s unknown is unpopular. And that’s what we’re going to change,” he declared.

Worldwide, only 10% of patients with unmet medical needs are eligible to participate in clinical trials. In the Netherlands, for example, it means that 90,000 people are excluded due to their age or disease stage, or a number of other criteria defined by the study sponsor. On top of that, for many clinical trials are not an ideal solution, as 50% of patients enrolled are given placebo. Nevertheless, individuals who have been failed by standard therapies are keen on trying drugs that are yet to be approved. An explorative survey conducted by myTomorrows – which included patients from the UK, Australia, Europe and North America – revealed that 72% want to have the option to choose experimental treatments.

We’re at a tipping point. From Paris, through Barcelona, to San Francisco – all over the world we’re reaching a breaking point and patients and their loved ones demand a freedom of choice".

“It is about freedom of choice,” Vink said. “Patients don’t want to be patronized by the system or the physician. What we’re seeing right now is that the patient-base of more conservative physicians is shrinking if they are not willing to engage in a dialogue. Patients want advice. They want explanations. It’s a part of the patient empowerment movement we’ve been talking about for 20 years. Now it is finally happening. We’re at a tipping point. From Paris, through Barcelona, to San Francisco – all over the world we’re reaching a breaking point and patients and their loved ones demand a freedom of choice,” Vink stressed.

Early access provides that choice. Although few physicians and patients know about it, myTomorrows is striving to inform the society about what Vink calls a “beautiful, well-regulated opportunity.”

Before a drug can be prescribed, it must undergo an approval process, which involves extensive testing on animals before it can be tested on humans in clinical trials. The process is rigorous, expensive, and time-consuming. Only about five out of 5000 compounds discovered in the pre-clinical stage will make it through to the finish line.

Each time problems occur with a specific medication, we shout out loud to the politicians for more regulations. Safety is important, but should not result in rules, upon rules, upon rules, creating a system that is unbearable for [game-changing] innovations".

The complexity of the system is a response to public fear of big pharma, which dates back to the 1950’s, when Cutter Laboratories released a polio vaccine with a live virus. This was followed by the thalidomide crisis of 1957, and the norlutin disaster of 1975, among others, resulting in general distrust of the industry, and pressure on politicians to ensure that medicines are safe as soon as they reach the market.

Although the concerns are understandable from the point of view of the consumers, the stringent laws cripple innovation. “Each time problems occur with a specific medication, we shout out loud to the politicians for more regulations. Safety is important, but should not result in rules, upon rules, upon rules, creating a system that is unbearable for [game-changing] innovations,” Vink said.

The result of the current drug approval system is a 15-year wait for revolutionary treatments, meaning that medication that’s reaching patients now was conceived in 1999. “That’s before the dot-com bubble. That’s a very long time ago. That’s unacceptable,” Vink asserted. “I have a friend living in Berlin with A.L.S. The average life expectancy from the moment of diagnosis is three years. If you have life expectancy of three years it is really unacceptable that it takes 15 years for a new drug to become available to you.”

Some people think that what we do is rebellious, but it really isn’t. It’s just operates within existing regulations".

myTomorrows searches around the globe for novel drugs. As soon as there are trials that show good results, the organization gets in touch with the drug developer and asks them to cooperate on early access. Once the manufacturer agrees to work with myTomorrows, the drug is announced on their website, where it immediately catches media attention. “Some people think that what we do is rebellious, but it really isn’t. It’s just operates within existing regulations,” Vink admitted.

Each treatment is being rated by patients and physicians who are using it, and interested individuals can register for a particular therapy. Once registered, myTomorrows refers patients back to their physicians, who, if they decide to pursue an experimental therapy, need to sign up with the organization in order to receive detailed clinical information. “We’re not yet allowed to disclose all that to the patients, which is a shame, as we believe in transparency,” Vink said. The physician then discusses the option with his or her patients, and once the decision to pursue a given therapy is made, myTomorrows takes care of all the paperwork.

Unlike clinical trials, where the focus is on learning about the drug, early access is about showing compassion to a patient in need therefore companies have a legal right to ask for money in return for treatment. “Some manufacturers will, some won’t. If they ask for money, we’re asking them to keep it as affordable to as many patients as possible,” Vink said, adding that in some countries the medicines obtained via early access are reimbursable.

But affordability depends on the type of insurance one has, as well as on the type of disease. For example, in the Netherlands until recently some insurance companies were eager to pay for experimental treatment whereas others were skeptical. Now a pilot project is being launched in which insurers come together to cover the expenses associated with compassionate use.

Regarding treatments, cancer is the most expensive disease to deal with. Modern immunotherapies can cost up to £15,000 at cost price. “If it’s being insured, that’s no problem. Countries without possibilities for reimbursement should learn from the vanguards,” Vink pointed out.

Expecting companies to fund the scheme is not a suitable alternative, according to Vink, who fears that such a solution would thwart pharmaceutical progress. Already today, 85% of innovations submitted for an FDA approval come from small biotech companies, but in 58% of all cases, it is big pharma that owns the product.

“Small companies don’t have sufficient funds to keep going for 15 years, so after about seven years on the market, they’re forced to sell their idea, their product, or the entire company, to big pharma, who are spending billions each year without innovating,” Vink said.

To stop big pharma from “killing creativity,” Vink proposes a system of crowd funding. “If the companies receive funding from patients – the crowd – they can get more money from venture capital, who will be more willing to invest seeing that there is a market for a product, and thanks to that the small company doesn’t have to be sold to big pharma. That would bring a real change to the system,”Vink concluded.

Early access stands for freedom of choice for patient and innovation for the industry. Taking advantage of it in consultation with one’s physician can bring hope to the patients who have come to the end of the line, and it can ensure that the industry as a whole is moving forward.