Patients’ Week 2011: From patient to activist 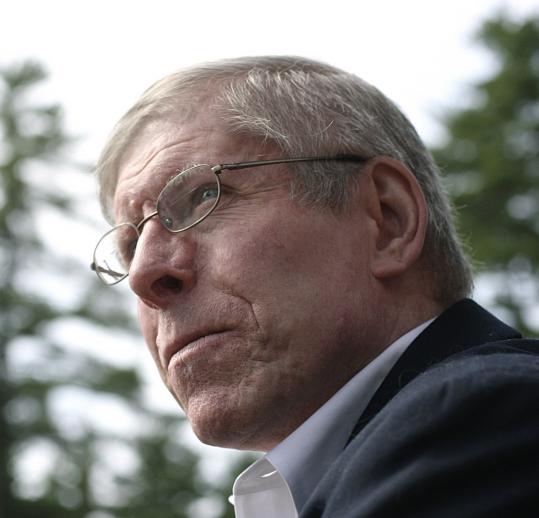 Before Dave deBronkart became “e-patient Dave”, a champion of the e-patient movement and a nationwide spokesman for electronic medical records and participatory medicine, he was just another patient, on his back in the middle of the night wondering what his mother’s face would look like on the day she buried her son.

He had recently been diagnosed with Stage IV, Grade 4 renal cell carcinoma, the most common form of kidney cancer.

Tumors festered in both his lungs as well as in several bones and muscle tissue.

Evaluating his condition online, he read that his median survival was 24 weeks.

“I woke up at one in the morning and wondered, ‘What am I doing sleeping? My life is ending,’” deBronkart remembers of that period in 2007.

Rather than wallow, he took as active approach to his health as he could.

He joined an online patient group, did extensive research about a clinical trial they recommended, and spoke openly with his physician at Boston’s Beth Israel Deaconess Medical Center, who encouraged him toward the trial despite its potential risks.

Within half a year of starting treatment on High Dosage Interleukin-2 (HDIL-2), deBronkart had beaten the disease and remains healthy to this day.

“I always say that ‘patient’ is not a third-person word,” he says.

“This is going to be real for you at some point in the future, maybe not next week, next month, next year, but this is headed for your life, so you really want to think about how the system works.”

From oblivion to Washington

Dave deBronkart’s rise to e-patient prominence in the past few years has been as rapid as it has been unexpected.

Over Thanksgiving break in 2007, with his cancer behind him and “nothing better to do,” he started blogging on a site called The New Life of Patient Dave.

“I started writing about anything I wanted to,” he says. “I didn’t have any plan.”

A few months later, his primary physician called his attention to the “e-patient whitepaper”, which described how patients can harness the Internet to better manage their own health and forge more productive partnerships with physicians.

That resonated with deBronkart and his recent trials, so he adopted the “e-Patient Dave” moniker.

Then, in April 2009, he wrote a blog post about posting his medical records on Google Health and how shocked he had been by the poor quality of the data that showed up. (Turned out they had used insurance billing data as a proxy for his clinical data, a common practice at the time).

Two weeks later, that post ended up on the front page of The Boston Globe.

Shortly thereafter he spoke at a conference, where he was greeted as a local celebrity.

A delegate from Washington, DC, was in attendance and returned to Capitol Hill recommending deBronkart as an ideal candidate to represent the consumer voice in debates about medical records.

By the end of the summer, he’d begun speaking at policy meetings in Washington.

“Without even realizing that uploading health data was an issue in Washington, I had stepped dead into the middle of a mud puddle and splashed every window in the neighborhood,” he says.

These days, deBronkart spends the majority of his time as a patient advocate and activist.

He’s written a book about his experience, Laugh, Sing and Eat Like a Pig: How an Empowered Patient Beat Stage IV Cancer (and What Healthcare Can Learn from It).

He regularly speaks at conferences around the country, where he highlights how the healthcare industry is in the midst of a paradigm shift, one in which patients are transforming from mere consumers of value to empowered individuals with a say in their own health.

The Internet has fueled this disruptive innovation, he argues, providing patients with access to one another and to streams of information from all corners of the world.

“Anyone who believes that [patients are still mere consumers] has blinders on and will get outraced by their competitors who have woken up,” he says.

Before cancer and his e-patient calling, deBronkart worked in the typesetting industry right as it was being eclipsed by the online revolution, which made fonts like Times New Roman, Courier, and Zapf Dingbats easily accessible to anyone with a word processor.

He says a similar thing is going on with healthcare now. “The distinguishing point here is that the dominant players in an established industry can lose track of what the consumer actually needs in the first place,” he says.

Figuring out how the pharmaceutical industry should respond to this shifting landscape is a difficult, “five-million-dollar” question, deBronkart concedes.

Then again, there are some obvious points to home in on.

“The trivial, superficial, but potentially useful response is to better understand the e-patient mind,” he says, “the engaged, empowered, enabled, activated, thinking mind who, whatever you say, may have connections with a hundred or a thousand other people like them.”

Whatever brand messages a company broadcasts these days will be double-checked with patient peers, just as whatever experience—positive or negative—patients have will be shared among larger patient groups.

“From here forward, it’s going to be harder to pull the wool over people’s eyes,” deBronkart says.

“The good news is—and the drug that I got is a great example—when you save somebody’s life with something, or really alter their circumstances or their kids’, they tend to be grateful and tell others.”

Pharma can take direct steps to create goodwill with patient groups, he says.

For instance, companies can offer unrestricted grants or stipends for patients groups to fund community moderators or software and servers.

“Where I’ve seen a lot of communities die is if they just don’t know how to police the content, and that’s where some training courses could be developed,” deBronkart says.

“Certainly one thing pharma knows how to do is put together a curriculum.”

As patients become more empowered and aware of trials that are saving lives, the pressure on the regulatory process could magnify.

“One thing that ties pharma’s hands enormously is the regulatory process,” deBronkart says.

“Imagine if consumers start demanding a change in policy so that more drugs get approved sooner.”

For more on empowered patients, see ‘E-patients: Educated, engaged, and empowered’, ‘Adherence and the empowered patient’, ‘It's time for patient power to get real’, and ‘Making patients part of the pharma conversation’.

For all the latest business analysis and insight for the pharma industry, sign up to eyeforpharma’s newsletters.