Learning to Trust: with Murray Stewart, CMO at GSK

Murray Stewart on improving reputation & how GSK has altered its business model to enhance its relationships with HCPs and patients. 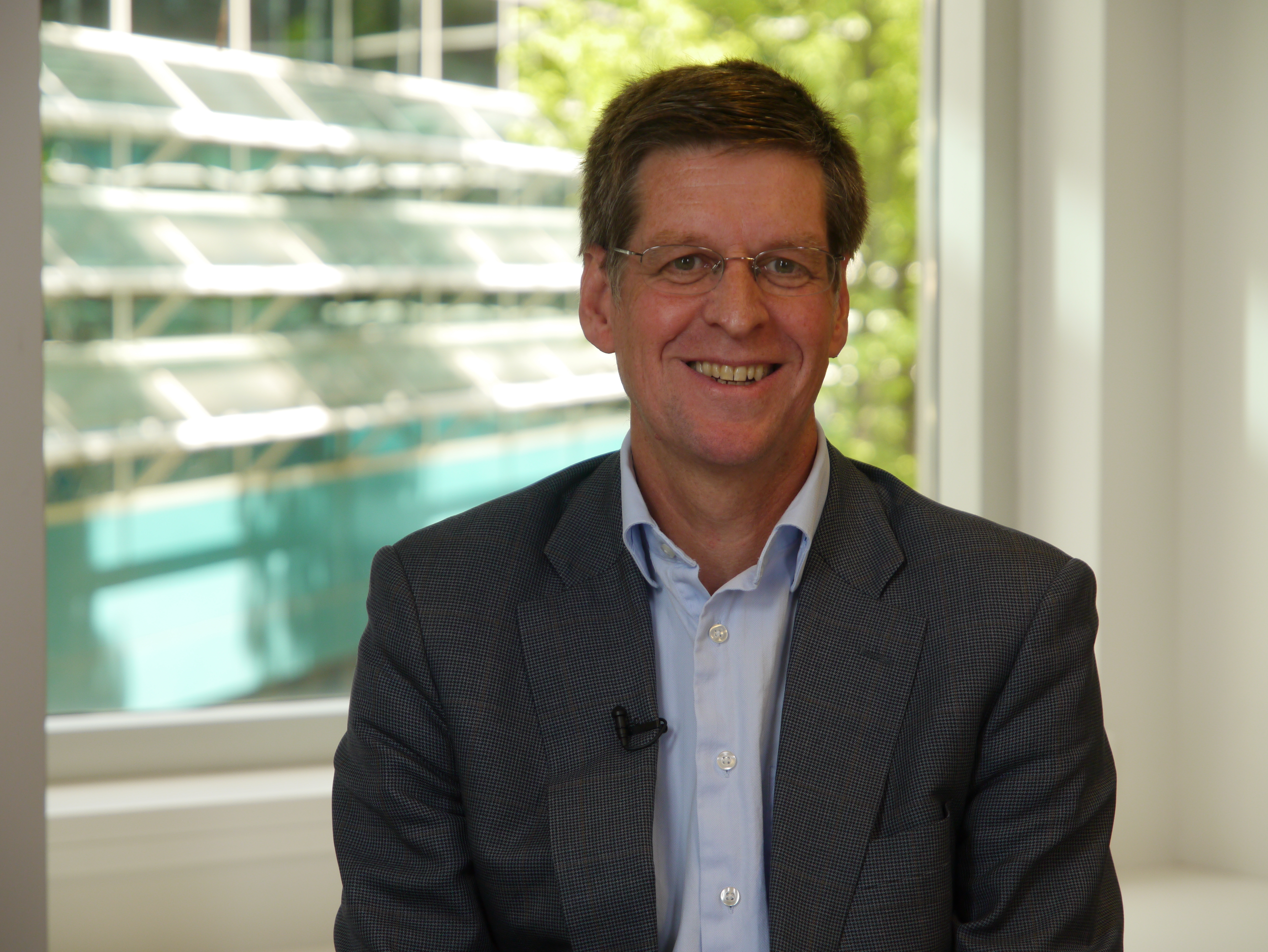 GSK caused a stir when it became the first major pharma company to stop paying doctors to promote its products and by fundamentally changing the way its medical sales reps do business, basing their incentives on product knowledge and other ‘softer’ measures rather than the prescriptions they persuade doctors to sign.  This followed the company’s earlier advances in making clinical trial data available, including patient-level data, ahead of the broader industry.

While GSK began its shift towards improved data transparency back in 2004,  it is clear that 2013’s revelations in China and improper marketing allegations in the US have been strong motivators for further change at GSK . The scars from these corporate disasters are not just on the balance sheet:  GSK's Chief Medical Officer, Murray Stewart recognizes fully that it is hard for patients to trust a company which has been in the spotlight for all the wrong reasons.

With this in mind, Stewart must have one of the most important but toughest jobs in pharma: he considers himself responsible for improving patient trust. In a frank interview ahead of his appearance at eyeforpharma Philadelphia, he explains how the company has learned from past mistakes and why his priority is now to build better communication lines with both patients and physicians. “Trust can only be built - and pharma’s reputation improved - when pharma companies go on to fulfill their promises,” he says.

Stewart’s minimum requirement, like any CMO, is to ensure the correct drug and its associated information reach the patient successfully. But that is far from all: he  is adamant that a key part of his job is also to ensure all staff understand that they must be completely in tune with the needs of patients. This applies to those who do not see themselves as directly customer-facing just as much as it does to employees who are out in the field. “After all, as a pharmaceutical company, our main job is to make a difference in patients’ lives,” he explains.

Safety is clearly a crucial part of Stewart’s role. Barely a month before our interview, Biotrial tested a compound developed by the Portuguese firm Bial in France, resulting in one volunteer being rendered brain-dead and others hospitalized. Such events are sure-fire blows to building trust in a process that is at the center of advancing medicine – but Stewart reiterates that transparency and following through on promises will prevail, eventually providing the answers to rebuilding this trust.

“One of my roles as CMO is to review any trials we start,” he says, and describes the events as “a wake-up call for the rest of us; to re-examine our procedures and make sure that everything proper is in place to reduce or eliminate risk. We take time to understand how the drug works, looking at the animal data before we move to human trials. We weigh up very heavily the balance between efficacy and safety.” He emphasizes the importance of consent forms so that volunteers understand both the risks and benefits involved. GSK also now publishes all data at the end of trials, in the belief that transparency is another vital component of building trust. 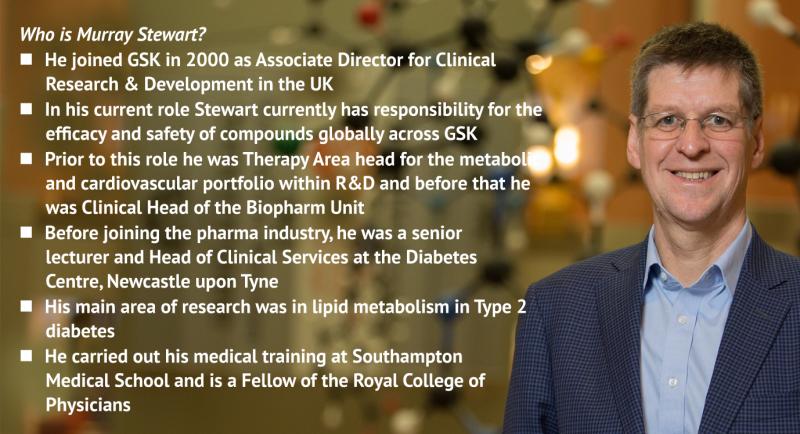 This increased transparency is one of the key ways in which pharma’s landscape is changing. Others include patients’ increased empowerment when it comes to managing their own health, and the shift which has seen more manufacturers moving towards collaborative risk- and profit-share models.

The industry is also having to adjust the channels and content of its interactions with HCPs. Stewart, who is a doctor himself, believes physicians tend to want information on drug profiles, safety parameters and what a drug means for their patients. Increased use of digital communication allows a company’s relatively small medical team to speak to large numbers of doctors, perhaps through webinars or social media and peer-to-peer conversations. “We can communicate with a small number of doctors internally who then communicate with a large number of doctors externally,” Stewart explains. This is not only efficient but is a far better way of providing educational gains, he believes.

On a macro scale, greater use of technology should be taken as an opportunity to build partnerships. Google, for example, is increasingly getting involved in medical innovations, which is both exciting and frightening for Stewart. On the one hand, patients are able to locate the smallest details about a drug or a disease. On the other hand, there is no filter and too much information could lead to patients taking the wrong medication.

“It, therefore, makes sense to share expertise with companies like Google that have the tools to reach the customers of pharma,” Stewart insists. “GSK offers the technical know-how, the drug development understanding, and the clinical judgment while other companies offer a straight-away form of communication available night and day on any platform. Partnerships work as long as both sides share the same vision of improving health services and establish a balance between their respective competencies to produce efficiencies that ultimately benefit the patient.”

GSK’s highly-publicized move on payments to doctors and the further enactment of the Sunshine Act in the U.S. encouraged GSK’s rethink of its customer sales programs. In a world where patients and physicians can access the information they want when they want it, GSK now starts by asking physicians: ‘What kind of information would you like?’

Stewart predicts major changes as physicians demand more information at the time and location of their choice. The future medical sales rep will be “far more personalized to the needs of individual physicians… and will be supported by the opportunity to facilitate a more in-depth, scientific conversation between doctors and GSK’s medical team”.

GSK’s incentive scheme for reps is, therefore, far more about motivating the sharing of knowledge, Stewart insists. “By using educational incentives, our medical sales reps are immediately more comfortable with information, and, therefore, more relaxed and authoritative in their communication of the medical information,” he says. While results were admittedly slow in coming, Stewart reports that there has been a decisive turnaround in GSK’s primary U.S. market and plenty of qualitative evidence of improved communication and relations with physicians.

GSK has also recently installed a new initiative, ‘Click to Chat,’ where an inquiring doctor can contact a company’s physician to get detailed technical and scientific answers to queries that could not be answered by the salesperson. 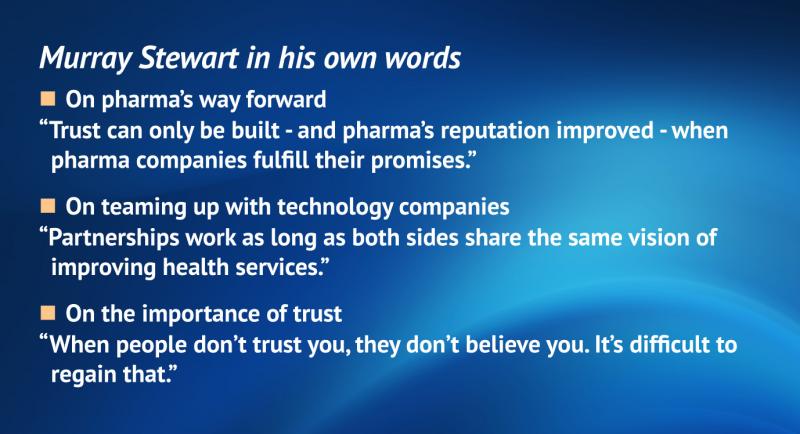 Stewart is experienced enough to know that  building greater trust will not be easy for GSK, but if everyone keeps their eye on doing the right thing, benefits will eventually materialize. “We need the strength to keep going, to show that we are doing the right thing for the right reasons,” he says. “The challenge will be waiting for people.”

He argues that pharma companies can get distracted by politics within the industry. In fact, to rebuild trust in pharma, you need to take control of the industry’s direction and refocus on the patients’ needs. “When people don’t trust you, they don’t believe you,” Stewart concludes. “[This is] one reason why eyeforpharma’s platforms and conferences are absolutely necessary. It’s difficult to regain trust - as we have seen, it takes effort and resilience. We need to change the perception of pharma, but we can only do that together.”

Murray Stewart will be on the keynote stage at eyeforpharma Philadelphia on May 2nd.