Today we announce that nominations are now open for the inaugural Barcelona Awards. The newly created awards differ from other pharmaceutical award ceremonies: instead of focussing on sales and marketing performance, the focus is on patient service, customer centricity and innovating for value. 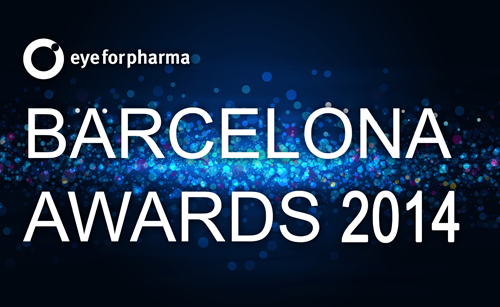 Nominations for the awards will be open until 20th December 2013, at which point a hand-picked panel of celebrated industry experts will decide the winners.

The ceremony will be held on 18th March 2014 at next year’s flagship conference, eyeforpharma Barcelona - the largest commercial pharmaceutical gathering in the world. The event will be attended by representatives from all of the big pharmaceutical companies including Novartis, Pfizer, Merck, Bayer, UCN and Grunenthal.

Designed to recognise the true value that the industry provides, and champion those who are making progress, the inaugural eyeforpharma Barcelona Awards aim to cut out the usual ‘best sales rep’ or ‘best digital campaign’ accolades which already exist everywhere, and focus on what really matters to the future of pharma today.

To further increase the authenticity and impact, every award will have customer judges (patients, physicians and payers) as well as industry heavyweights.

Speaking on the eve of the awards launch, eyeforpharma Chairman, Paul Simms, highlighted the unique approach the newest industry gongs will be taking, "the eyeforpharma awards are judged by the people that matter, on what really matters to better healthcare."

He added, "pharmaceutical companies have recently made great strides towards pushing for customers to become the core focus within the industry. But there is a lot of talk – we need something that pushes beyond the usual commercial KPIs, bringing holistic approaches and outcomes-based action to the fore. We at eyeforpharma have celebrated and championed a customer-led approach for years now, however we feel by recognising and applauding successes and innovations within these areas we further encourage individuals within the industry to take that bold step into a far greater future, in turn becoming more relevant to evolving healthcare needs."

"The awards ceremony serves as a benchmark for those who intend to affect change within the industry. A nomination in one of the awards categories means that your peers have deemed you to be a model for customer-centricity and a champion for positive change, for this reason it should be source of great pride, recognising your achievements within your field."

The six categories reward those who are deemed ‘most valuable’ by the international panel of customer judges. These include “Most valuable patient initiative or service”, “Most valuable HCP or healthcare initiative”, “Most impactful payer or access initiative”, “Most impactful emerging or global initiative” and the “Customer Innovator Award”. The final award, “Lifetime Value Achievement”, will be selected and determined by a free vote from the judges, based on a consistent and determined approach to innovation, resilience and value creation over many years.

Nominations are now open and close on 20th December 2013. Judges are currently being confirmed and the full panel will be announced in the coming weeks.

Visit www.eyeforpharma.com/barcelona/awards for more information and to register your nominations.