Deirdre Coleman investigates diabetes epidemic currently sweeping the globe, its cost to healthcare worldwide and the role the pharmaceutical industry can play in halting the progression. 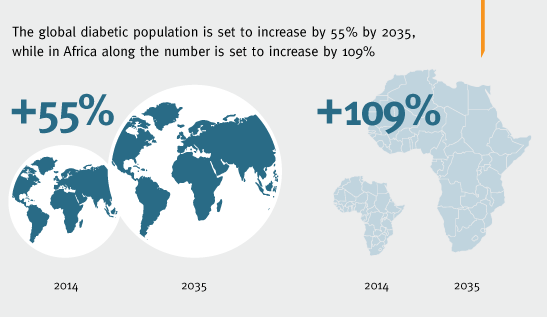 The latest figures from the International Diabetes Federation’s atlas, published to mark World Diabetes Day back in November, suggests 382m people – more than 8 per cent of adults globally – have the condition, triggering health spending estimated at $548bn in 2013 alone and causing more than 5 million deaths a year. To put that into context, there are now more diabetics than the entire population of the United States and current spending to fight and treat the disease now equates to $78 for every person on earth.

By 2035, the IDF forecasts that the number of cases will reach almost 600 million, when one in every 10 will have the disease.

“Despite the array of tools at our disposal ... the battle to protect people from diabetes and its disabling, life-threatening complications is being lost,” warns the IDF, an umbrella body of national diabetes associations that receives funding from the pharmaceutical industry.

“This is probably the biggest epidemic in human history,” says Prof Zimmet, director emeritus of Baker IDI Heart and Diabetes Institute and programme committee chairman of the World Diabetes Congress, which took place in Melbourne, Australia in December. “Each time there’s a prediction, it’s been an underestimate.”

Early intervention and avoidance or delay of progression to Type 2 diabetes is of enormous benefit, both to patients in terms of increasing life expectancy and quality of life, and potentially in economic terms for society and health-care payers. Pharma plays a critical role in stemming the spiraling diabetes epidemic; improving the health outcomes of people with diabetes, preventing the development of Type 2 diabetes and research into improving the treatment of diabetes are three critical areas where pharma can have most impact. Healthcare reform and a shift to a value-based model are key drivers in shifting the role of pharma in the direction of preventative care and public health advocacy with online and community-based educational and awareness programs and adherence initiatives using web and mobile technology playing a pivotal role in the fight against diabetes. (cont...)

According to the IDF report, China, India and the United States top the list for the most cases of diabetes per country; around 24.4 million Americans had the disease in 2013. But islands in the Pacific have the most alarming rates of prevalence, or the number of cases compared to the country’s population overall. For example, 37.5% of the population of Tokelau, located northeast of Fiji, has diabetes. Micronesia, Saudi Arabia, Kuwait and Qatar also reported higher-than-average prevalence rates. A large part of this is due to the growing obesity problem; while all types of diabetes are on the rise, the number of people with Type 2 diabetes is expected to double in less than 25 years.

A person with type 2 diabetes can live for several years without showing any symptoms. But during that time high blood glucose is silently damaging the body and diabetes complications may be developing. The complications associated with diabetes are so varied that even when symptoms do exist, diabetes may not be recognized as the cause. When people have long-standing undiagnosed diabetes, the potential benefits of early diagnosis and treatment are lost. Furthermore, the costs related to undiagnosed diabetes are considerable. One study from the USA found that undiagnosed diabetes was responsible for an additional USD 18 billion in healthcare costs in one year.

Diabetes imposes a large economic burden on individuals and families, national health systems, and countries. Global health spending to treat diabetes and manage complications totaled at least USD 548 billion in 2013; by 2035, this number is projected to exceed USD 627 billion. The USA spent USD 239 billion of its health dollars on diabetes, or 36% of global health expenditure.

The rise in obesity is the leading cause of the staggering rise in type 2 diabetes. However, according to Professor Paul Zimmet, maternal nutrition also plays a key role in certain countries predisposition to the disease.

“Changes in human behaviour and lifestyle associated with globalization have resulted in a dramatic increase in the prevalence and incidence of type 2 diabetes globally. Until recently, there was a strong emphasis on genetic susceptibility, and on environmental and behavioral factors such as a sedentary lifestyle, overly rich nutrition, and obesity (particularly central adiposity). More recently, focus has shifted to the potential contribution of the maternal environment and the impact of in-utero influences, i.e. the role of epigenetics (processes that induce heritable changes in gene expression without altering the gene sequence). This may be an important factor in the very high prevalence of type 2 diabetes now being seen in nations such as India and China, two countries that numerically bear the main brunt of the epidemic”, explains Zimmet.

“The intrauterine environment influences the risk of developing type 2 diabetes. Off-spring from diabetic pregnancies are often large and heavy at birth, develop obesity in childhood, and are at high risk of developing Type 2 diabetes at an early age. This issue is critical to resolve, as programming of offspring adiposity by maternal glucose-insulin metabolism could lead to a “vicious cycle” of increasing childhood obesity and later gestational diabetes over each subsequent generation."

"Quite independently of this, poor maternal nutrition (e.g. in famine regions) also increases the risk of diabetes. Fetal undernutrition is proposed to predispose individuals to insulin resistance and reduced β­cell mass and function, which in turn increases their susceptibility to the development of Type 2 in later life. The risk of Type 2 owing to inadequate fetal nutrition is likely to be exacerbated in people who are exposed to an affluent nutritional environment in adult life and who have excess and rapid weight gain in early adulthood. The link between fetal malnutrition and later type 2 risk in humans is illustrated by the Dutch Hunger Famine birth cohort study, which reported that adults who had been exposed to famine during fetal life had a worse glucose tolerance status than unexposed individuals. Similar findings have been replicated in populations from other regions that have suffered nutritional hardship, such as the Chinese Famine (1959–1961)”, expands Zimmet.

Pharma’s Role in the Battle

According to a Diabetes UK spokesperson, pharmaceutical companies have a key role to play in education: “Up to 80 per cent of Type 2 diabetes can be delayed or prevented through lifestyle changes, such as eating a healthy balanced diet and being physically active, so where possible it is important to support people in reducing their risk of developing the condition. Once people are diagnosed, managing their condition properly is extremely important in order to live long and healthy lives and avoid the devastating complications associated with diabetes. Pharma companies play an active role in supporting educational programs to help people better manage their condition”.

With diabetes being one of the greatest threats to public health in the 21st century, the rationale for strengthening efforts to prevent and control this menacing chronic disease is compelling. Pharmaceutical companies will play a vital role in the fight against diabetes, supporting those diagnosed with diabetes to effectively manage and live with their condition, educating those who are undiagnosed or currently at risk to seek medical help and advice and raising awareness among those who may be at risk in the future to take measures to prevent diabetes onset further down the line.

Governments cannot turn back the tide of diabetes alone. It is not just the costs that justify this argument – it is the very nature of the disease. Its causes are multi-sectoral and the responses have to be equally wide-ranging as well as innovative. The underlying determinants of the rise in diabetes are the same the world over. Economic development is associated with the creation of increasingly “obesogenic environments”. These are characterized by decreased physical activity and greater access to energy-rich diets. Actions vital to respond to these risks go beyond the health sector and require a whole-of-society effort. This fundamental principle was recognized in the Political Declaration agreed by world leaders at the UN Summit on Non-Communicable Diseases (NCDs) held in New York in September 2011. A significant recommendation was for governments to engage non-health actors and key stakeholders, including the private sector and civil society, in collaborative partnerships to promote health and to reduce NCD risk factors.

“Sustained global change in health is likely to require regulation or government intervention. To complement regulation, education is vital to drive behaviour change. Food companies play a huge role in driving change through advertising. Pharmaceutical companies also have a role to play: an example is the World Diabetes Foundation which was set up as an independent, non-profit organisation through a grant from Novo Nordisk, which funds projects focused on diabetes awareness, education, improving access, detection, treatment and monitoring etc.  Pharmaceutical sponsorship of research into educational and preventative approaches is a vital element in this multi-stakeholder approach”, reiterates Zimmet.

It is clear that stemming the escalating epidemic of type 2 diabetes involves multi-stakeholder partnerships that transcend country boundaries and that encompass the key areas of maternal and child nutrition, awareness and early detection as well as improved access to patient-centred diabetes care, self-management education and psychosocial support. Despite the commitments made in 2012 by the World Health Assembly (the setting of a target to reduce preventable NCD deaths by 25% by 2025), many developing countries lack the means to hold their governments to account on progress towards those targets. Diabetes education is widely referred to as the cornerstone of care; and diabetes self-management education has proven effective in lowering complications in high-income countries worldwide. But access to culturally appropriate diabetes education is severely limited in many low and middle-income countries, and non-existent in rural areas of the developing world.

By contributing to educational efforts to prevent and manage the illness, pharma would be helping to slash an already unsustainable budget.